Why does this BJT work as a switch in this logical-NOT circuit, no matter how I orient the emitter and collector? 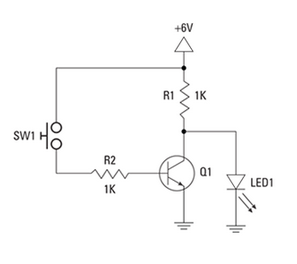 It works quite well. When the the momentary button (normally open) is not pushed the LED is on.
When I push the button, I see the LED turn off.

However, for a bit I accidentally had my 2n2222a NPN BJT transistor (datasheet) oriented backwards so that :

The circuit still worked exactly as expected.
Can someone explain why it would still work the same with the transistor in the incorrect orientation?

The doping levels of collector, emitter, base are different hence the performance will be different. The gain will be very poor and also the voltage that can be applied across the terminals will vary from the datasheet.

Not the answer you're looking for? Browse other questions tagged transistors bjt npn or ask your own question.

3
How do I calculate the base and collector current in this circuit?
0
Is the hfe of a transistor dependent on the resistance on the other parts of the circuit?
0
Comparing sensitivity to temperature changes of BJT (transistor) circuits in Common Emitter Configuration
1
Why does the transistor work with collector and emitter swapped?
3
Inverting a push button
0
What if I switch the place of the load in a common emitter NPN transistor circuit?
0
Latching circuit latches before pushing the latch button
1
Where did the base get the current from?
2
Is this a correct way to use an NPN transistor to disable a push button?