How can I check in an OpAmp datasheet if the OpAmp is push-pull?

I am looking for an OpAmp which I want to use as voltage follower after a DAC. The OpAmp should be able to pull 3mA. And it should have Rail to Rail input and output.

How can I check in a datasheet if an OpAmp supports push-pull?

First I looked at several distributors like DigiKey. Some allow search for rail to rail (it seems that is output). Others also include Push-Pull. I also looked at the TI search page. There are lots of criteria but no Push-Pull. http://www.ti.com/amplifier-circuit/op-amps/overview.html

After comparing several lists from distributors and TI I found the LMH6645 which fulfills all my criteria. In the datasheet it is described as Push-Pull and it shows Output Current: +/- 20mA. I guess the "-" indicates that it can pull up to 20mA.

Another interesting OpAmp is the OPA333. But it does not have the words Push-Pull in the description and no "-" in the output current. Is that the only way to find out that this is not push-pull?

It seems now I found what I want, the LMH6645. My question is: Is there an easy way to search for a push-pull rail to rail input and output OpAmp? Or is it really necessary to spend an hour looking through several lists and datasheets?

And at least for me similar search problems exist with other parts. Is it really necessary to study lots of datasheets to find parts? I think my search criteria are not exactly exotic.

As you seem to be focusing on the Rail to rail aspects, it is necessary to read the datasheet of any potential device.

It would be wise to choose an amplifier where the \$V_{OS}\$ term is well below that to avoid DC offsets.

For this device, \$V_{OS}\$ is typically +/- 1mV (max at 25C is +/- 3mV) so this would not necessarily be my choice of buffer for a DC or low frequency application, but a great deal depends on context.

Leaving that aside, let's see what type of rail to rail input is employed. There are a couple of types with the most common being a dual overlapping input stage. 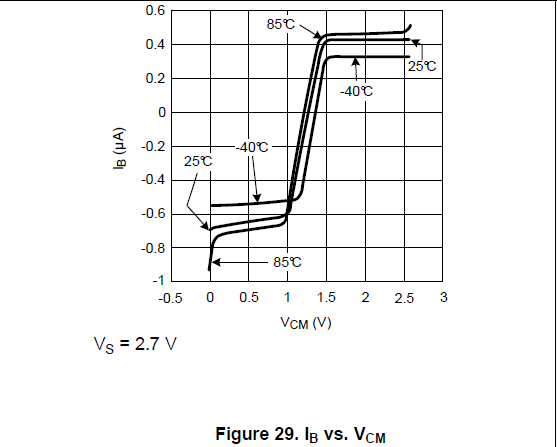 Note that the direction of \$I_b\$ reverses as the common mode voltage is varied; this means that the input is an overlapping input stage (a PNP stage and an NPN stage).

Some text in the datasheet shows that the crossover is not actively steered which means the actual crossover point will vary from device to device and over temperature:

The total input common mode voltage range, which extends from below V− to beyond V+, is covered by both an NPN and a PNP stage. The NPN stage is switched on whenever the input is less than 1.2 V from V+ and the PNP stage covers the rest of the range. In terms of the input voltage, there is an overlapping region where both stages are processing the input signal. This region is about 0.5 V from beginning to the end. As far as the device application is concerned, this transition is a transparent operation. However, keep in mind that the input bias current value and direction will depend on which input stage is operating (see Figure 29). For low distortion applications, it is best to keep the input common mode voltage from crossing this transition point. Low gain settling applications, which generally encounter larger peak-to-peak input voltages, could be configured as inverting stages to eliminate common mode voltage fluctuations.

If you can do that, then this device might still be suitable.

Note: This type of input stage is prone to low level oscillation in DC applications with a high source resistance; whether it would be noticeable depends on input bias current.

Now for the output:

The output can swing to within a low voltage with respect to the power rails (it cannot be zero as there is always some output resistance).

This particular part of a table is from the 5V section of the datasheet and we can estimate the effective output resistance of the device:

If you want to drive 3mA then the closest you will get to the rails is going to be between 60mV and 240mV.

(There are known ways to get down to zero such as providing a negative power supply of sufficient magnitude).

That means that the lowest voltages out of the DAC (assuming 0V is it's lowest output voltage and the buffer is on a single positive supply) will lose at least 20 least significant bits (counts) of resolution.

Other devices may be more suitable in this application and there really is no substitute for narrowing the list down and then doing a pretty deep dive into the datasheets to see which device is the most suitable for a given application.

The details of the application specific data are not going to be in any of the parametric tables at the various vendors (that is what the datasheet is for).

So we really cannot narrow the search down further before having to look at the datasheets (thankfully now that is not nearly as tedious as looking through the physical databooks - I remember those times well!).

For this particular application (and assuming I can live with not getting closer to the power rails than < 100mV) I would probably choose an old favourite - the AD8615 (there are many devices that would be suitable; this is simply one I have used in this sort of application in the past).

THis is just an example.

when searching for product, in Digikey, or Fanrell, or Mouser or other supplier, you can choose the output type:

Even after that, do a sanity check once with the chosen part datasheet.

The answer from Peter Smith has a lot of information and it helped me to understand which parameters I should look for. This is why I accepted his answer.

On my search to find a suitable OpAmp I discovered the Texas Instruments "Search by circuit function" here http://www.ti.com/amplifier-circuit/op-amps/precision/products.html

I think that is very helpful because it allows the user to set for which circuit you search an OpAmp and then it shows lots of input parameters exactly for that circuit. I.e. in my case my search looks like this (this is only part of the search). 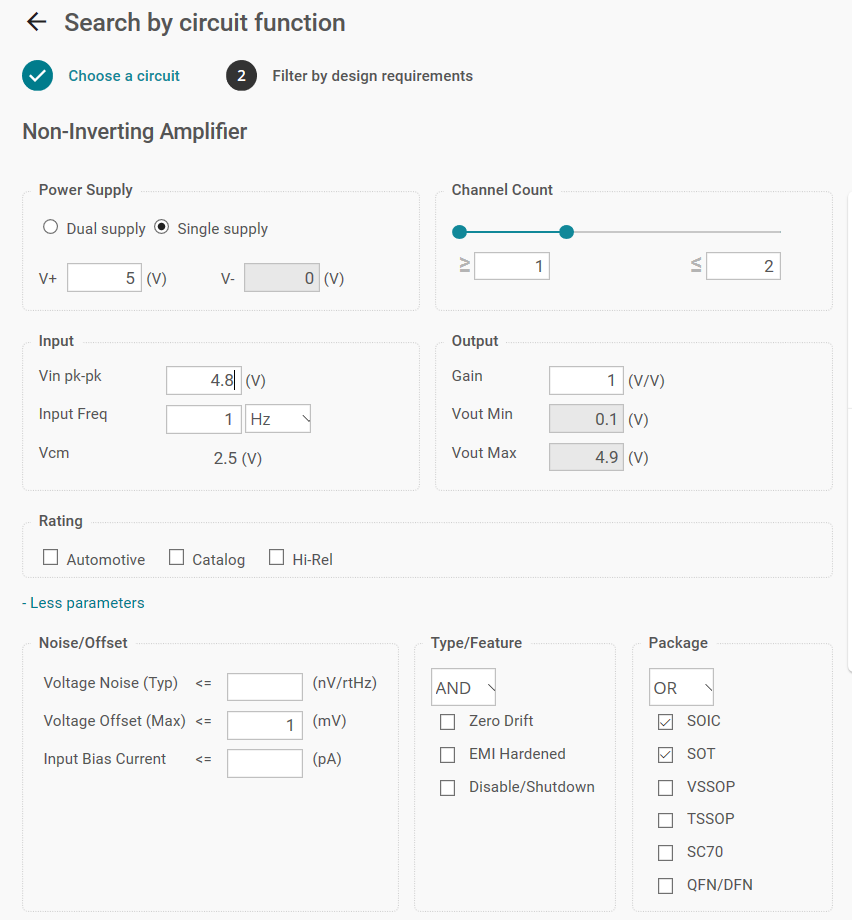 The search also allows to set the output current which helped me to narrow down the list. Now I still have to look into the datasheets especially at the parameters which Peter Smith explained. But at least I narrowed the amount of possible OpAmps down a lot before I have to look at the datasheets. 10 of them are a lot easier to handle than 100. ;)

Not the answer you're looking for? Browse other questions tagged operational-amplifier push-pull rail-to-rail or ask your own question.

1
Is this transistor configuration considered "Push-Pull"?
0
Understanding the Kraakdoos Opamp circuit
1
Push-pull configuration over single mosfet
4
Eliminating MOSFET drain voltage spikes in a push pull power supply
8
Unkown distortion in low power push-pull amplifier
2
What is the difference between differential rail-to-rail, push-pull rail-to-rail and rail-to-rail OPAMPs
0
Electronic Circuit with Opamp and Transistor to pull down a reference voltage via a diode. (Voltage Limiting)
4
How does a common-emitter rail-to-rail opamp output stage work? Is there a discrete example?
1
High open-circuit voltage in isolated push-pull SMPS?