What happens: n Hall effect sensors wired in parallel, < n of them is triggered?

This is almost certainly a noob-level question. I only have one Hall effect sensor to play around with so I can't test this out for myself.

Say I have multiple Hall effect sensors wired like this, but their output pins all connect to the same pin on an Arduino. Namely: 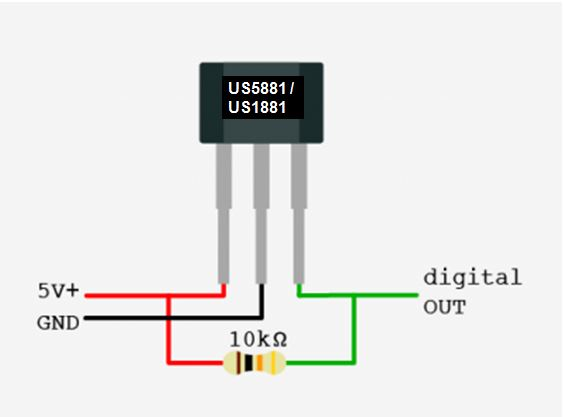 With the pullup, digitalRead()will normally be HIGH, going LOW when a magnet triggers the switch. What I'm unsure of is what happens in the scenario of multiple outputs tied together and one sensor being triggered. Could someone help me understand which of these occurs?

Followup: in the dream scenario where all of them go LOW upon one activating, do they need separate physical pullups, or would it work to have them all tied directly to the Arduino using pinMode(pin, INPUT_PULLUP)?

Edit: I'm not familiar with all the different types, but per Michael's comment I should have included a specific example. I was considering this sensor, the AH3390Q-P-B from Diodes Incorporated. That said, for the sake of generality, if there were specific cases where this would/would not work, it might be useful to specify for other readers.

For two other examples, Adafruit supplies the Melexis US5881 and Amazon seems to almost exclusively sell the Allegro A3144.

The sensors you linked are all open collector or open drain, so they pull their output low, and depend on an external resistor to pull the output high.

The total output leakage current of the sensors may determine the need for an external pull-up resistor, or may limit the number of sensors you can connect in parallel for reliable operation.

Not the answer you're looking for? Browse other questions tagged arduino digital-logic parallel hall-effect or ask your own question.