Sequence Detector forced to wait a specific number of bits

So I have this little problem, where I am supposed to build a sequence detector which is forced to wait a specific number of bits before going into the reset state. It's kind of like pin codes work. You put the whole 4-digit sequence number and in the end it says if the output is true (1) or not (0). An example our professor gave is: A sequence detector waits for 4 bits and outputs 1 if the 4-bit sequence has at least two 1s. If anyone does not mind explaining how to build a system like this or find me a lecture/notes/site/tutorial where I can understand this concept. I can only use Mealy machines state diagrams.

There are shortcuts you can take to minimize the number of states. For example, if you've already got two "1"s or three "0"s, there's no longer a need to maintain the counter with the number of "1"s. Also, history of the sequence doesn't count in your example case; e.g., if you have reached one "1" after two inputs, you don't care if the history that got you there was "01" or "10", so you don't need to maintain a state for each.

Generalizing these things involves truth tables, Karnaugh maps, and tedium. I don't think you really need to do that. In your sequence, you have 2^4 possible combinations of inputs. Brute force will thus bring you to 16 states you can end up in, plus a starting state, plus 2+4+8 intermediate states. Truth tables will show you some duplicate states, so you can reduce.

I've drawn up something real quick. The left to right columns are the number of inputs entered, and the down to up rows basically correspond to how many ones have been entered. I've labeled the states with how many "1" have been entered so far, and you can see where I've reduced duplicate states, as those states are labeled with \$<\$ or \$\geq\$ signs, or have more than one input path to them. You can also see that the arrows with two numbers show that success or failure (given you reach four inputs) has already been determined. Note that I did not include the final step of returning to the starting state. 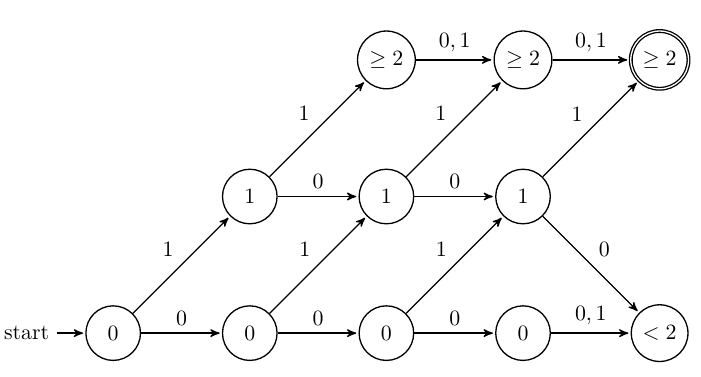 I always find it mind bogging why anybody would write a huge many-states FSM for this sort of code.
In practice I would use two counters:

Both reset if the first counter gets to four. At that same time you output a one if the second counter is above a certain threshold .e.g 2.

Yes, you might use a register or two more then needed, but you save hours in development time and the code will be a lot easier to read and thus to maintain. My guesstimate is that the Verilog FSM code is about ten times bigger than the two counters code.

Not the answer you're looking for? Browse other questions tagged digital-logic computer-architecture pins diagram detector or ask your own question.