I was just reading Electric Power Engineering by Elgerd when I came across these statements about flux I couldn't fully understand:

Why is this so? Shouldn't changing position increase flux in the regions of the core close to it and decrease in the far away areas? Is this the case for air core?

I have trouble imagining what the N-turn coil he's referring to would be placed like. Wouldn't it cause NI going in and coming out both?

Also, what would happen if I change the shape of the iron core itself keeping the cable straight? How would flux change then? 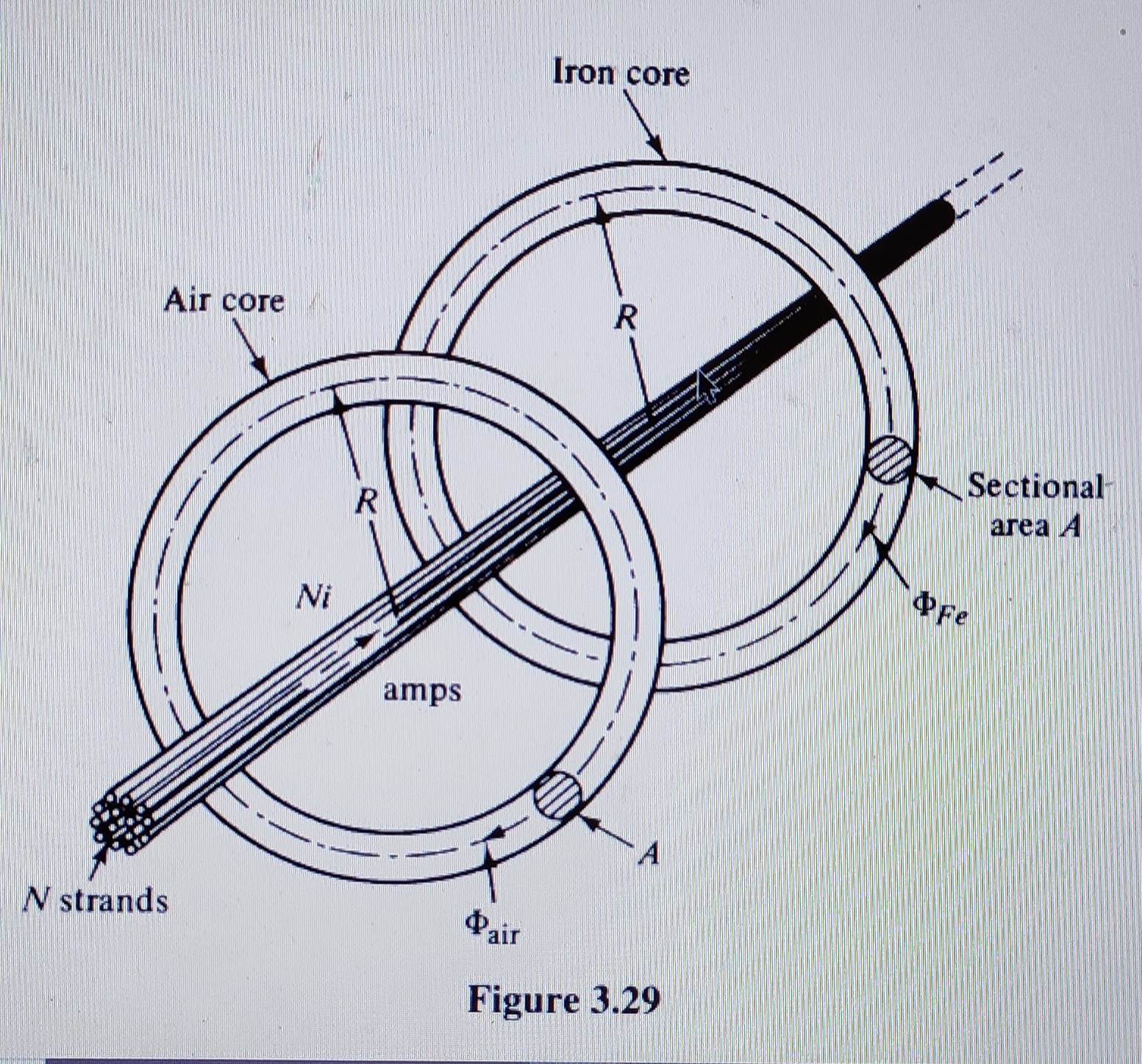 The magnetic core has low reluctance. Low reluctance means that it is a very attractive path for magnetic fields to flow through compared to air hence, most of the circulating flux in the toroid will be constant largely irrespective of the conductor position. This is because the magnetic field strength is dictated by current flow and it is assumed, for this explanation, that current flow is constant.

There will be some flux in the air but, for a high permeability core (low reluctance) it will be a small percentage.

If you made the toroid extremely large, the path the magnetism travels along gets extremely long and reluctance increases linearly with the circumference. If you continued this train of thought, you will get to a point where air carries the most flux because it is seen by the flux as being the preferred path due to it having lower reluctance than the massively oversized and distant toroid core.

See my answer here for a mathematical explanation of how reluctance works in a similar type of problem.

If you have a finite permeability core with an arbitrary shape, then things are very complicated, you'll need to do 3D integration in mixed materials, not fun. In general, the flux varies somewhat with the cable position.

We can make some simplifications under certain circumstances.

1) Core has infinite permeability. All the flux travels in the core, the cable position does not matter at all. The flux is constant due to the topology, that it loops the conductor, and takes all the flux.

2) Core has very high but finite permeability. Almost all the flux travels in the core, and the core flux barely changes as the cable position changes. As the relative permeability of the core gets closer to one, the flux becomes more sensitive to cable position. As a rule of thumb, if the core is iron or ferrite with a relative permeability of (say) 2000, then the change in flux as the cable is moved from middle to edge will be less than 1/2000th, which for most purposes is negligible.

3) Core is air, and the winding is a uniformly wound toroid. This is called a Rogowski Coil. Although the flux in any part of the torus varies as the central cable moves, the total flux linkage, and therefore the voltage induced in the winding when the cable current changes, is constant due to the symmetry properties of the torus.

Even with a circular core, a finite permeability means there will be some small sensitivity of flux to cable position.

Regarding the position of the wire not affecting the result: This can be proven mathematically, but the math is very complicated. A good college professor can most likely do it (I recall seeing it done once). Sometimes, it is best to just trust the conclusions of the experts.

If the shape of the core is not circular, then the symmetry is lost, and the position does matter somewhat.

Regarding an air core: The rule still applies for the area defined in the figure. However, the amount of flux in this area is much, much less. The flux is not contained in this area. An iron core is useful because the flux will mostly be contained within the iron core (path of least resistance). Then, secondary windings can do something useful.

Not the answer you're looking for? Browse other questions tagged magnetic-flux or ask your own question.

0
Question for increasing the Flux of an electromagnet
0
How do you calculate the VA of a toroidal transformer core?
12
Do all inductors produce 1 weber after one second when 1 volt DC is applied?
3
Magnetic field strength and flux density from hysteresis curve
1
Magnetic path length for partially wound toroidal transformer core
0
Determining magnetic flux density of a closely wound toroidal coil
3
What impact does winding tightly versus loosely have on transformer performance?
0
Increase emf received from a coil without changing flux source
0
Mean Free Path of Magnetic Core
3
Magnetic flux density in a point