I'm routing traces between a microcontroller and a TFT display (24-bit RGB, clock frequency at 18 MHz).The stackup is:

Components are only on top in order to reduce manufacturing cost (it also explains the choice of a 4-layer stackup).

I designed a first version of this board which worked fine and allowed to develop and test all the software. Now, I'm currently designing a new board version which some mechanical constraints. Some signals were a bit noisy but display worked fine. I would like to improve the routing a bit.

I see two different strategies to route the signals between the MCU and the display. I guess it is understandable that I cannot route only on the top layer even though it would be ideal... The screenshots below are only first drafts and not layout for production. 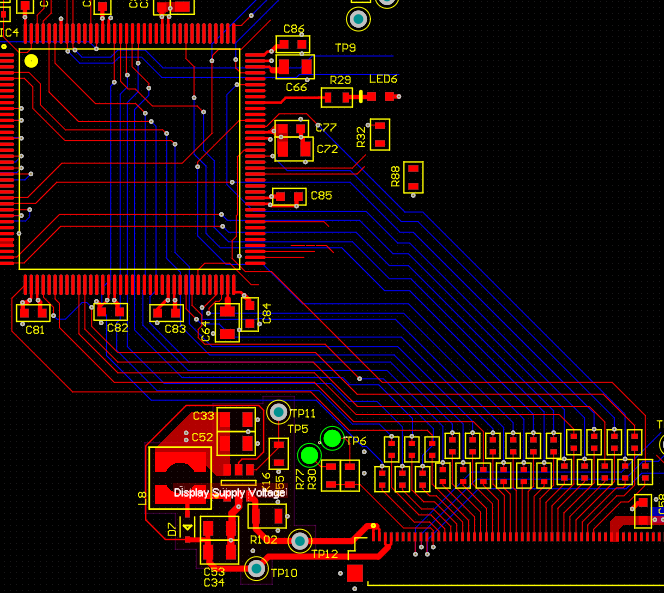 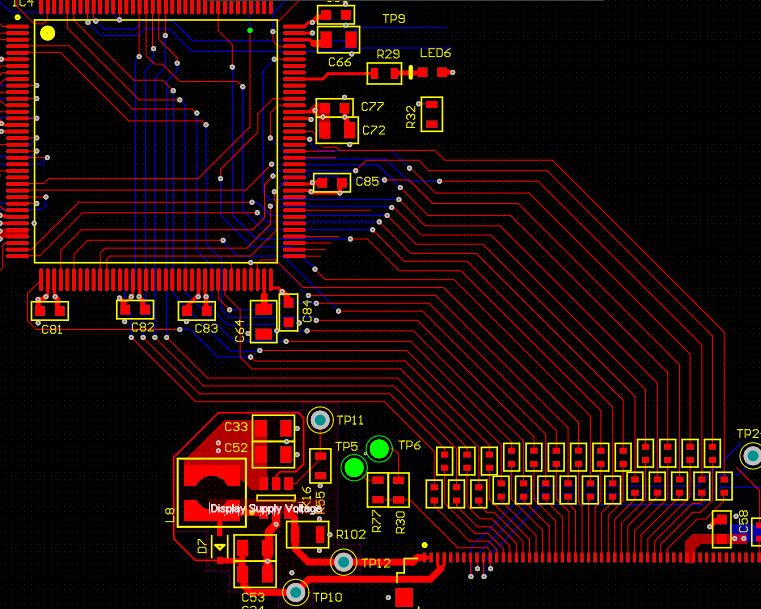 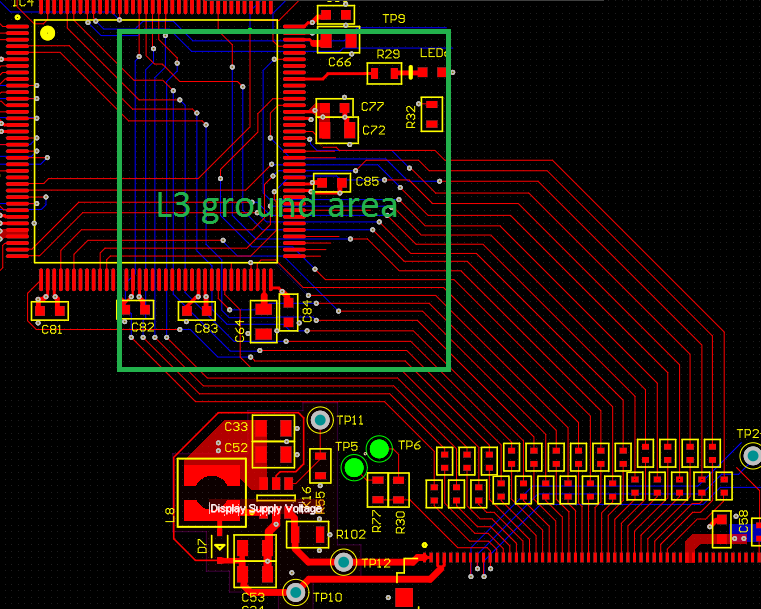 EDIT 1: Even though the question is not about length matching, I give the numbers here to justify why I didn't do any length tuning.

For a signal speed in PCB is 15 cm/ns and an allowable skew of a quarter of the period, it gives 2 meters. I believe the mismatch of 3 cm in the examples above is not important.

EDIT 2: Quick measurement of a data line (purple) and a clock line (yellow) on the current board with a screen connected and running (it is not a proper 10/90% measurement). I don't really trust these numbers because it is a 100 MHz scope with a 100 MHz probe (20 pF probe). However, it seems to fullfil the 12 ns setup and hold time requested for the screen. Drive strength on the MCU is at the lowest settings (it divides the rising time by two at the highest setting but it introduces some ringing as much as the scope can tell). 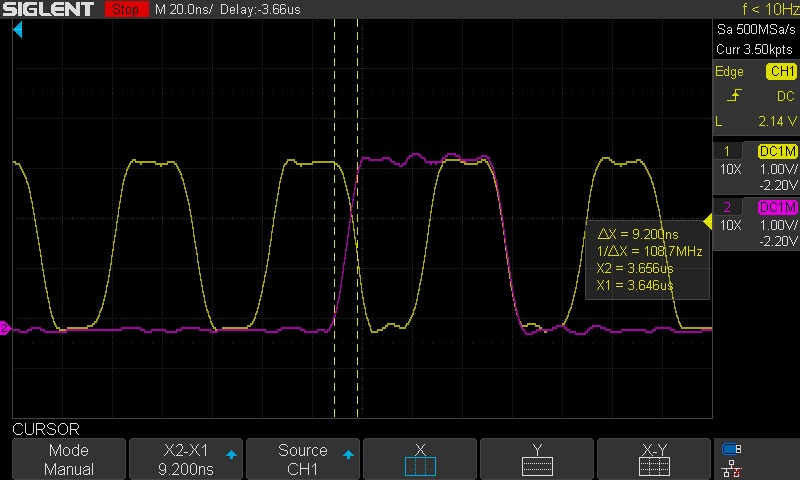 This figure is from the first revision of the board with a layout close to option 1 but with signal lengths 3 cm shorter and a mismatch between lines of 3 cm. Screenshot below. 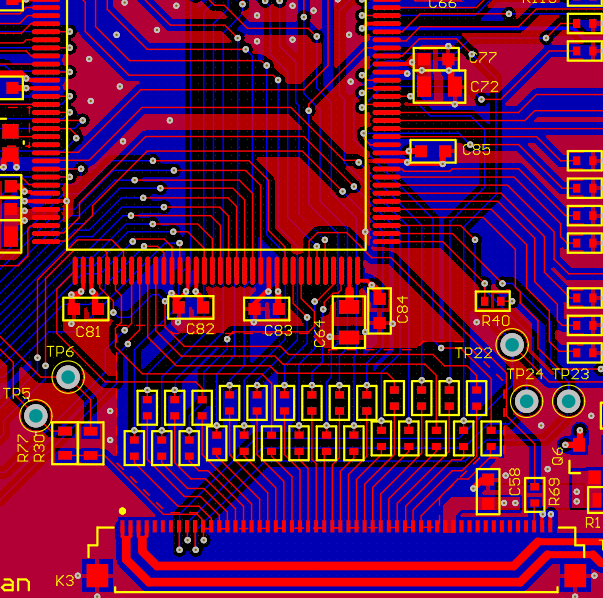 Since my last edit, we had the board manufactured. We went for the simplest way possible. We didn't length match the signals, we didn't use controlled impedance PCB, we had a solid ground plane in L2, solid 3.3 V plane in L3. We routed based on option 2 with the vias close to the MCU. Testpoints were added on the bottom of the PCB for each line (for testing with a bed of nails).

The board was functional. We had the chance to go through EMC tests for the CE mark (for home products). The board passed the radiative immunity tests (criterion A since everything was functional) and the radiative emission tests (30 MHz to 400 MHz). Some harmonics from the 25 MHz oscillator (used for the MCU) was actually visible (starting at 425 MHz, 450 MHz, 475 MHz, etc.) and not far from the limits for the CE mark. After some testing, the problem seemed to be gone without the screen connected to the board. We ended up replacing the O ohm resistors on the RGB and clock lines by some ferrite beads. That gave us an extra margin of 5 dBV/m on the worst peak.

I cannot tell that the board was routed the best way possible but it seems to be enough for our requirements. I hope this result will be useful to other people.

Is any of these options better from the point of view of signal integrity/EMC?

Assuming your RGB signals are somewhere between 1.8V and 3.3V logic and given the fact there are single-ended signals, they will be prone to emission. If this is indeed on your concern list, I would recommend a couple of options which I've used in my past experiences:

Note that if you have a perfectly shielded enclosure, do NOT put too much thought on these as you may just be fine relying on that faraday cage.

Option 2 makes me want to have a ground area within the power plane (L3) and vias between L2 (ground plane) and L3(ground area within power plane), so the return current path can freely jump from L3 to L2 and the other way around (see picture below) Is it something which would make sense? I've never seen such a design choice in other PCB layouts but I didn't see people routing TFT display on L4 PCB either.

It makes a lot of sense, I would do the same thing and clear off the power plane to let ground flow instead. Be sure to use a bunch of vias to tie them up together and you may want to tie the MCU to that ground plane too.

Is there a better way to solve it?

In terms on functional implementation, I would say you are on point here. Just to be sure, have you sized the trace width so that their impedance is 50-ohm (or whatever the target impedance of RGB signals is)?

I would like to mention that the clock frequency isn't what should worry you for the length matching part. You should consider the rising and falling edges of your signals and check to see if your traces can be considered lumped transmission lines, for that I would recommend Howard Johnson's rule of thumb and use this calculator (or make your own): http://fullychargd.blogspot.com/2017/02/transmission-line-rules-of-thumb.html

In this application, I would estimate the rise time to be 2.5ns and the effective dielectric to be 3.2 (for stripline). A mismatch of 65-70mm or lower would do just fine.

One more thing you may want to consider is to add ESD protections near the display connector, in case you are worried about damaging the MCU during assembly or display swap. I know it's a lot of diodes and it could be overkill if your assembly line is up to standards, however, do weight the pain, money and energy waste into replacing the MCU :)

Not the answer you're looking for? Browse other questions tagged microcontroller pcb-design emc routing or ask your own question.

6
Return current in 8 Layer stackup
3
Routing traces over traces in two layer pcb
7
Best layer stack strategy for a 6 layer PCB with mostly SMD components
5
In a 2 layer PCB with a top layer densely populated, from an EMI & EMC point of view should the ground plane be on top, bottom or both and why?
0
Optimum placement, PCB routing for bypass/decoupling capacitors and ground loops
1
4 Layer PCB Altium - 2nd Layer Ground, others Thermal
0
Ground vias use on no-trace areas at a 4-layer PCB
0
PCB 6-layer stackup problem
0
4 layer PCB stackup for motor control board suggestion