I got a Chinese torch with a charger supposedly needed to charge the (removable) Li-Ion cell in it. The connection is direct to the unprotected cell, but the charger shows a spec of 4.2V +/- 0.5V.

Before tossing it away, I wanted to check how was made, to see how much cheap it was and possibly learn something out of it. So I tried to devise its schematic:

EDIT0: missing connection to the BJT's base from the Zener. 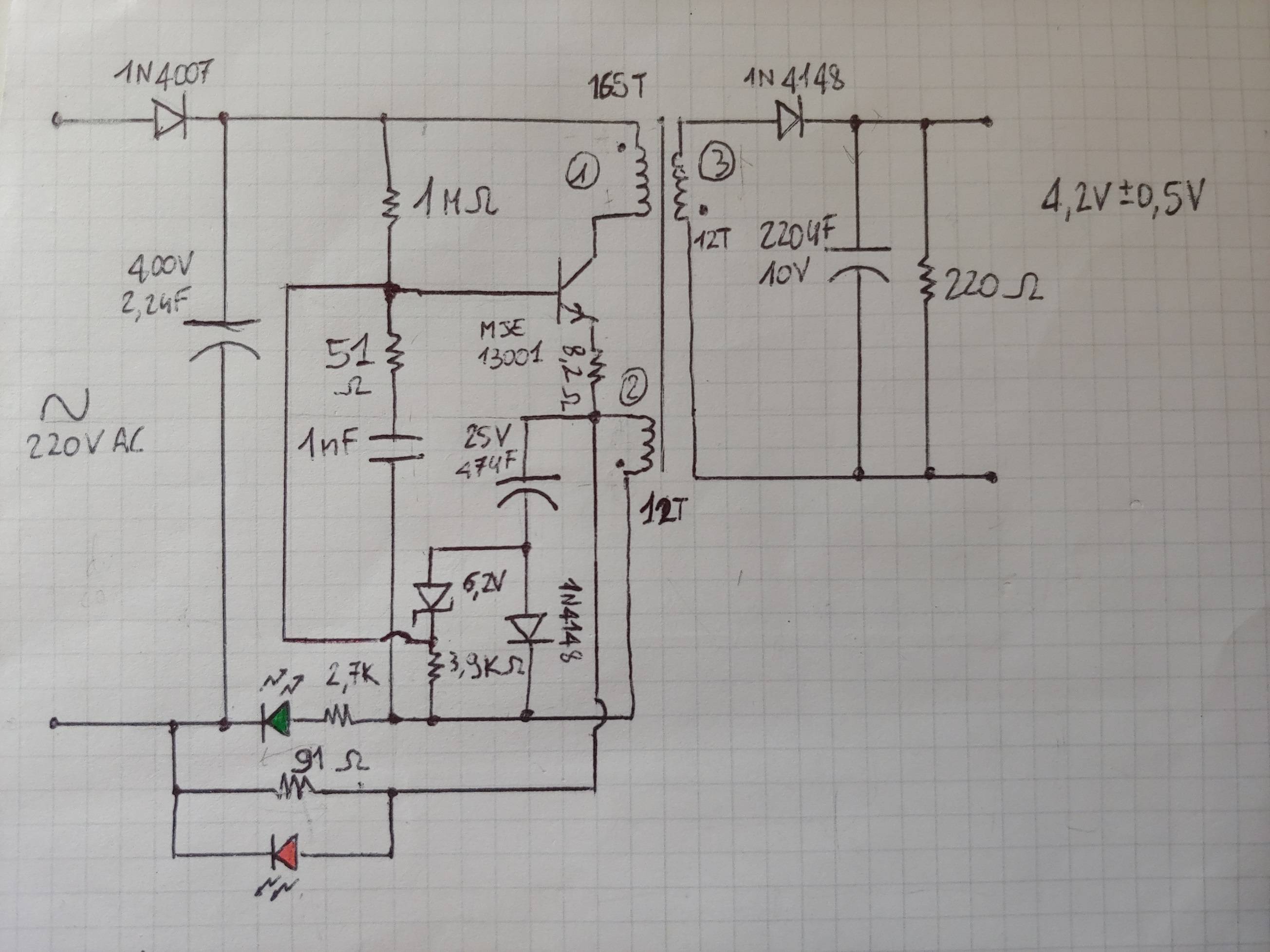 If it is correct, seems to be an RCC power supply with indirect regulation. What I am not sure is, among the correctness of the schematic, how the GREEN and RED LEDs are working. From a user perspective, the GREEN is "always-on" and RED turns on proportionally to the output power. I also found very useful this video to get the basics, but the feedback on that one seems different - but the rest of the product, including the torch, was very much the same.

My guess is that during the on-cycle (BJT on), the winding 2 turns-on the GREEN LED and closes the 91Ω resistor. Then, if there is need to provide output power, more energy is stored in the core, hence the off-cycle (BJT fully off) lasts more as the winding 3 has to provide more energy on the output keeping the reverse polarity for longer - energy which I presume was provided during the on-cycle for a longer time as well. So during the off-cycle, the winding 2 will make a current flow through the 91Ω resistor in the other direction, hence dropping enough voltage which is used to turn on the RED LED.

Additionally, I would like to understand, if these assumptions are correct, how that Zener is used to regulate the output voltage (as was used here, for example) - but how in this very schematic? EDIT0: less relevant, as with the new schematic now makes a bit more sense.

So far seems that the 25uF capacitor has no usage here. Also, if the LED mechanism is right, during the off-cycle the return current used as a drop on the 91Ω to lit the RED LED, seems to be blocked by the GREEN LED. So something does not add up, essentially I don't find some returning current path - I also triple checked the schematic, but I am still not 100% sure I reversed engineer it correctly.

I had no chance to probe the circuit, as I am not comfortable to work with high voltages. Feel free to suggest any improvement to the question.

EDIT0: the zener was not correct. Now the schematics is updated and Zener relavant question updated too.

The way I would think of this is that the 25uF capacitor and associated 1N4148 diode form an analog of the output voltage on the mains side of the transformer.

I think there's something wrong with where the zener diode and/or 3.9K resistor goes- it should inhibit the base drive of the BJT to regulate the voltage.

The red LED effectively goes on when the voltage across the 91 ohm resistor exceeds about 2V, so presumably when the current flowing into the battery drops enough the primary current pulses drop enough that the red LED goes out. Probably this only works sort of well for a 230VAC input, and not so well, if at all, for 120VAC since it's measuring primary current pulses.

Not the answer you're looking for? Browse other questions tagged dc-dc-converter inductor flyback or ask your own question.