Do capacitors waste power as heat or whatever on AC?

Capacitors store energy then give it back once required. A perfect capacitor is nearly lossless on DC power because you only fill it once then it keeps energy in it until you discharge it so no power loss to mention, but on AC the capacitors will be charged then discharged all the time which in my theory seems to waste power, is that true? If it is true then how can I measure that loss for a 250V 8000µF capacitor connected to 170V AC power line?

There would be power loss because with real life capacitors, there are parasitic losses, this means that the capacitor can not act as a pure capacitive load in real life, this is mainly because of the building process/materials/sizes. 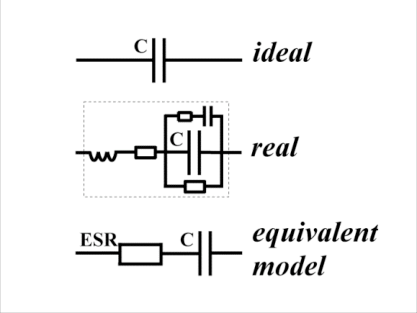 You would need to know the ESR to calculate power loss. But keep in mind that this is a parameter that degrades with component use.

As per the industry standards EIA-463-A, MIL-C-62F, under nominal operating conditions, capacitors are considered completely degraded and not usable in the circuit when it's ESR value reaches 2.8 times of the initial ESR value and capacitance decrease in excess of 20% of the initial value.

There are three loss mechanisms within the capacitor, all of which are fairly minor, and one that it causes to the power supply, which depending on how you're billed for your electricity, may or may not worry you.

Within the capacitor, the electrodes have resistance, which causes \$I_{terminal}^2R_{electrode}\$ losses. The dielectric has a conductivity which is usually very very small indeed in plastic dielectrics, more significant in electrolytics, also causing \$I_{leakage}^2R_{dielectric}\$ losses. The dielectric also has hysteresis loss, also negligible in most plastics, more significant in electrolytics.

The charging/discharging current flows in your supply lines, but there's no nett power transferred to you by this, so most domestic meters will not charge you. This is usually called reactive power, or VAr. Commercial customers may be charged for VAr, as it causes the electricity infrastructure supplier to have invest capital in thicker supply cables than would otherwise be needed. However, as most commercial users tend to have inductive loads like motors, capacitors across the line will tend to reduce their VAr. This is why there is a market in large power factor correction capacitors to be used in shunt with large factories.

An ideal capacitor is lossless, the energy released during discharging is equal to that stored during charging.

No. Pure capacitance does not waste power as heat. Which is why inductive loads such as motors or fluorescent light ballasts are often compensated with capacitors for the loads to look like pure resistance to achieve better power factor. However, non-idealities such as series resistance and dielectric losses do consume energy, so practical capacitors you can buy do waste energy some amount.

Not the answer you're looking for? Browse other questions tagged basic or ask your own question.