I studied several topics and sources on the net, besides Adafruit's own, and decided to try designing my own circuit.

My goal is to develop the prototype of a robot/drone that does not require me to go into surface-mounting and soldering small parts like, for example, the Texas Instruments BQ**** series.

The prototype in question is a low-powered drone of sorts and I have to be conscious of weight. Therefore I am contemplating putting all the charging circuitry into the base-station, at the price of having to lead more wires to my custom charger plug. 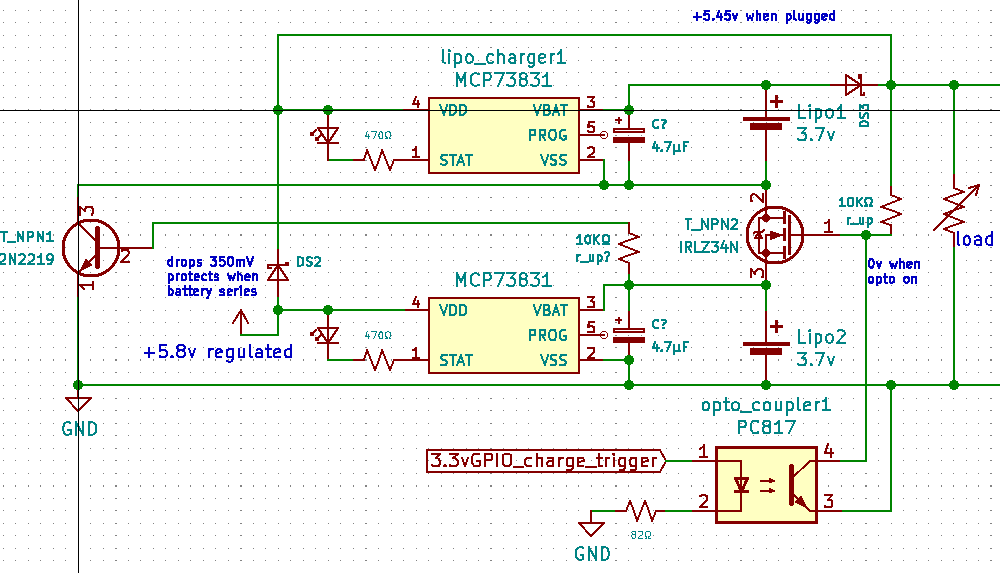 The "must-haves" I identified are:

I am not restricted about what voltage the base-station could provide.

I simulated the part of my circuit that disconnects the batteries when a GPIO-pin is set to high and that seems to work (though I get about 2 V voltage drop, which is really not great).

Do you think it is a good idea to keep pursuing this general design?

For your specific application, I would not try to use this circuit personally. There is nothing wrong with making a complicated circuit to achieve a desired result. But there are numerous advantages to SMD prototyping that you can't get with through hole components. Just to name a few:

If not, do you see a more integrated alternative for charging that does not require me to go into surface-mount-soldering? Or should I bite that bullet?

If you really don't want to do SMD soldering for whatever reasion (financial, time, difficulity, etc), then I would make some modifications to this circuit. 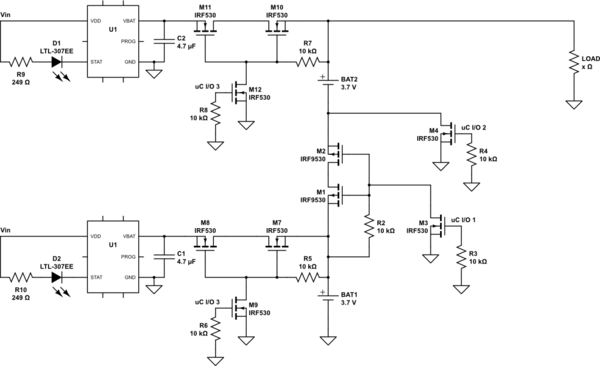 Basically, I took the your schematic and modified it to where the design relied on N & PFET's, and the GPIO's on your uC. The most important thing here is how you trigger GIPO'S 1-3 mentioned in the schematic. When charging, GPIO's 1, 2, and 3 must activate in the following order, with at least 10ms (ballpark guess) of space inbetween: 1 - LOW, 10ms, 2 - HIGH, 10ms, 3 - HIGH.

This is the design I was using for a while in my project. It works to an extent, but you'll have to do some testing on your own to verify it. For the PFET's, make sure to pick one with a Vgs threshold no greater than -2V.

Do you see any obvious beginner mistakes in the circuit shown here?

In addition, I would recommend using MOSFET's for switching purposes, unless you do need a NPN or PNP to turn on a transistor via a current source.

Not the answer you're looking for? Browse other questions tagged circuit-design charging lipo or ask your own question.