Why is there such a large difference in efficiency in these two boost converter configurations? 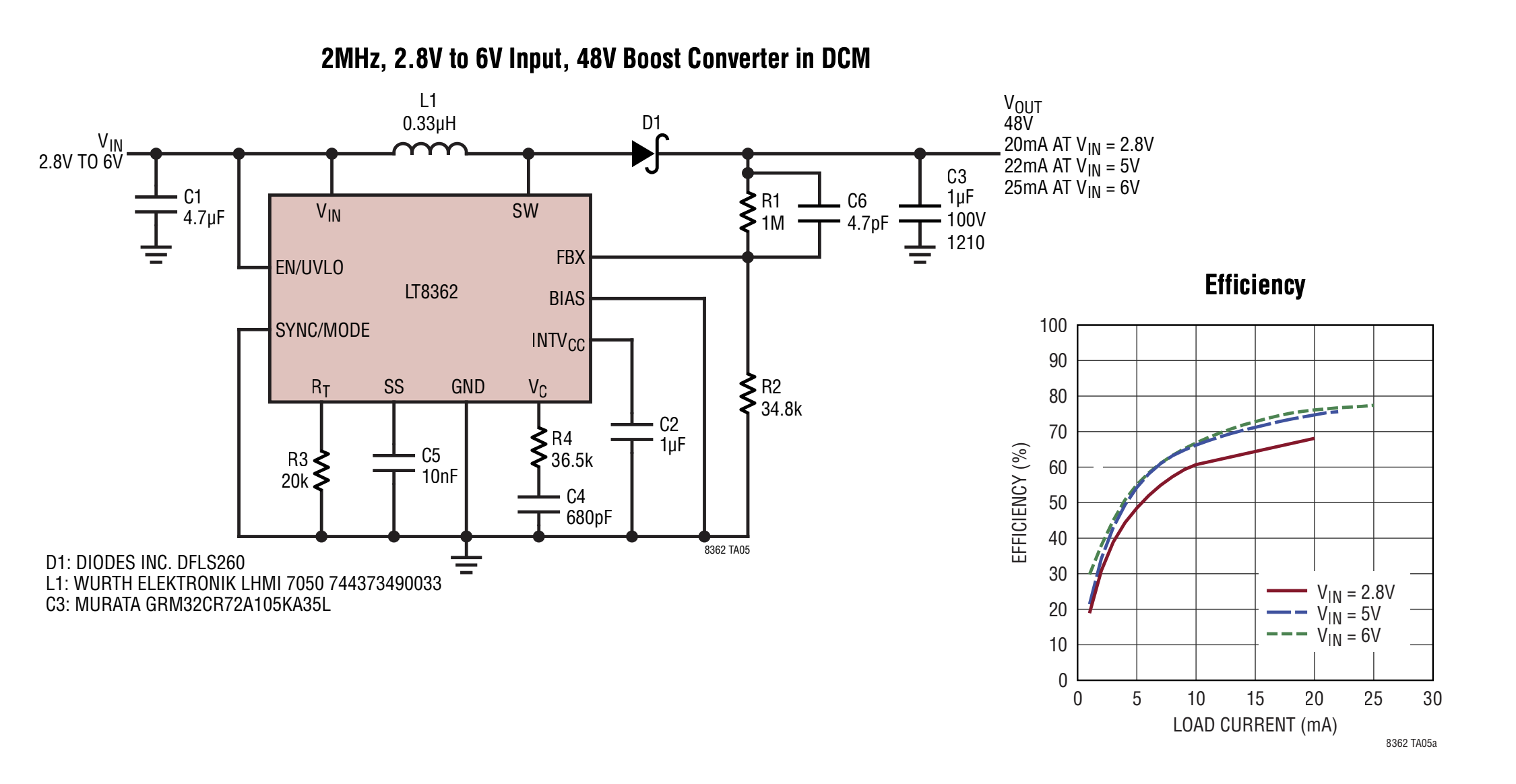 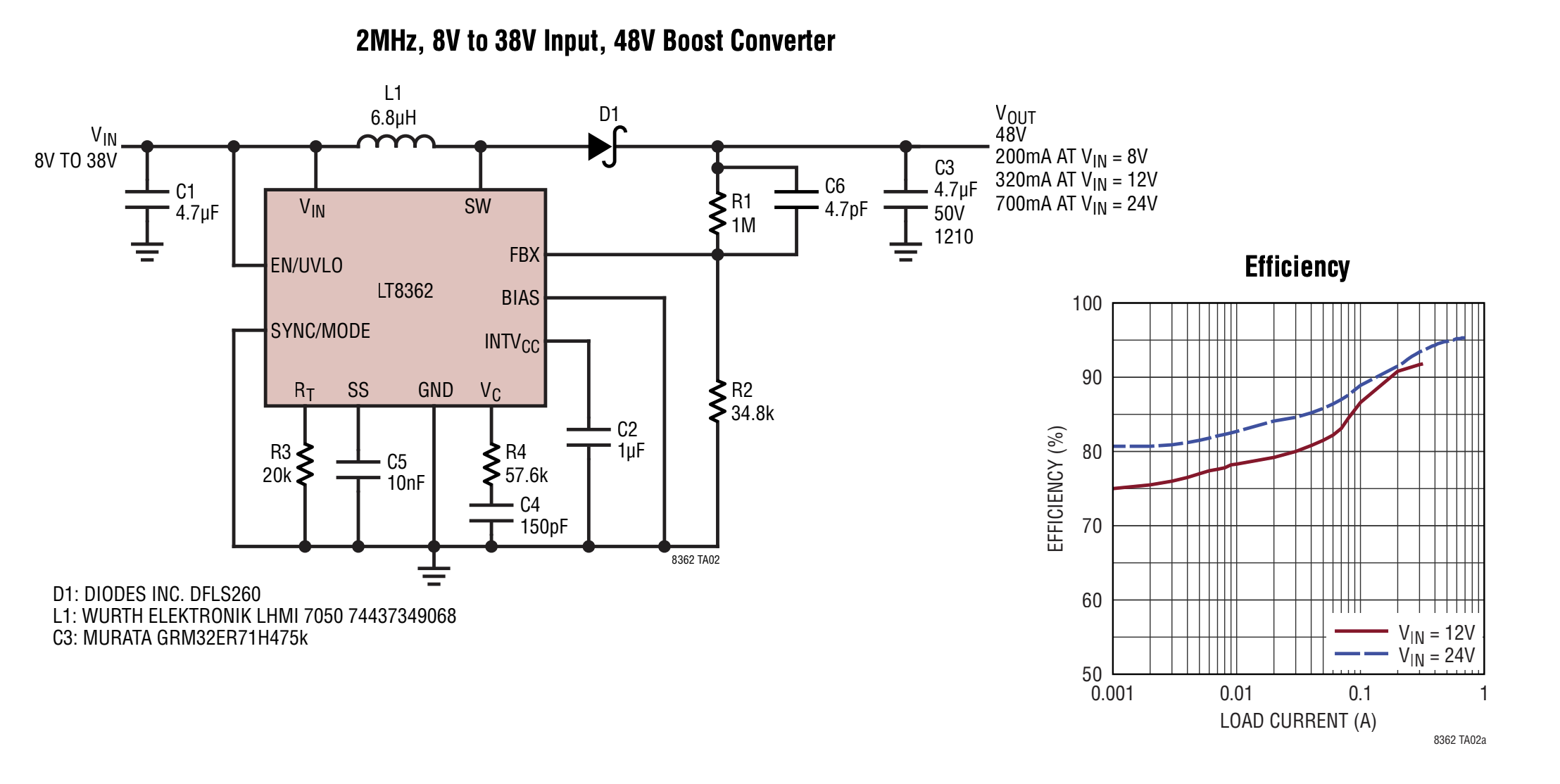 Here is the datasheet

I realize that the converter has to "work harder" to boost a voltage from 2.8V-6V to 48V than it does from 8V-38V to 48V, but I'm curious why there's such a significant drop in the efficiency in the first configuration below 10mA when there isn't a similar drop in the lower configuration. Do boost converters have a certain attribute that doesn't allow high efficiency at low currents? Are some boost converters designed to maximize the efficiency at high boost voltages and low currents?

I'm going to call the more efficient configuration, circuit B.

Note that both circuits are actually the same, only some component values are different:

These two changes are relates, the RC network on the Vc pin influences the voltage regulation feedback loop. The inductor is also part in this loop so if its value is changed then the RC network could require a change as well.

But the main difference is in the inductor L1.

This type of DCDC converter works by charging an inductor (magnetic flux is stored), by connecting a voltage across it (the input voltage). During charging the current will ramp up (linearly). This ramp will be more steep (faster current increase) when the inductor has a smaller value (circuit A).

Inside the IC there's a switching transistor (NMOS M1, page 8 of the datasheet) and this NMOS will have a certain on resistance (\$R_{DS,on}\$). As the current through this switch is higher, more voltage is dropped and more power is lost. So high value charging currents cause inefficiency. There's also the current sense resistor making things worse.

So from this we can conclude that a large charging current will decrease the efficiency. So which circuit will have the higher charging current? Then we have to look at the value of the inductor which is the smallest in circuit A. At the same input voltage circuit A should be the least efficient then.

So why not simply increase the value of the inductor and enjoy a better efficiency?

Yes, that is an option however, as always that has other consequences. Suppose that the input voltage is low but at the same time the demanded load current at the output is significant. Then enough power must be transferred from input to output.

To be able to draw enough power from the input a small value inductor is needed. If a larger value inductor was used the current will ramp up more slowly and less energy is stored in a given amount of time.

So yes you can use a larger value inductor and get better efficiency but then the maximum output current will be smaller. Note how the Efficiency plot for circuit A has an X-axis from 0 to 30 mA while the one for circuit B is from 1 mA to 1 A.

The load current for circuit A needs to be quite small, up to 25 mA only. That is a result of the large \$\frac{V_{out}}{V_{in}}\$ ratio. That is always a challenge (resulting in lower effciency) with this type of converter.

To get better efficiency you can check out the Flyback converter which uses a transformer to aid with large \$\frac{V_{out}}{V_{in}}\$ ratios. Mains adapters mainly use flyback converters to efficiently convert a high \$V_{in}\$ to a low \$V_{out}\$ (and provide mains isolation on the go) but the same principle can be used to convert a low \$V_{in}\$ to a high \$V_{out}\$.

At light loads, the quiescent current of the regulator becomes significant. So efficiency suffers. This does not mean that regulation is poor. Similar to a car with a big engine requiring more fuel even when it is idling or moving slow.

The design with the larger inductor allows the regulator to switch less often at light loads. Between switching events the regulator got into low power standby. It monitors the output, and after a small droop the regulator wakes up briefly and boosts the output back up. This is called burst mode. Similar to a car with automatic start stop to prevent idling.

The LT836x family is known for its low quiescent current, and for its ability to switch fast. This helps light loads efficiency, let's you use small inductors and more easily pass an EMI test.

Also note the output power is much larger for the higher voltage input, thus offsetting the IC static and dynamic current.

Not the answer you're looking for? Browse other questions tagged switch-mode-power-supply efficiency or ask your own question.