If you look at a the shadow mask of a color CRT, you can have a pattern like this: 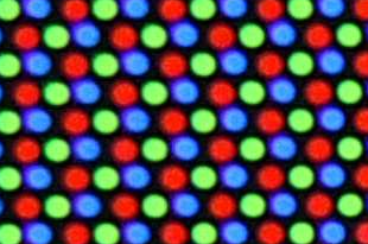 Most TVs were purely analog and had knobs to move the picture horizontally and vertically. How does the green gun stay aligned with the green phosphor in an analog world? it the deflection done by steps instead of continuously? (if that's the case this is probably not linear on flat screens?)

More confusing to me is that these TVs also have image size settings and then I wonder how it worked since, I remember these knobs beings just pots and I don't understand how the guns' beams could still be aligned with the mask.

Refer to @Briandrummond's answer for the original question. As to how the phosphor gets into the exactly correct locations (below from Phosphor Handbook 2nd Edition): 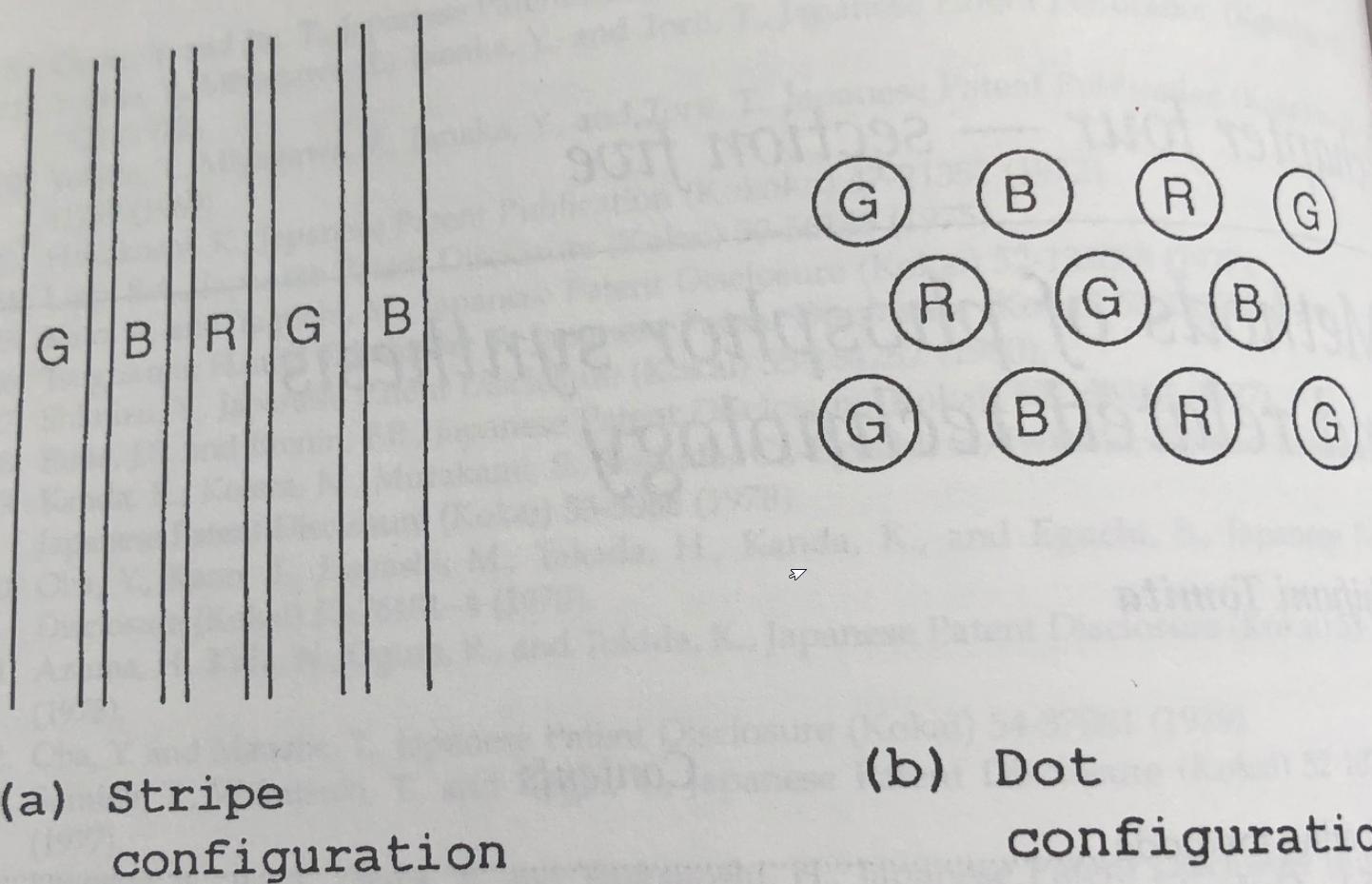 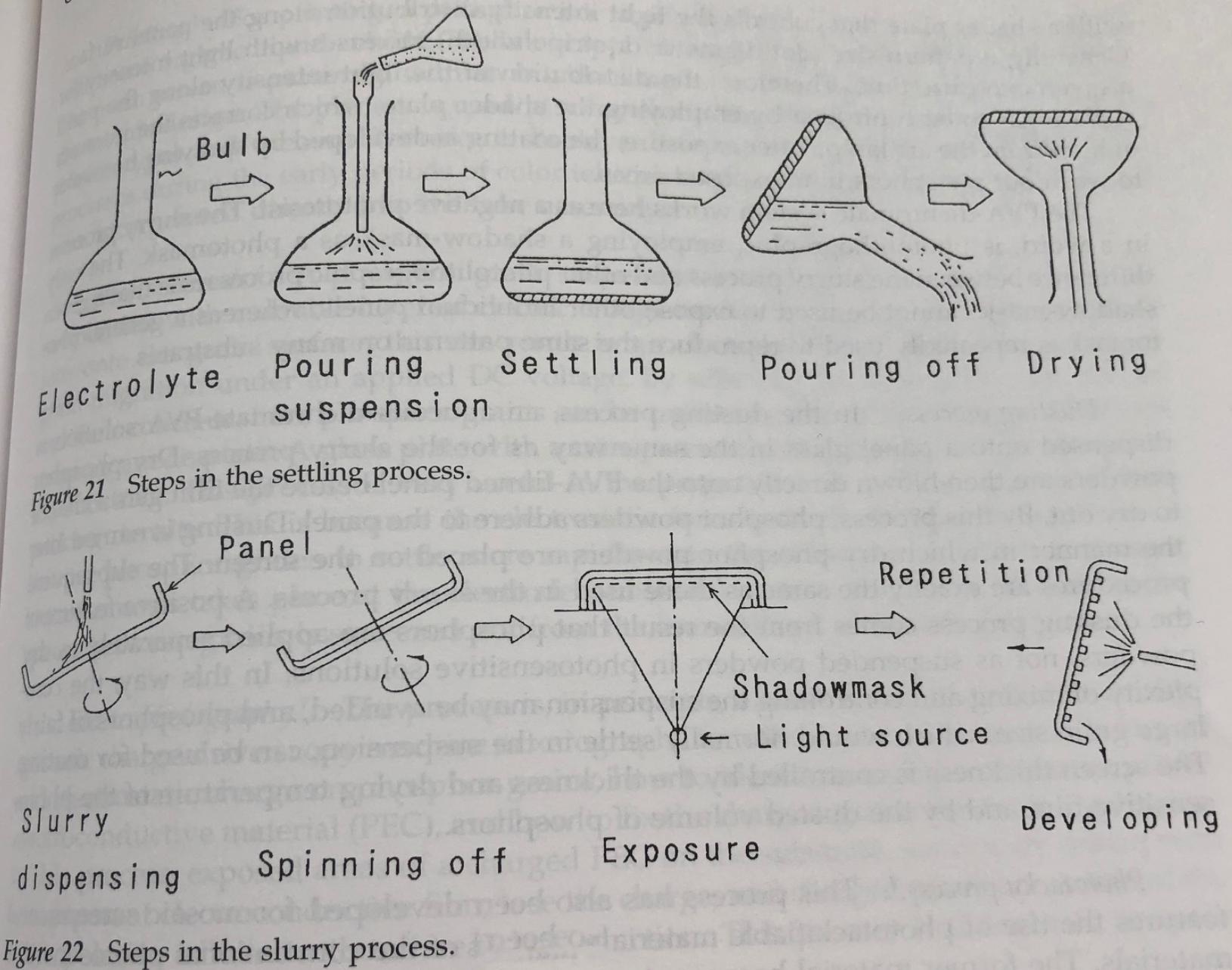 The slurry process is the typical process used for manufacturing mosaic screens. Figure 22 shows the steps in the process: A suspension is prepared by dispersing phosphor powders in an aqueous polyvinyl alcohol (PVA) solution. An aqueous dichromate solution is added to the suspension to make the mixture photosensitive. The mixture is called a slurry; hence the name of the process. A glass panel is set face-down in a spin-coating machine. The slurry is dispensed onto the panel while the glass is rotated slowly with a small tilt angle. The slurry is allowed to spread evenly on the inside surface of the panel without bubbles and using a minimal slurry volume. The panel rotation is then increased to obtain the desired screen thickness on the panel. Any excess slurry is recycled. The coating on the panel is dried with an infrared heater.

The panel is then exposed to light after an appropriate shadow mask (or an aperture grill) has been placed within the panel. The exposure system is equipped with an ultraviolet (UV) light source (mercury-arc lamp) at the site corresponding to the deflection center of the electron gun of the cathode-ray tube to be finished; the system is equipped with a lens that equalized the light beam path to that of the electron beam trajectory, and with a shader plate that controls the light intensity distribution along the panel surface. Generally, a pattern size (dot diameter or stripe width) increases with light intensity for a given exposure time. Therefore, the distribution of the light intensity along the panel surface has to be controlled by employing the shader plate, which corrects the intensity of light from the arc lamp. After exposure, the coating is developed by spraying hot water to wash out phosphors in unexposed areas.

The PVA-dichromate system works here as a negative photoresist. The slurry process, in a word, is photolithographic, employing a shadow mask as a photomask. The only difference between the slurry process and other photolithographic processes is that a given shadow-mask cannot be used to expose other individual panels, whereas a general photomask is repeatedly used to reproduce the same patterns on many substrates.

Note: Also mentioned are a Dusting Process which uses dry phosphor dust and PVA-dichromate and Phototacky process as well as several other processes. Available in the book, which is worth having on your shelf.

The shadowmask is not on the screen but a carefully controlled (small) distance behind it. Looking from the green gun through any shadowmask hole, you'll only see a green phosphor spot. As you tweak the size control the green beam moves to different spots ... all green, thanks to the shadowmask. 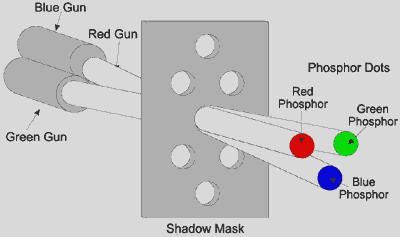 Not the answer you're looking for? Browse other questions tagged crt color or ask your own question.

5
What is the red/orange coating underneath a CRT anode suction cup, and is it important?
0
Could black-and-white CRT-based television sets be damaged by holding a magnet to the screen?
27
Why wasn't interlaced CRT scanning done back and forth?
0
What was the point of an “alignment scope” like Kikusui 5091, and can anything be done about it's dismal horizontal bandwidth?