Why are LEDs so tolerant of voltage?

My electricity knowledge is about high-school level or so. Just about enough to be dangerous...

Back when I was a kid I used to play around with 4.5V DC power sources, buttons, switches, relays and tiny 3V incandescent bulbs. Was pretty fun. But I didn't pursue this interest and instead went into computers.

Today while goofing around at the office I played a bit with a colleague's toys: a bread board, a resistor, some LEDs and a 9V DC power source. And I noticed something very odd (well, for me anyway):

It didn't matter if I put 1, 2 or 3 LEDs in series, they always shone at the same brightness. Add a 4th one though and they all became really dim. On the other hand, putting them in parallel also didn't affect them... much, but one did shine a bit brighter than the others (which was as my colleague predicted, albeit the effect was far less than he thought it would be).

This... doesn't add up to me. Incandescent bulbs were VERY sensitive to voltage. Add more and you get a brighter light but the bulb burns out sooner. Adding 9V to a 3V bulb would be shiny, but probably not for more than a few minutes. These LEDs however don't seem to care.

I always lived under the impression that most electronics components are meant to be operated at a set voltage (or at least a fairly narrow range), and going above/below that usually comes with some unpleasant side-effects, such as the smell of burnt plastic.

Now, I suppose these LEDs can't tolerate anything either - if I give them 1000V they'll probably smoke anyway - but it seems that there's a pretty wide range where they operate just the same?

How does this work? How does the current/voltage/resistance play out when putting multiple LEDs in series (and when changing the count of these LEDs)?

LEDs are a type of diode, and diodes experience non linear current increase with a voltage increase. If you apply a voltage in the wrong direction, they act as if they have incredibly high resistance, and block current. If you apply it in the forward direction, as you increase the voltage, not much current will flow until you reach a "knee" point in the current vs voltage curve, at which point the diode will start to behave as if it had very low resistance(allow much more current to flow and the LED to turn on). Until you reach the minimum forward voltage of the diode though, little or nothing happens. When you put the LEDs in series, you force the same current to flow through all of them, which causes the voltage to be roughly evenly split between them(as they are identical LEDs). When you added the fourth LED, you caused the voltage each LED receives to be lower than its minimum forward voltage, thus no current flows. I'm assuming you also got all 4 LEDs in the right direction as adding one backwards will also cause them not to light.

Note that LEDs have a negative temperature coefficient, which means as they heat up, they allow more current to flow, which heats them up, causing more current to flow, and this cycle, if not interrupted, will continue until the LED burns out. For this reason LEDs are installed using either a resistor in series to the LED(wastes power, but the positive temperature coefficient of the resistor compensates for that of the LED) or a current controlling circuit. Sometimes in handheld battery powered devices the resistance and PTC of the battery are used in lieu of a physical resistor. This is also the reason you can expect LEDs in parallel to differ a bit in brightness. If they're matched LEDs, they share current decently as long as none of them heat up. If one heats more than the others, it will draw more current than the others and heat up more yet.

It's better to think of LEDs in terms of current than voltage. Voltage is the pressure, or how hard the electrons are "pushing" and current is the rate of flow of electrons, or the quantity passing through something per unit of time. Current determines brightness of the LED, how hot it gets and how quickly it burns out. Voltage determines current, but only when you take effective resistance into account. Because the effective resistance changes with temperature, voltage is not the best term when looking at questions of brightness or time before failure.

As for why one, two or three in parallel would seem similar brightness, likely the difference was significant, just not visible to your eye. You mention "A resistor" and it's not clear if you used the resistor when performing this experiment, but three 3 point something volt LEDs in series connected to 9v will apply roughly 3V to each, which will likely keep the LEDs happy. In the long term, adding a resistor or a current controller is necessary to prevent the LEDs from overheating, running over current and burning out. 2 LEDs at 9V puts about 4.5V across each of them, which will cause them to run overcurrent and heat up(which will cause higher brightness, but not much because LEDs are less efficient as current increases and also as they heat up), go into thermal runaway and burn out. 9V across a single LED will generally burn it out fast enough to make it difficult to test. Was your friend perhaps adding a resistor to each set of LEDs in series and were they possibly different resistors?

If the 9V source is a battery, bear in mind a battery does not provide exactly its name voltage, has internal resistance and will change in performance if it heats up.

I use a "9V" battery pack with my breadboard (6 AA batteries in series) and with new batteries in it and no load connected it gives about 9.5V. If I connect a heavy load(extremely powerful COB LED) to it, even with new batteries the voltage of the pack can go as low as 6V. If you aren't reading the voltage during each experiment with a meter, you can't necessarily trust that a battery pack or voltage source is giving you exactly 9V.

The LED brightness is proportional to current. It will reach a point when it gets visually no brighter despite additional current being pushed into it. This is visual saturation: the eye cannot perceive small brightness differences at high brightness levels due to its logarithmic response, although a non-human sensor can.

LEDs also have a minimum voltage, Vf, to push current through them. So below Vf - little or no current. Above Vf - current climbs rapidly. It’s very non-linear. All diodes are like this by the way, and LEDs can have Vf ranging from 1.2V to over 3V depending on the color and type.

This non-linear behavior of LEDs is why they need current limiting in the form of a load resistor or regulator, while incandescent lamps do not.

You were using an adapter and load resistor, so you limited current that way (and didn't fry your LED.) You didn't 'crowbar' (short) your power 9V source.

Anyway, let’s say that the forward drop Vf on your LED is about 2.2V. Then what happens when the LEDs are connected, one by one:

In the 4-LED case you could reduce the resistor value, but it would be very difficult to tune it just right - there isn't enough 'overhead' voltage to work with. So instead you'd either increase the voltage a bit, or use fewer LEDs in a string.

LEDs are current controlled devices. They need minimum amount of operating voltage to function. When the input voltage is less than the forward Voltage of the LED, the LED current will no very very small. Once, the input exceeds that minium Voltage (forward voltage of the LED), the LEDs will turn on. From this point, the voltage across LED will not follow the input voltage. It is pretty much constant. Evident from a sample graph below. 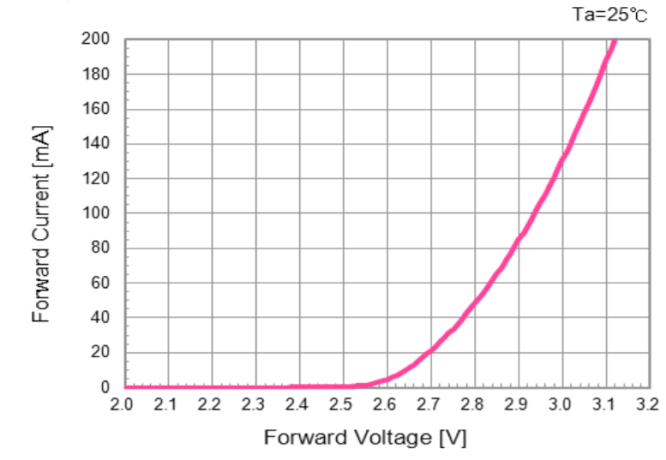 So, if you connect an LED(of forward voltage of about 3V) directly across a 9V battery, the voltage across the LED cannot increase above 3 V.. perhaps it would be near 3.2 or 3.3 due to excessive stress.

Out if applied 9V, only 3V is across the LED the remaining voltage has to be dropped across the wires you are using and the internal resistance of the 9V battery itself. So, the current will be higher. Very much higher than the LED specification (20 mA for general purpose LEDs). let's assume we have 10 ohms if internal resistance and wires' resistance added..

This is 30 times higher than the rated current. The LEDs temperature rise to such an extent that the internal structure starts to fail. In your case, the LED could go puff with a magic smoke.. or it would heat up and become dull over period of time. The battery also heats up due to high power dissipation.

Let's say, If the forward Voltage of Diode is 2.5 V and you are connecting three such LEDs in series, they all will lit because they all can still get the needed forward voltage of 2.5 V Minimum. But when you bring a fourth one into picture, you no longer can provide minimum forward voltage drop of 2.5V. hence, none will lit.

When you connect the LEDs in parallel, it is same as the initial case and all will lit but they won't be happy. They will be under stress due to higher current will eventually fail, burn, or pale away badly and permanently.

The LEDs are current controlled. We need to control the current. The normal ways are.

Just an example to show that the LED brightness are specified with respect to current. 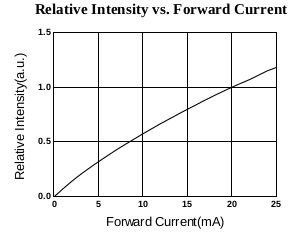 Not the answer you're looking for? Browse other questions tagged led basic or ask your own question.