Modification to the D flip-flop

When we take a clock and a signal, the D flip flop output always gives "clock edge" AND, and the state will be high unto to the next clock cycle. 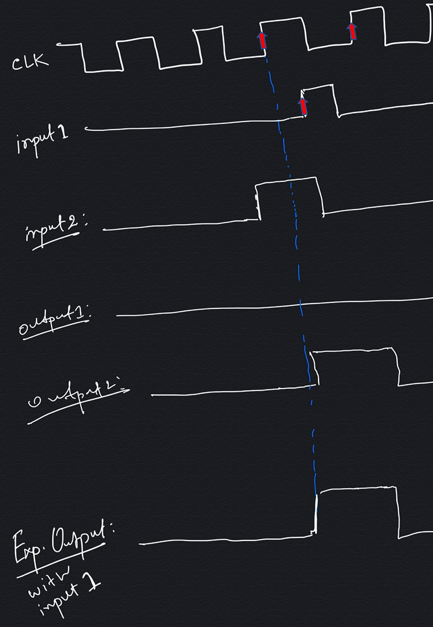 Now I want my output like like a latch, but timing will be determined by the corresponding clock signal.

If we think about the case 1 (input 1 = D), we do not get any higher state because the clock is not on. But latches gives output (case 2 when D = input2) in this case when both state is high, i mean the clock and input. But the problem is that latches don't give the clock leading edge time.

Is there any way I can get the state high from the corresponding clock leading edges all the time, while it works like a latch? Like the last output that I have added in the diagram.

D flip-flop is used for synchronizing input with clock. The complementary Q and Q# outputs are determined by the input value "at" the clock edge. The input must be stable during a specified time interval around the clock edge (setup and hold time). The input value is irrelevant except during the sampling interval, defined by setup and hold time. So in your figure, the pulse on the input1 trace is briefly high during the falling edge of CLK, but it is low during every rising edge of CLK. So output1 (Q1) is therefore always 0. The input2 trace has a pulse that is 1 during the rising CLK edge that is highlighted, so output2 (Q2) is 1 for one clock cycle. Effectively the D flip-flop behaves like a 1-cycle delay element, synchronizing an input signal into the CLK timing domain.

We say that the D flip-flop input is "sampled on the rising edge of CLK", meaning that relative to the moment when the CLK signal rapidly changes from logic low to logic high, for a "setup time" duration before that event, and continuing through a "hold time" after the rising edge, the D input must remain at a valid, constant logic level. Whichever logic level D is in, determines the Q/Q# output logic level for the subsequent clock cycle.

Depending on how the circuit is realized, it may be possible to select a falling-edge triggered D flip-flop, or else an inverted CLK can be used. Setup and hold time interval would be relative to the falling edge of the clock instead of the rising edge.

That is exactly what a D flipflop does. Don't confuse it with the action of a "transparent latch", which is not the same thing. With a simple D ff, the output does not change with activity on the D input. It changes only with the correct direction clock edge, and then only if the D input is different from the Q output. The output is latched to the current state of the D input at the moment of the clock edge.

1
Does the output of JK Flip Flop toggle continously?
27
What is a flip flop?
1
Flip-Flop Made with 74xx Chips not Latching Consistently
0
SR latch and SR flip flop difference
0
Which is better latches or flip flop
0
Why is the SR Flip flop edge enabled
1
Confusion about when a JK flip flop is triggered
9
Analysis of two D flip-flop designs based on D latches
0
Difference between latches and flip flops in datasheet