Effect of Source and Load Resistances on a Filter

suppose I want to design a low pass filter (for instance a Chebyshev filter) by using the low pass prototype method: 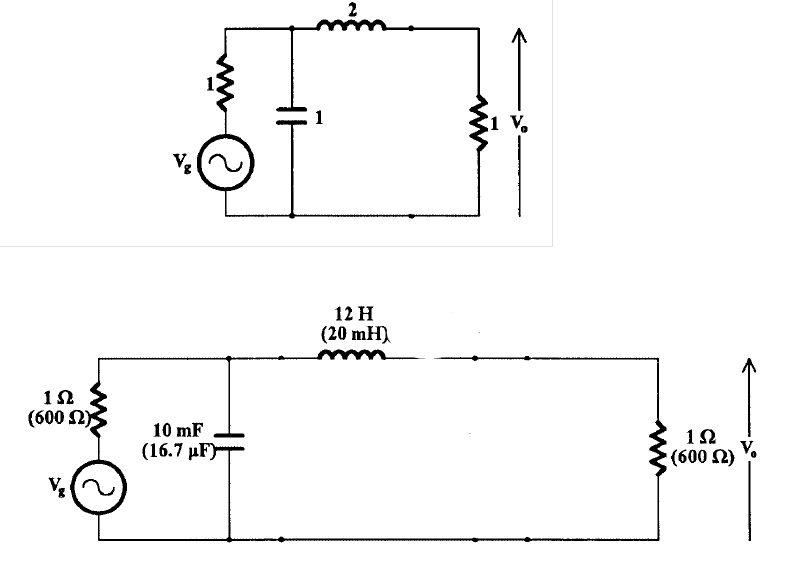 The upper circuit is the Low pass prototype filter, while the lower one is the real filter (which is obtained from the first one by using a frequency and impedance de-normalization).

As you can see, the "effect" of a filter on the input signal does not depend only on the filter (i.e. on its transfer function) but also on the source output resistance and on the load.

Now suppose I want to realize the same transfer function with an active filter, such as the Sallen - Key Low Pass filter:

As you can see in Wikipedia page, there are the following design equations which can be used to realize a second order low pass transfer function by choosing w0 and Q.

So, it seems to me that if we design a filter transfer function with the second method, it will be ok for any source output resistance and for any load. It seems quite strange to me and it seems in contrast with the fact that the filter realized with the first method depends on them.

Maybe the dependence on the source and load resistances is hidden and I do not see it.

For a passive LC filter, the source and load resistors are part of the design equations. Basically you need some energy absorption that the Ls and Cs don't provide. You can design an LC filter to work with a short circuit or an open circuit on one port if you want, but not both. This can be handy if you want an LC filter driven from a voltage or current source, or to drive an open circuit like a piezo or Kerr cell.

An active filter like the Sallen Key you've drawn must have a zero ohm source impedance, but can tolerate any load impedance that the opamp can drive. Any source impedance appears in series with R1, so changes the response of the filter.

So, it seems to me that if we design a filter transfer function with the second method, it will be ok for any source output resistance and for any load.

No, it will be susceptible to input voltage source impedance. If that impedance were resistive (for example) you could imagine it adding to the value of resistor R1. This will lower the Q (quality factor) of the circuit and raise the cut-off frequency.

However, because an active device is used, there will be little influence on the filter performance and shape if an output load is connected. Clearly, op-amps can only provide drive levels up to a few tens of mA so the load added should not cause that level of current to flow.

Being more practical and understanding that a lot of op-amps may reduce their open-loop gain with a falling load impedance value, this also has to be taken into account on how that may subtly reshape the filter characteristic.

Not the answer you're looking for? Browse other questions tagged integrated-circuit circuit-design filter active-filter passive-filter or ask your own question.