I can't understand the function of this diode

On a past project, I've used the LM2576 buck converter with success. However, I've never understood how the catch diode works (D1 on the diagram).

The datasheet explains the importance of the diode, and why it has to be a Schottky. TI LM2576 Datasheet

My doubt is around the workings of this diode on the example circuit. Being a DC output, when the IC is shut down, the inductor will release charge flowing in all directions. IC output will prevent sinking that current, so it must take the load way. Is the voltage drop of the diode what is important here, maintaining the orientation of current? Does this means that current will flow to the load, after shutdown, and return via GND multiple times, using that voltage drop to slowly drop to zero? Does this solution prevent damage to the load, or the voltage source?

Thanks in advance for your time. 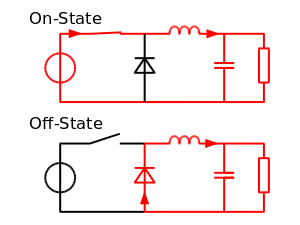 Inductors don't like you to change the current suddenly. When you try large voltages are induced.

Being a DC output, when the IC is shut down,

The IC isn't shutting down. It's just turning off its output.

... the inductor will release charge flowing in all directions.

Not really. It will flow in the same direction as when the converter output was on.

Yes, the output is switched off so no current flows back into the converter.

Is the voltage drop of the diode what is important here, ...

The voltage drop of the diode is important to keep the efficiency high.

... maintaining the orientation of current?

The orientation of the diode ensures that current flows in the correct direction.

Does this means that current will flow to the load, after shutdown, and return via GND multiple times, using that voltage drop to slowly drop to zero?

Does this solution prevent damage to the load, or the voltage source?

A successful design has to do both. The voltage is usually the critical parameter for most electrical loads. The maximum current may be a critical factor for the power supply feeding the converter.

D1 is not best described as a 'catch' diode. That's a better description of the diode across a relay coil, which 'catches' the high voltage transient when its driver turns off.

In a buck converter, best to call it a 'freewheel' diode.

During the on phase of the IC, the output is taken up to the input voltage. Current flows from left to right in L1, increasing as L1 sees the excess of the input voltage over the load voltage across it.

When the IC switches off, the output pin goes high impedance. Current is still flowing from left to right through L1, but it can't be sourced from the output pin. For a very brief time, L1's current is sourced by the stray capacitance of the output pin and D1, and the voltage there falls rapidly. Eventually, the voltage drops to -0.4v, and D1 starts to conduct, sourcing L1's current. This allows the current to continue flowing (it freewheels) through L1 to the load, although the current is now falling as L1 sees the load voltage plus the D1 voltage drop across it.

It is a switch mode regulator. It first turns on to allow current to flow into the coil, and when it turns off, current must keep flowing to output to release the energy to output, so the diode allows it. The less voltage drop over diode, the more efficient the buck converter is.

Not the answer you're looking for?Browse other questions tagged diodes dc-dc-converter or ask your own question.

7
Is a Schottky diode appropriate for reverse polarity protection?
0
Choosing Diodes for 3-Phase Rectifier
0
How to identify semiconductor parameters for spice model?
0
Are my calculations for flyback diode/s corret?
1
If I connect a schottky-diode to the DC converter output, why doesn't sense the voltage?
0
Is the Diode RMS Reverse Voltage spec important in a DC circuit?
1
DC/DC step-down regulator destruction because of inductive load?
1
Protective diode across dump load
4
Diode OR 4 batteries
0
What the purpose of a diode in parallel with a power switch