How to determine brushless DC (BLDC) winding pattern, based on poles and slots?

I am trying to figure out how to determine the correct winding pattern for a 3-phase BLDC motor, given that there are 10 poles and 18 slots. I have seen the very interesting post here., but as the 10-pole 18-slot pattern has not been confirmed, I am wondering how these patterns were devised in the first place.

An updated version of that chart can be found at www.bavaria-direct.co.za. Here it is:- 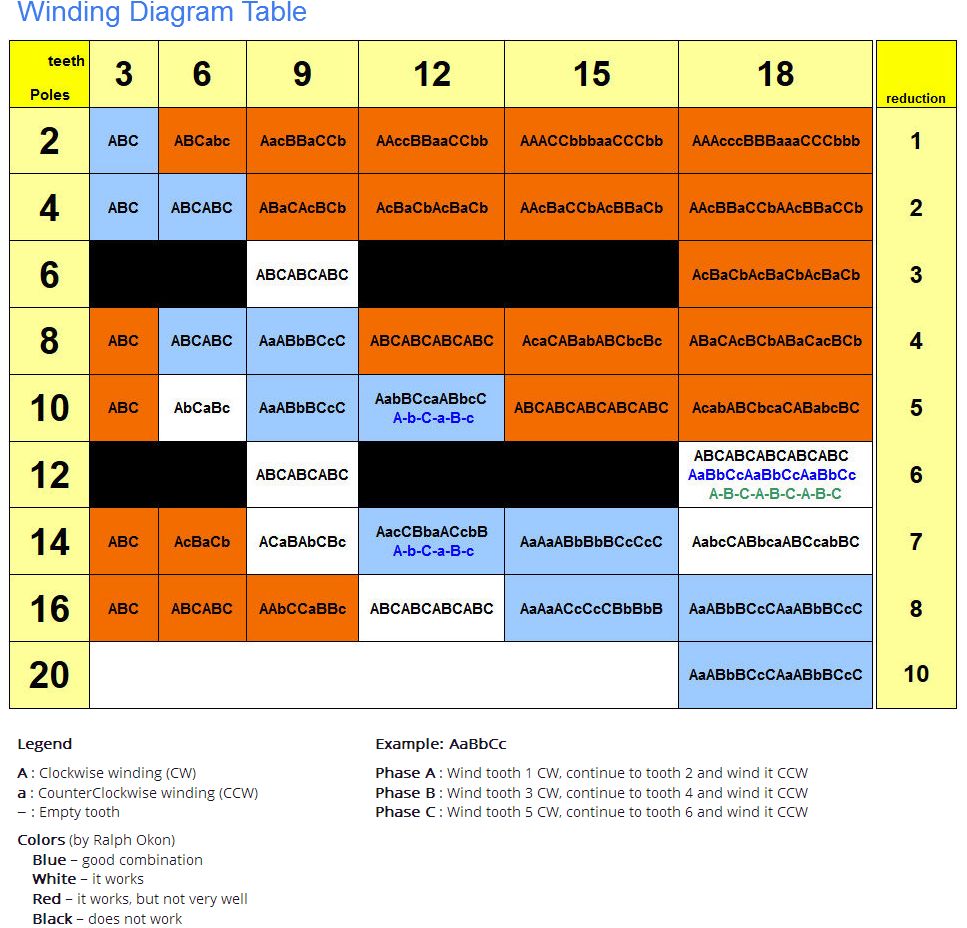 Based on the legend Colors (by Relph Okon) I am guessing they have been confirmed. It was probably compiled from the results of experimental winds done by several people.

However many combinations can be calculated by multiplying the patterns of those with fewer poles (eg. 4 poles and 6 teeth has the same pattern as 2 poles and 3 teeth), or applying some basic rules.

The essential rules are that the number of poles must be even and the number of teeth must be divisible by 3. Secondary rule is they must not be equal (eg. 6P-6T) or an exact multiple of same (6P-12T). Best combinations seem to be where they are as close to the same as possible within those rules (eg. 2P-3T, 10P-12T, 14P-15T).

0
BLDC Current Driver Encountering Current Problems
2
What decides the position of Hall Sensor in BLDC motor
3
BLDC's number of positions
0
BLDC motor control hall effect invalid
0
Why does my in-wheel BLDC motor have sinusoidal back emf (line to line) when rotated by external system?
1
BLDC sensors placement
1
BLDC Motor - Reason for different number of pole pairs on rotor / stator
0
Trying to determine the internal construction of a BLDC Motor
1
Where to find winding diagram for a 56 pole 63 slot BLDC motor?