A basic description of capacitors - but is it wrong?

I volunteer at a club to teach teens Arduino and basic electronics: LEDs, resistors, voltage, current, etc. I also describe what they do:

Batteries, chargers and other power supplies:

LEDs get "excited" when electrons pass through them, and they glow when there are enough:

Resistors don't let all the electrons through at once - the higher their value, the fewer electrons they let pass:

But when I get to capacitors, I've never found a convincing explanation - and the Wikipedia Capacitor "Hydraulic analogy" just makes me cringe: it hand-waves a lot of the effects.

So I describe it thusly:

A capacitor is two large plates of thin metal, separated by a very thin layer of "stuff" (called a dielectric) that doesn't let electrons through. They can be manufactured by rolling that triple "sandwich" into a tight cylinder or other compact form (with suitable insulation); they still work the same. The larger the plates involved or the closer the two plates are to each other, the higher rating the capacitor has. Of course, the dielectric has limitations: for example, too high a voltage between the plates will burn straight through the dielectric. This will "short" the two plates together into a very low value resistance: explosion!

If you put a capacitor across a battery, interesting things happen. Think about when the capacitor was manufactured: both plates of metal have (about) the same number of electrons in each of them. When you put the combination across a battery, then one side gets extra electrons supplied. Those electrons can't pass through the thin dielectric; but since they're so close, they actually electrically "repel" the other plate's electrons, forcing them out the other side of the capacitor. As more electrons go in one side, more are repelled and forced out the other. Note none are passing through the capacitor: the ones leaving just don't want to be there anymore!

However that effect is limited. Pretty soon the second side starts to run out of electrons to repel - the ones still there are bound too strongly to their atoms to be so easily pushed out - and the 'apparent' current leaving the capacitor dwindles to nothing. The capacitor is considered "saturated", or fully charged. The electrons in the over-supply side still kind of want to stick around: they're still being pushed by the incoming voltage, and are even attracted to the positive charge of the opposite side that they helped to create! If the voltage reduces though, then some electrons will come back out: the capacitor is discharging.

If you disconnect the capacitor from the battery completely, each side still holds an unequal number of electrons. In fact, if you were to touch both ends you'd provide a path that would allow all of the excess electrons on one side to immediately make up the deficiency of electrons on the other - and there'd be nothing other than your inate resistance to limit the passage of those electrons! In other words, if the resistance was low enough, there'd be an explosion - in YOU! (Ouch!) Note that since there's no passage of electrons through the capacitor - they're all there just waiting to move - it can discharge extraordinarily quickly.

So, given that a capacitor can store excess electrons but also release them quickly, that means that they're good at "smoothing" peaks and troughs in either voltage or current - until it saturates or runs out of charge.

So, I fully agree that the above does not follow the standard description of capacitors. But that's not the question - is the above wrong?

I suggest you start using water analogies for describing the working principles of electric components. In my experience, water analogies are best for understanding electricity. Here's a very good analogy for DC electric circuit with capacitor. 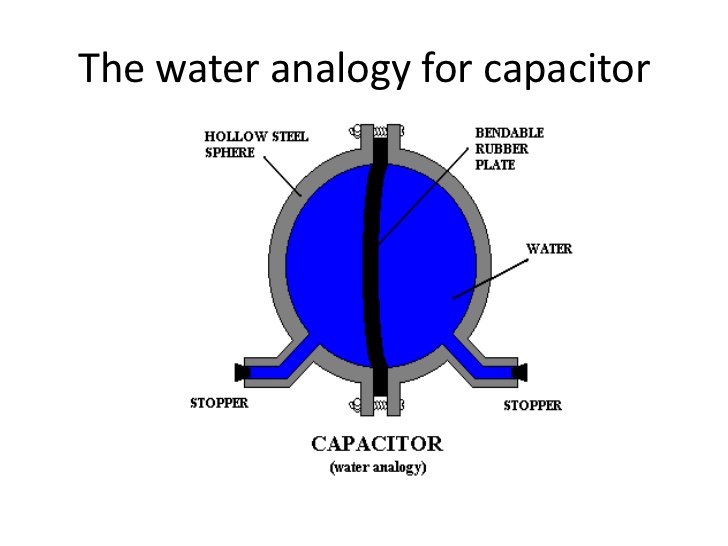 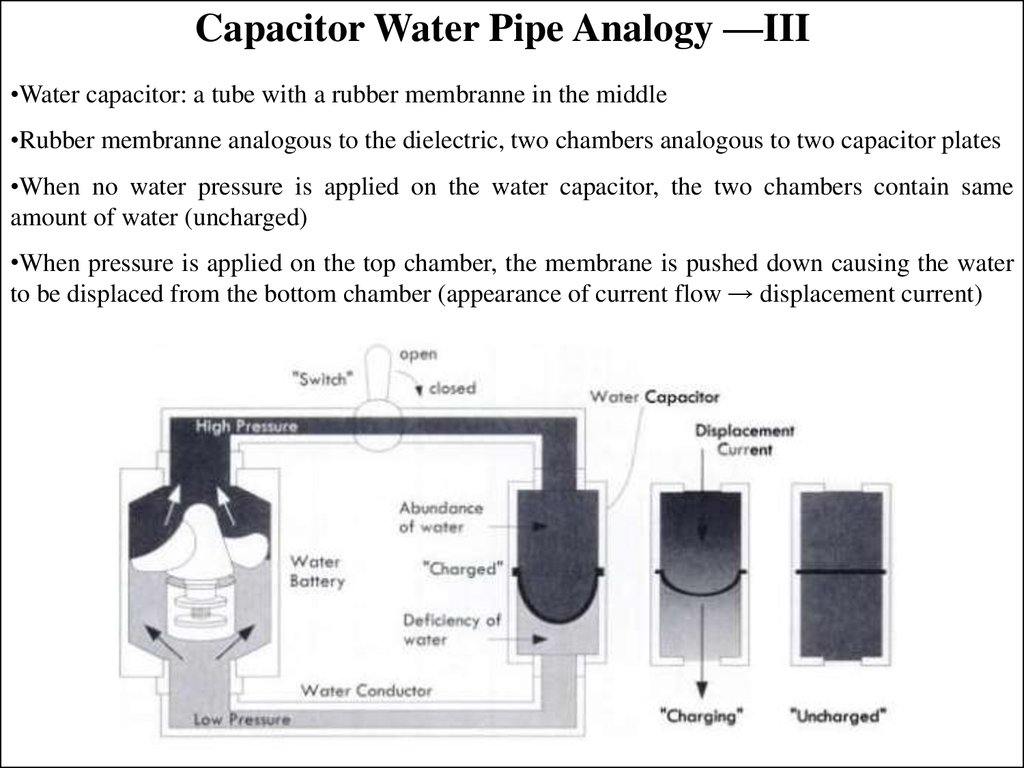 Not the answer you're looking for? Browse other questions tagged capacitor teaching or ask your own question.

87
Where does electricity go after being used?
14
LEDs no longer bang - or whimper!

2
Capacitors in series?
0
How do capacitors maintain their charge?
0
Input capacitor of an amplifier
0
Electrons inside an LC Circuit
3
Why don't capacitors have a minimum voltage rating?