With respect to the below discussion, consider that we are talking about Continuous LTI systems characterized by constant coefficient ODEs.

"Recovering" the defining differential equation from this transfer function yields

where \$P(D)\$ is unknown but irrelevant for the purposes of this discussion. What are the characteristic modes of the system?

Is it acceptable to simply say that the natural response \$y_n\$ is given as below?

It would seem to me that the answer is no. Why can we recover an ODE from a transfer function in general? For instance, what if the cascaded system had've had \$(s-2)\$ factors rather than \$(s+2)\$ factors that cancelled (ie. one of the subsystems had a pole at \$s=2\$). In such a case, would it not be wildly incorrect to recover the ODE above since then we are ignoring an internal characteristic mode that blows up \$(e^{2t})\$?

If the procedure of recovering an ODE from a transfer function doesn't work in this blow-up case, can it work for the (s+2) case, or in general? I think not, but am looking for some guidance.

If the poles and zeros are cancelled then the analysis will be oblivious to the internal unstable modes.

To illustrate, I am going to use the system with the unstable pole at 2 that gets cancelled. A good set of differential equations to use is any state-space realization. 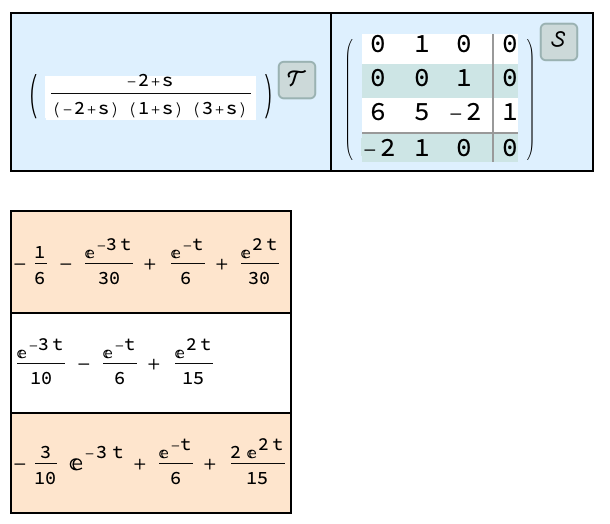 This same analysis is readily obvious in a Jordan state-space realization of the system. Now the unstable mode appears only in the third state, and the third state simply does not appear in the output. 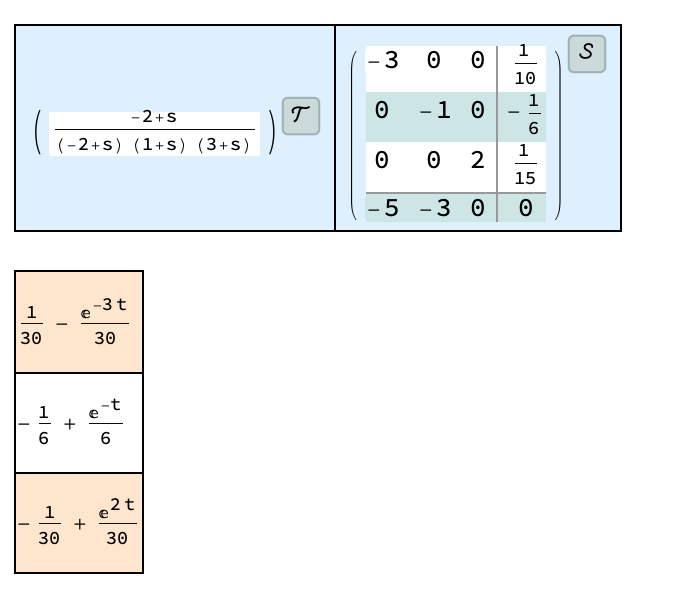 To do a complete analysis the poles and zeros should not be cancelled. They are prone to get canceled when we use transfer functions. This does not happen with a state-space realization unless it is explicitly done.

Both the state-space realization I used above give the same characteristic polynomial. I can get the minimal polynomial explicitly. 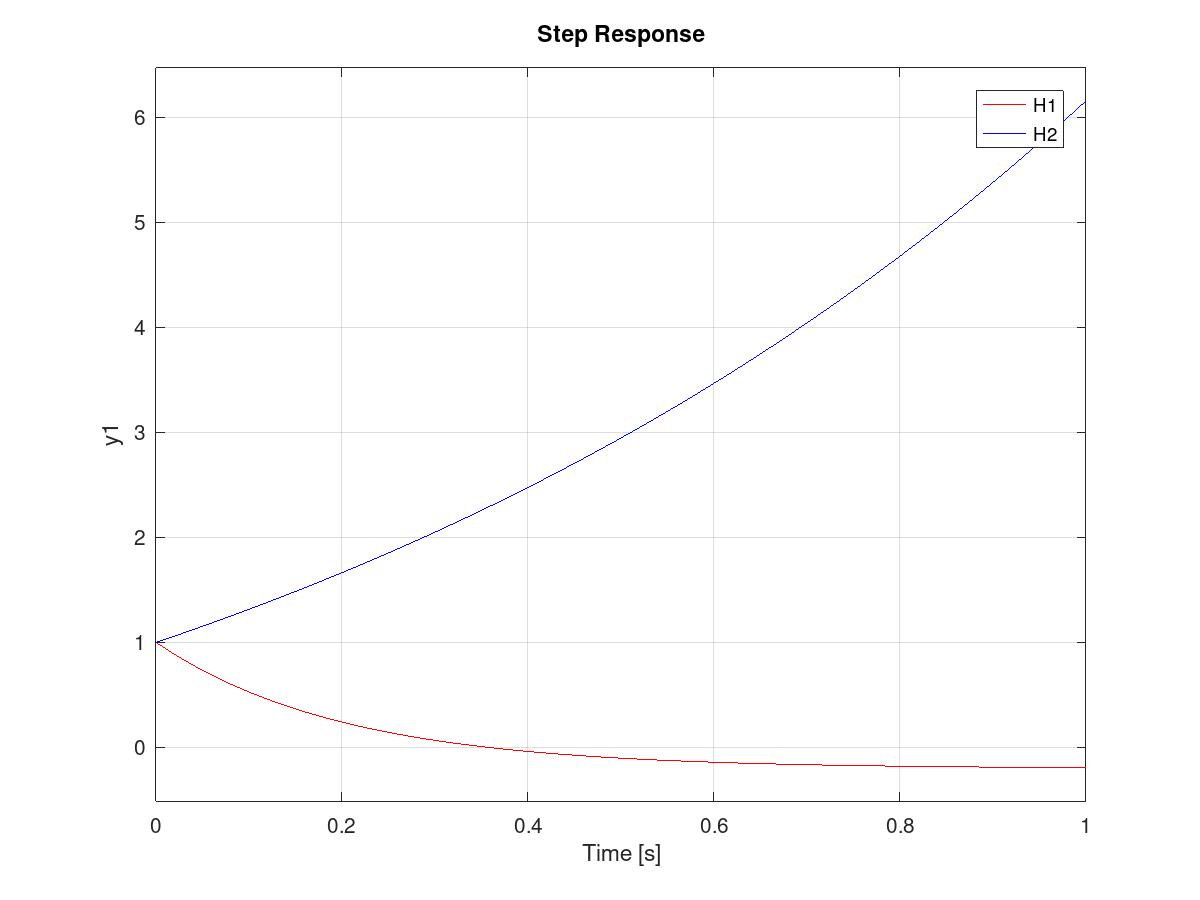 Yet, when we connect them in series the response from the resulting \$H_1(s)H_2(s)\$ is 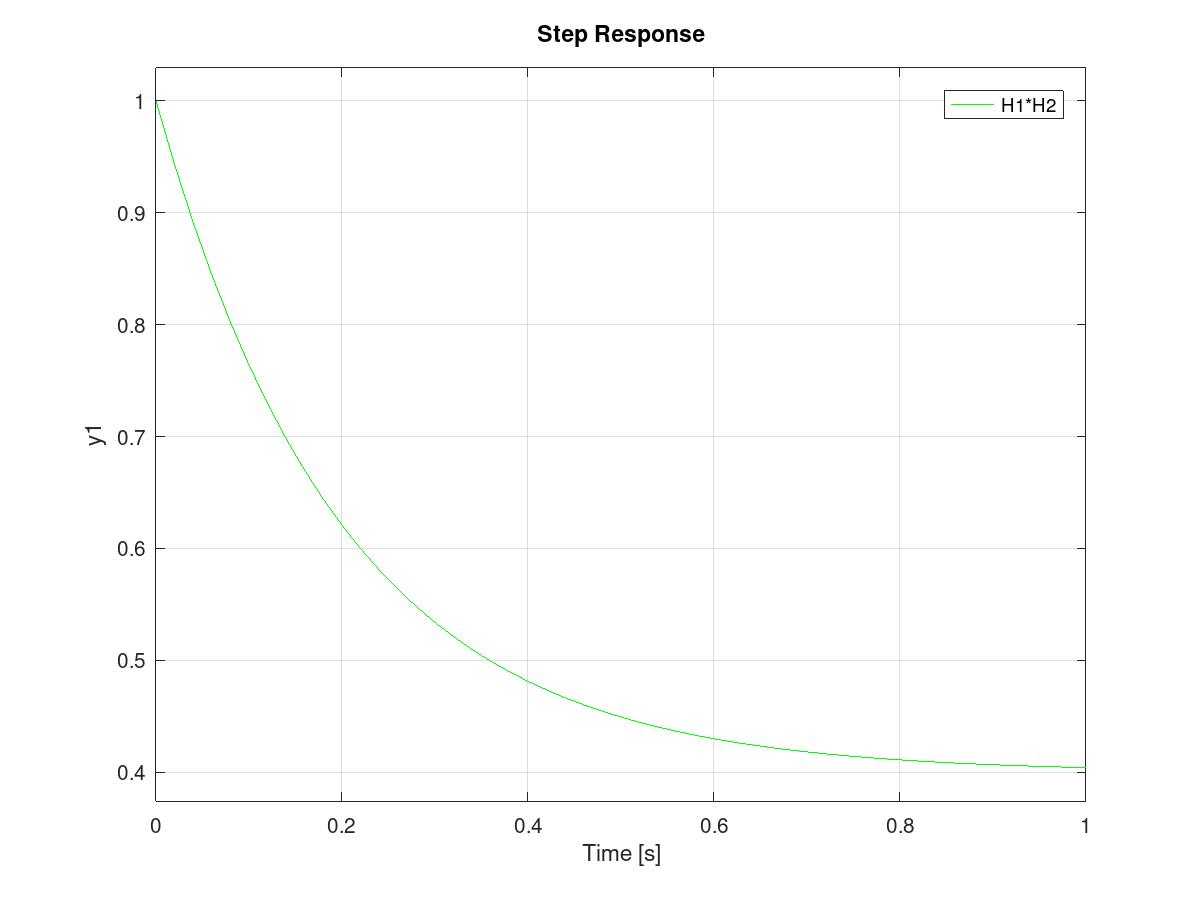 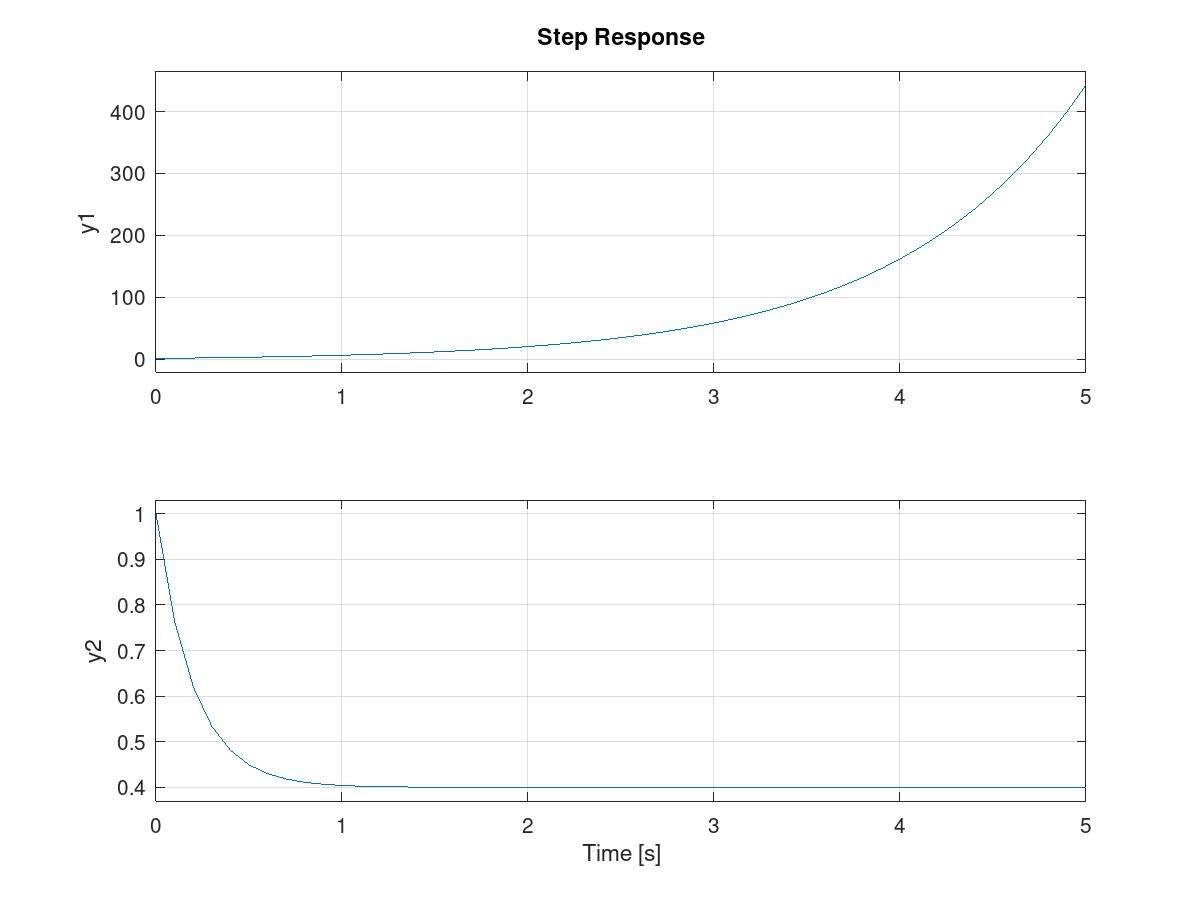 although the final output gives us a stable, decaying, output the intermediate one is unstable and "blows up". So your intuition is kind of correct to point that there is something odd with the unstable pole cancelling, since you wouldn't be able to exactly place a zero on top of a pole. Yet, there is nothing wrong with it mathematically, we can see that the second transfer function has the output $$ y_2(t) = A e^{t}$$

Is it acceptable to simply say that the natural response yn is given as below?

if you have those two ODEs in "series" and with initial conditions zero, yes.

In such a case, would it not be wildly incorrect to recover the ODE above since then we are ignoring an internal characteristic mode that blows up (\$e^2t\$)?

No, it will work out ok mathematically as long as you have initial conditions zero. But in practice (thinking about real systems that were cascaded) it would be a disaster, since you would only have canceled the "observability" of the unstable mode.

If the procedure of recovering an ODE from a transfer function doesn't work in this blow-up case, can it work for the (s+2) case, or in general? I think not, but am looking for some guidance.

It works, but just as the case where you have a function $$ f(x) = \frac{x(x-2)}{x-2} \neq x$$ you have to be very careful when dealing with cancellations, and point that $$ f(x) = x, \, \text{ for } x \neq 2.$$ So what you get from the reverse Laplace of a transfer function only relates the very first input and the very last output of a series of systems, with the condition that you are disregarding initial conditions of the system (and its subsystems).

Obviously you won't recover/notice any of the pole cancellations, but that does not make the ODE you got wrong, if you start from the ODE + zero initial response you do get the transfer function with the pole-zero cancelling.

Your argument is fundamentally flawed. There is no factor in your transfer functions that gives rise to \$e^{2t}\$, there is no blow-up, whatever that is.You cannot inverse transform the individual Laplace poles and zeros and then multiply or divide them in the time domain - multiplication in the Laplace domain is convolution in the time domain. This is why we must express the transfer function in partial fractions - to decouple the factors

Not the answer you're looking for? Browse other questions tagged transfer-function laplace-transform or ask your own question.