Can envelope decay time be calculated based on this circuit diagram excerpts?

I hope it is okay for you that I as a person not involved with electric engineering ask a question here.

I do not intend to work on an actual circuit but I try to synthesize a sound sample that is coming from an old analog drum machine in audio software.

It was easy to recreate the basic waveforms of the VCOs but I have difficulties analysing the amplifier envelopes these waveforms run through. I seem to not get it by observing the waveform of my sample.

Can you please tell me from looking at the attached images what decay time each of the envelopes has or show me a formula to calculate it?

When the diode is reverse biased it is just a simple RC circuit. This should help you.

The posted snippet lacks the discharge path which is ruling the decay law.

A few extra parts need to be included for a meaningful analisys. 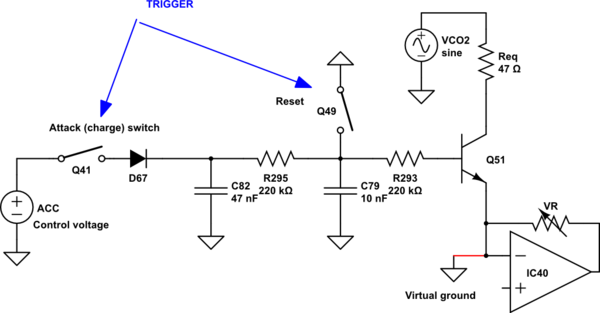 On the lefthand side we have ACC control voltage that is gated by TRIGGER signal via Q41 switch and D67 and, in first approximation, feeds a step voltage to the RC pulse forming network.

Conversely, on the righthand side we have Q51 which is acting as a "variable resitance" and hence controlling VCO2 to IC40 output gain. Current through R293 is what controls this gain, its control law is indeed a bad smelling kettle of fish, it is far from linear and strongly temperature dependant, but that's another story I am not going to go through now.

Q51 emitter is however stuck to ground potential for IC40 negative feedback and this helps calculating the RC pulse shaping waveforms.

Reset switch Q49 is driven together with attack switch kills the output while TRIGGER output is high.

So, after trimming down the circuit, we can first study the case when TRIGGER is asserted in the assumption that diodes and transistors voltage drops are negligible w.r.t. signals involved.

This is really plain sailing, we right away notice that the only effetcs are that output control current Ib is kept to zero while C82 is charged to the V(ACC) voltage.

It's now time to see what happens when TRIGGER is released, it all boils down to this circuit in the initial conditons v1(0+)=V(ACC) and v2(0+)=0.

It's a simple second order RC with non-null initial conditions, it can be easily studied with a couple of ODEs or simulated. This is simulation output with V(ACC)=1V

On the other hand analitycal study could tell us much more. Low entropy results can guide us in designing and tuning the circuit, in this case with a few approxmitaions we can say that we have:

Base current is obviously just one Ohm's law away while, as already outlined above, reckoning the gain law could be for a second question here on EESE

Not the answer you're looking for? Browse other questions tagged amplifier analog or ask your own question.

1
How can I calculate time constant and charge time of RRC circuit?
0
Switch on time limiter for a solenoid - will this circuit work?
5
I found this analog circuit at a surplus electronics part store. Based on circuit design, does anyone know what it might be?
0
Can I drive a BLDC driver with this diagram?
1
(PSPICE) Memristor-Based IF Neuron Circuit: What is this NMOS?
1
How can I modify this circuit to pickup radio waves better
0
How can I calculate V1 and V2 in this circuit?
1
2-time constant (On + decay) timer circuit
0
Can anyone pls troubleshoot this circuit?