Controlling a shaded pole fan via light dimmer switch? Which among these two fans are better for cooling?

I'm building a DIY lab round flask heater using a fiber glass 250mL GLAS-COL M102, 180 Watts heater mantle. The temperature will be controlled via a PID controller and a K-type thermocouple. Since the metal outer shield of the heater also gets hot during the operation and the PID controller will also be placed inside the housing I need to remove the heat from the inside. I have two types of axial cooling fans in my possession (picture shown in attachment). Now, the No. 1 type fan is quite powerful, noisy and the air has a lot of force to it. But you can feel the air flow pressure only unto 2-3 ft from the fan. The No.2 fan though not very loud or powerful, the air flow can be felt even up to 5-6ft away though the force from the air is not quite high like the former. I want to use a 115VAC fan to avoid using another circuit if I were to go with a 12VDC fan.

I'm assuming these are shaded pole motor fans. Can the speed of these fans be controlled via a simple light dimmer or the need a specific motor speed controller (maybe a triac controller)? Also if I used a light dimmer and wanted a slower speed to reduce noise, will the motor stall after a certain point and cause it to overheat? 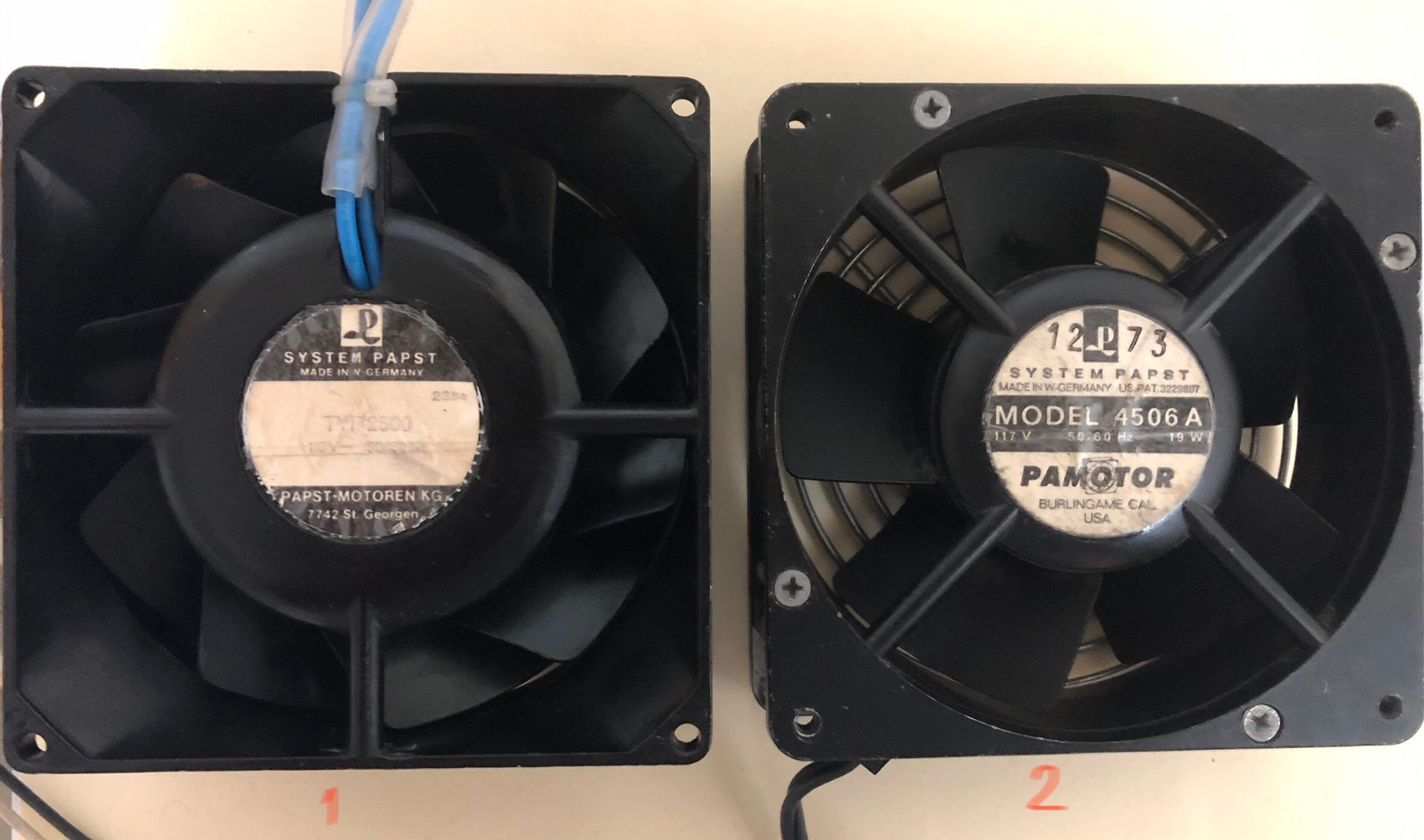 Can the speed of these fans be controlled via a simple light dimmer or the need a specific motor speed controller (maybe a triac controller)? Also if I used a light dimmer and wanted a slower speed to reduce noise, will the motor stall after a certain point and cause it to overheat?

The controller waveform and voltage reduction will tend to cause additional heating in the motor. However the nature of a fan load is such that the power to the motor will be reduced by reducing the speed. That will tend to offset the effect of the waveform and voltage reduction. However the fan's air flow helps to cool the motor. Since reducing the speed reduces the air flow, that is another factor that would tend to make the motor get too hot. You should run the motor for an hour or so directly connected to AC power and see what the normal operating temperature is. Then try the speed controller and see what the temperature is with that.

At some point in speed reduction, the motor speed might not stay at a steady speed. It may slow down drastically or stop with just a little further reduction in voltage. That greatly increases the risk of the motor overheating.

This setup will not conform to UL standards unless you can find fan manufacturer literature and speed controller literature that says the two products are listed by UL or some other nationally recognized testing laboratory as suitable to be used as you will be using them. The same is true of your flask heating setup. You will need to evaluate the risk and decide what you want to do. It is probably not a good idea to turn your back on the setup until you have watched it for quit a while. It may not be a good idea to ever leave it unattended.

Not the answer you're looking for? Browse other questions tagged motor-controller fan cooling or ask your own question.

21
How do ceiling fan controllers work?
3
How to control a blower using the analog output from a PID controller?
0
Controlling a single phase AC fan with a 0-10V DC input
0
Questions about a relay controlled AC fan setup
1
Need advices on an AC fan control circuit
1
Can I run a 12v fan off of a 9v power supply for LED lights and are there any side effects
0
Controlling a PSC motor with a triac thermostat
2
how does ceiling fan remote implement reverse function?
5
How is air conditioner room unit fan motor controlled?
2
Controlling speed of PSC induction motor (Questions about operating at high slip)