a) Find the duty cycle

b) How long time is diode conducting?

c) How long time is the inductor without current?

The converter is ideal (lossless). Capacitor and inductor are big enough so no ripple is conceived. I have deduced the following:

And it is known that the slope of the inductor current is:

I have tried to take the solve the equation for the inductor currents at each state:

But it does not seem right (it is a multiple-choice test and I am worried that I have missed a key point).

The problem might be your inductor value of 22 μH

Back to (some) basics 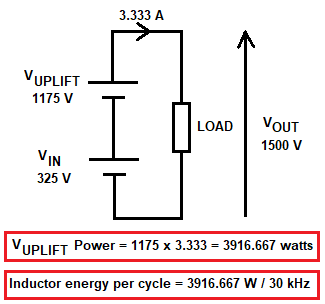 But we also know this: -

So, given that we know that the current ramps up linearly we can say: -

Re-arranging the inductance formula above gives us: -

And the peak current would become 108.9 amps. This peak current is also the current that falls to zero during the energy transfer into the output capacitor.

This is the time that the diode is conducting for, 2.039 μs.

You wrote that no ripple is needed to take into the account. Then you simply calculate how long it takes until the loaded current of your inductor is diminished to zero when the voltage over the inductor is Vout-Vin.

If your loaded current in the inductor is Ix then the needed time is Ix/((Vout-Vin)/L). You have actually tried this but got stucked with your solver machine. At least Vin-Vout is different thing than Vout-Vin. Windows's calculator can be a better choice but try to swap the terms at first.

Things become complex if you take into the account the following factors:

This is still an ideal case, but needs the differential equation or numerical simulation.

Not the answer you're looking for? Browse other questions tagged current inductor boost converter or ask your own question.

4
What dc-dc topology to use for a 300W step-up converter?
5
Winding my own inductor-resistance
1
DC-DC SPMS Boost Converter DCM Prevention
0
Boosting voltage from a current source
0
How can I calculate transfer function of Boost converter considering all resistances?
2
How to solve a boost circuit (or any switched RLC circuit) in time domain?
0
LT8330 Boost Converter burst mode
0
Boost Converter - How the diode keeps conducting?