I'm trying to find the part numbers for FETs used in a 4in1 quadcopter ESC.

The firmware variant ("O") points towards a pair of P- and NFETs for each phase, but that's not 100% sure. 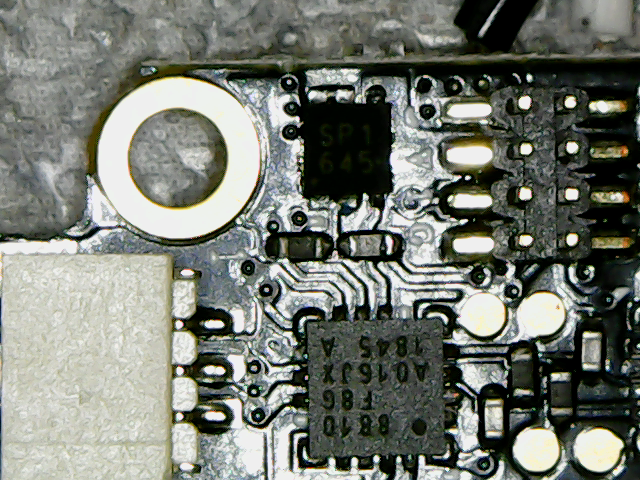 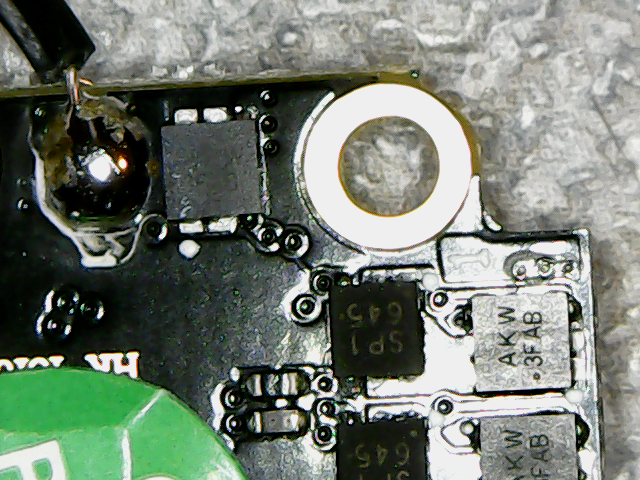 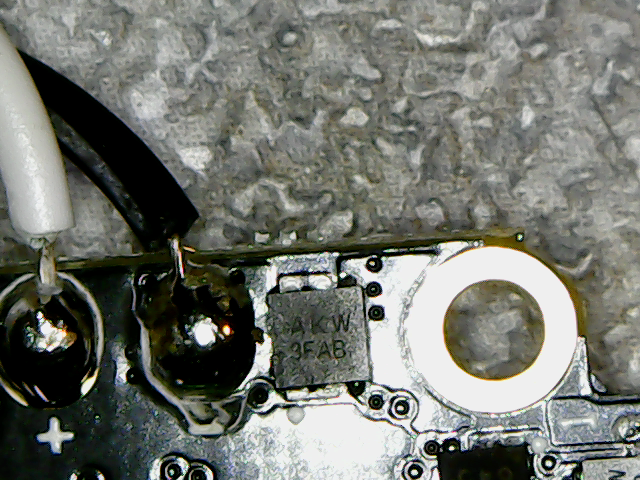 Doubts have come up regarding the max voltage rating, because the MCU might not be able to pull a PFET's gate high enough to fully switch it off. FETs were reported to blow up when a 2S LiPo is connected. This seems plausible because there is no additional circuitry present to drive the high side FET's gate, unless the chips aren't ordinary FETs.

I was able to trace some signals and here are my findings.

The chip labeled "AKW 3FAB" in the third picture, next to the black lead has direct connections to 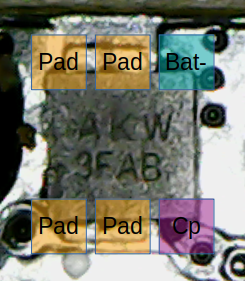 The EFM8BB1 is directly powered from Bat+. The absolute maximum for this chip is 4.2 V, which is pretty much exactly a fully charged LiPo. The SOT-23-6 part is apparently a boost regulator because

The connections found so far support the impression that this ESC can't handle anything above 4.2 V. The FETs might be able to, but the whole ESC can't.

... The EFM8BB1 is directly powered from Bat+. The absolute maximum for this chip is 4.2 V

As I suspected, the 'as advertised' information is incorrect - this is a 1S only ESC! Which is probably why the part number is HK1S, and it is designated "HK 1610 1S" on the PCB.

The SOT-23-6 part is apparently a boost regulator because

The mosfet marked with SP1 645 is possible to be "SSM6J501NU P-channel 10A FET" - this is what google has found and it seems to be in the same package as the one in your photo. You could try to search for it's pair, filter on a supplier website 10A N-channel mosfets in that package and see what you get.

I also damaged the same ESC by connecting it to 2S battery as it was advertised, I plan to fix it, if I find the N-channel part number meanwhile I will edit this post.

alexICalexIC
1
New contributor
alexIC is a new contributor to this site. Take care in asking for clarification, commenting, and answering. Check out our Code of Conduct.
\$\endgroup\$
add a comment  |

Not the answer you're looking for? Browse other questions tagged mosfet identification motor-controller or ask your own question.

0
What are the two big transistors on a ESC
0
Using a IR2125 to drive a MOSFET gate
3
LED circuit stopped working when expanded
3
MOSFET input capacitance variation with Vgs
0
Does this high side n-ch mosfet bootstrap circuit work?
1
Can GaN FETs be driven directly by logic level signals?
1
Why won't this chip switch?