I have some questions and wanted to get feedback on this circuit I have put together. Basically to see if there is something I missed or obvious that I should change or should have designed differently.

I have the valve running at around 20Hz and with a 100k POT I can adjust the duty cycle from about 6-88% which is outside of the effective range that the valve actual functions (~14-78%). I have soldered this together on a breadboard and have it running in my S10 and have not ran into any issues yet. So although they say "if its not broke dont fix it" I would like to learn from my design mistakes and try to build a better device. Down the road I would like to change this from an open loop to a closed loop setup and swap out the 555 for an Arduino and add a MAP sensor to read a value in and use a PID loop to actually target a boost pressure and not just a duty cycle.

So these are the questions/concerns I have.

Voltage Regulator: I used a 7805 for the 5v regulator due to its popularity. Is this an acceptable choice in an automotive environment?

MAC Valve Control: The MOSFET I chose is the FQP30N60L and chose that just because I have a lot of them from some of my Arduino projects and the fact that it works at logic level. I know it is much larger than I need since the MAC valve I am controlling only pulls 5.4 watts and the MOSFET is rated for 30 amps. Is there an issue with running an over sized MOSFET in my application?

Power Filtering: The C1 and C2 values on each side of the voltage regulator I got from the datasheet for the 7805. I am not sure if there is a reason for me to change these values or not.

The last question 2 questions I have are about the resistors from the 555 output (pin3) to the gate of the MOSFET. Do I need a pull down resistor in this scenario? I have only used these in the past on Arduino projects where I wanted to control a floating input pin. I had a coworker who deals with electronics suggest it to me. Is it necessary because the original circuit I tested in my S10 did not have this and it seemed to work fine.

Also is the 1K resistor that is in series needed to just limit the current from the 555 timers output to the gate? Is it necessary because the original circuit I tested in my S10 did not have this and it seemed to work fine.

I have attached a picture of the schematic.

Thank you everyone for your time and input! 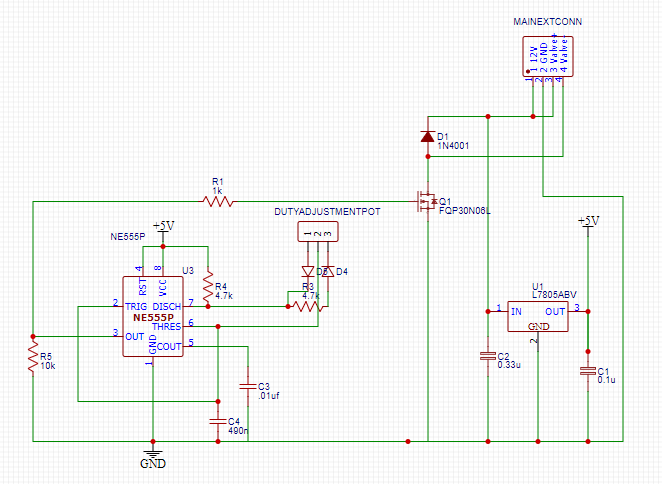 It looks pretty good to me.

At 4.7 ohms R4 is too low resistance, use at-least 33 ohms here something like 1K would be a good size

R3 basically has the same effect on circuit operation that R4 does so it could be combined, however a resistor in series with D3 would create an upper limit on duty cycle so maybe you should put a resistor there instead.

The over-capable MOSFET will not be a problem, the larger they are the less they heat up.

R5 just wastes electricity, the 555 already has a strong internal pull down when the out pin is low.

Not the answer you're looking for? Browse other questions tagged 555 automotive astable 7805 or ask your own question.