I am learning the method of Fast Analytical Circuit Techniques (FACTs), based on the Extra Element Theorem of the late Prof. Middlebrook. In the future, I intend to teach an undergraduate-level course based on these techniques.

I’ve been looking for an example that could really showcase the power of FACTs, and I believe I found the perfect one: the following unbalanced bridge circuit, for which the equivalent resistance must be calculated (i.e. \$V_{in}/I_{in}\$, where \$I_{in}\$ applied to the bridge terminals marked \$V_{in}\$ and ground in the figure.) 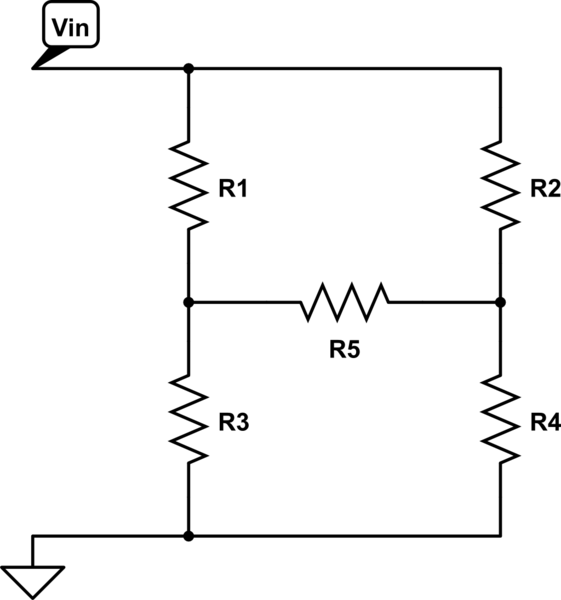 Solution with the EET

The solution is easy enough when you apply the Extra Element Theorem. I'll evidently consider \$R_5\$ as the extra element. Recall that:

\$\left. Z_{eq} \right\rvert_{R_5 \to \infty}\$ is obtained by taking out \$R_5\$ from the circuit and calculating the equivalent resistance seen from the input terminals (\$V_{in}\$ and ground). When this is done, it is easily seen by inspection that:

\$Z_d\$ is obtained by zeroing out the excitation source (\$I_T\$ in this case, which becomes an open circuit) and calculating the equivalent resistance seen from \$R_5\$'s terminals. Again, it's easily seen by inspection that:

Combining the results, we find that the equivalent resistance is given by:

I'm looking for the best "elementary" circuit analysis technique that undergraduate students might reasonably have heard about, that could be used to analyze this circuit, short of the EET itself. I just want to make sure I won't be surprised by a different way of solving the circuit that I hadn't heard before, ruining the intended dramatic effect of showing how easy it is to analyze circuits with the EET (never mind the meaningful low-entropy expressions obtained with it), compared with everything else they're familiar with

For now, I tried mesh analysis, with the three meshes that can be immediately identified from the figure. Note that the left-hand side mesh coincides with \$I_{in}\$, so only two currents remain to be solved. Writing out these two equations (naming the upper mesh \$I_2\$ and the lower mesh \$I_3\$, with current flowing clockwise inside each mesh), I get the following equations:

From these, I get the following expression for \$I_2\$:

Finally, writing out the equation for the remaining mesh:

Plugging the expressions for \$I_2\$ and \$I_3\$ and performing some algebra on these unwieldy expressions, the following result is obtained:

I should mention it took me nearly about two hours to write and debug this expression, whereas the EET solution took about two minutes and was correct on the first try.

The other obvious alternative is nodal analysis, which I didn't try out at first since an extra equation will be required. I started working it out by nodal analysis, but stopped as soon as I realized how complicated the expressions were getting -- much more so than by mesh analysis. I estimate it would take at least twice as long to work out the algebra as it took using mesh analysis.

Any other alternate solutions?

To restate the question: are there any other ways to analyze this circuit other than the EET, mesh and nodal analysis, that might rival the simplicity of the EET?

I don't know if I would consider the nodal analysis method to be that much more complicated than mesh analysis, but you do have to apply two key strategies:

I'm going to denote node a the left side of the bridge and node b the right side of the bridge. Assume current flows through the resistors top-left to bottom-right (I really should include a circuit diagram with these assumptions and labels).

As far as difficulty goes: 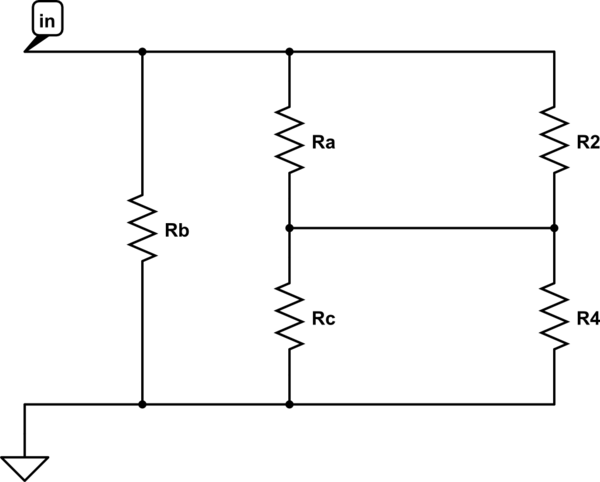 This is just an idea and may be badly incorrect....

Consider the source V(in) as split into two identical sources and then use impedance superposition (I’ve made that name up) to short one of those two new sources to ground. Then ditto the other invented source. For each instant, calculate the impedance seen by the one remaining source.

Then combine those impedances in parallel? Maybe: -

And, just in case anyone wants to compare results (because the formulas are so different), may I suggest that R1 is 1 ohm and R5 is 5 ohm with the others in between.

I get a combined impedance of 1.789 ohms for what it's worth.

It's clearly a stupid idea because it's obvious when you do a simulation: - 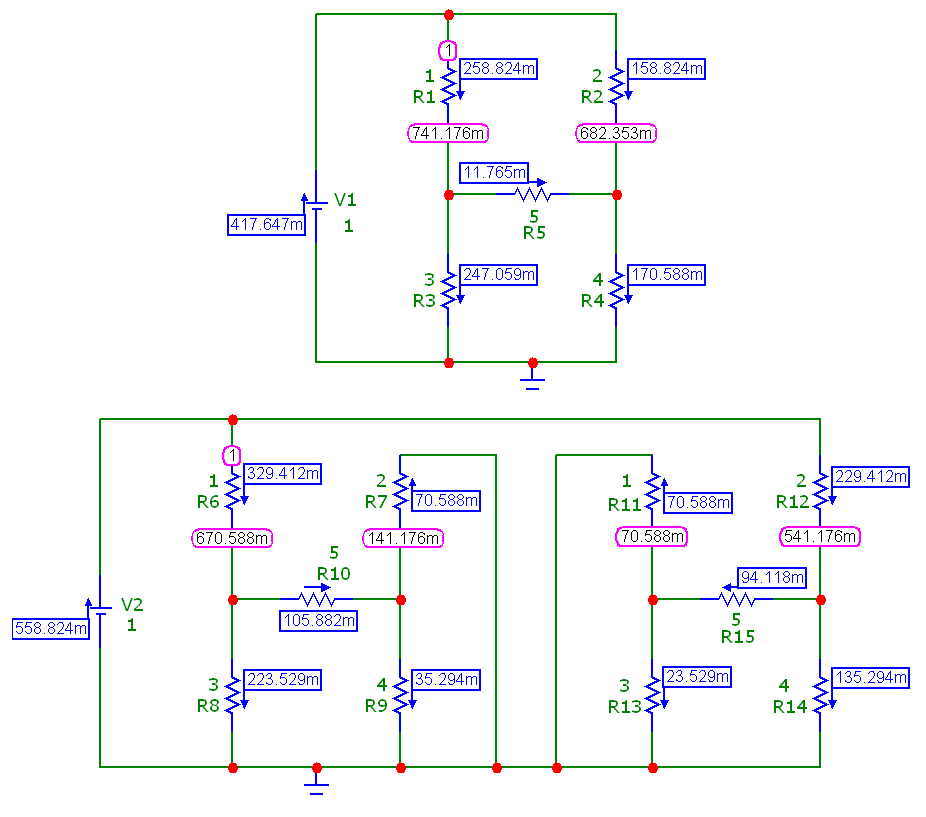 I've left this answer up because at least it's a way to compare formulas numerically.

Not the answer you're looking for? Browse other questions tagged circuit-analysis teaching or ask your own question.

2
Nodal Analysis algebra simplification
3
Why can't you divide a series + parallel circuit into branches to get total current?
3
I can't derive a differential equation from this complex RLC network
0
Analysis of a modified Howland Current Pump
1
Writing the Nodal and Mesh equations for large circuit and large supermesh
0
Circuit analysis - determine the voltage and current on branches
2
Nodal and Mesh analysis