I have two questions concerning the placement of the inductor in an led driver circuit using the AL8860 by Diodes Inc.. I'm refering to the typical application circuit below: 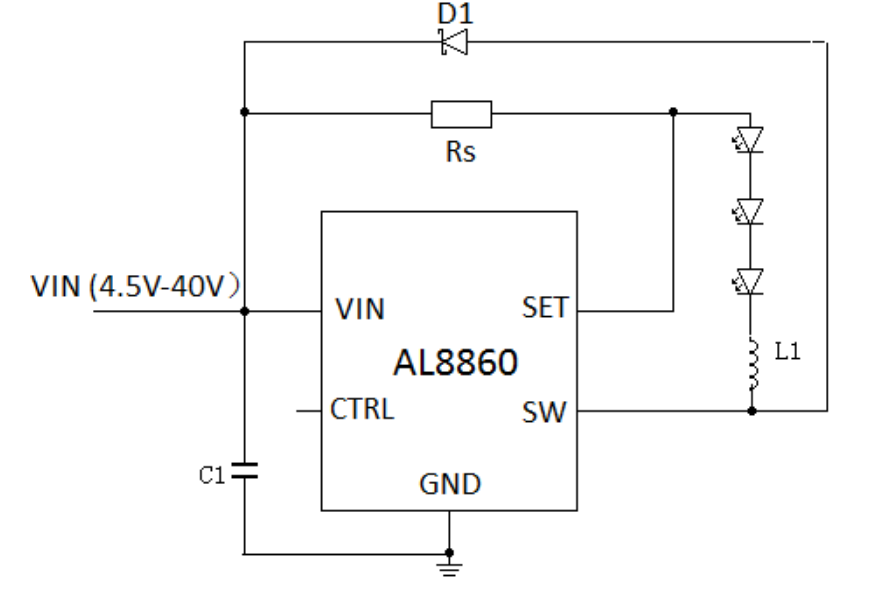 In their layout guidelines they recommend to "place the inductor as close to the device as possible" and while I understand why this is done with specific components like e.g. bypass capacitors, I don't understand why I would have to do so with an inductor in this case. As the inductor's purpose is to smoothen the current so that the switching regulator has enough time to do its work, I would have expected that it doesn't matter where exactly the inductor is placed.

You are ignoring parasitics. By keeping the inductor close to SW, you insure that the high dV/dt node (SW) does not have extra parasitic capacitance which might lead to unwanted resonances or cause you to fail radiated emissions, etc. This is really the answer to both of your questions. You can swap positions between the LED's and inductor IF you keep the SW node (and all LED nodes) very short. But it is less optimal than putting the inductor right next to SW.

It is a good question though. If you naively look at the schematic only and give no consideration to parasitics from the layout, then for sure you can swap the positions of the inductor and LED's. The regulator would never know the difference. And in the real world, it would probably work to some extent. I mean, the LED's would still light up and be regulated, etc. There would just be side effects or potential side effects due to parasitics.

In the real world, reducing the length of high dV/dt nodes is a good idea.

The inductor does smooth the current, but not the voltage. While the inductor will keep the LED cathode voltage from changing abruptly, it does that by filtering out the PWM edges that the IC is generating. So you have a series of pretty smooth signals, except for the node connecting the IC to the inductor. That one has nasty edges and is best kept short.

The AL8860 uses the inductor to control the current. It switches at 1 MHz and adjusts the current as detected by SET and \$R_s\$ by controlling the on time (and the switching frequency.)

You want the inductor close to the chip because other wise it will be radiating quite a signal a 1MHz. There's upto 1.5A of current flowing through pin SW. The inductor does smooth that out, so traces on the far side of the inductor don't broadcast as much interference.

That's also the reason you want the LEDs on the other side of the inductor from SW. You'd have the LEDs and all associated traces and wires trying to carry that 1MHz, 1.5A signal. That would generate lots of interference.

This is 'peripheral' to the main question but important to note:

This statement is "fairly wrong"

While the inductor does indeed "smooth the current" it's an important but secondary role.

The inductor acts as an energy storage and retrieval system that allows the energy transfer to the LEDs to be averaged. The energy input to the system during on cycles is averaged and applied to the LEDs "more orless evenly" across the whole on + off cycle.

When SW is "off" current cannot flow via SW to ground but instead flows via D1 back to the "top" of Rs, completing the current path. Energy stored in the inductor provides the energy to drive the LEDs until the controller detects via Rs that "it's time to provide more input energy".

The ratio of on to off time in a lossless system is inversely proportional to Vin:Vload.
As you add losses the on:off ratio increases to compensate. (In some systems Ton is fixed and Toff will thus shorten).

Not the answer you're looking for? Browse other questions tagged inductor layout led-driver constant-current or ask your own question.