(If these points moves the post into "too narrow" territory, feel free to ignore them :-)

So, the question is: is this possible, with acceptable results? The main goal is, of course, to allow High-Speed (480 Mbit/s) communications.

According to the USB specification, the differential pair should have a differential impedance of 90 ohm, and a to-ground characteristic impedance of 30 ohm. However, USB appears to tolerate a fair bit of abuse; an SMSC app note (PDF) where they discuss 2-layer USB 2.0 PCB layout mentions that the single-ended impedance isn't as critical as the differential, and that a "45 to 80 ohm" range is acceptable.

The board specs are 1 oz copper, with 63 mil FR-4 in between.
According to a few impedance calculators, such as this one (which, unless I misunderstand something, doesn't display the single-ended impedance as well), it appears that 50 mil traces with 10 mil spacing gives ~90 ohm differential and ~80 ohm Z0.
(Those values are from the Saturn PCB Toolkit calculator which is free, but requires download.)

The traces would be on the order of 3 inches long, and likely go in an upside-down U shape to go near the board edges, so that I have space to route everything else (sub-MHz signals only) without breaking the ground plane under the USB traces.

I do of course realize that the entire endeavor is a bit insane; however, again, it's for a hobby board, and it appears to have been done by serious companies as well.
High-speed is really still a bit beyond me, but the rest of the project is simple; I just need to get this signal across the PCB and everything else is a piece of cake.

If you missed it, the main question is: is this possible, with acceptable results?
If there are better 2-layer routing methods (for example, this short article uses coplanar waveguide routing for this purpose), please do tell. I can't find much information (that is both detailed and understandable, but with no details or equation/calculator mentions) about this at all.

The requirement is for a PCB layout for a pass-through between USB2.0 A and B connectors on a PCB. The rest of the circuit on the PCB does not interact with the USB signal path.

By changing the physical arrangement of the two sockets to be close together rather than at opposite sides of the board as originally envisaged, the signal trace length and transmission effect concerns are alleviated.

Further, by setting the two connectors at right angles to each other, at one corner of the board area, the need to leave space between them to allow cables to be plugged in, is addressed: The cables would be connected along different edges of the board and would not touch each other.

This allows simplification of routing as well: 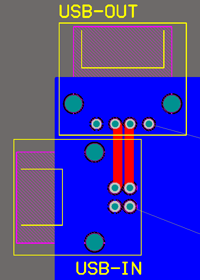 Concerns that may need addressing: