Why is a Flush needed in the MSI cache coherency protocol when moving from Modified to Invalid?

While studying the MSI protocol as described in different sources such as:

they say that when moving from Modified to Invalid due to a BusRdX (another cache wants to write to the line), that the cache must write back to memory, or a "Flush" in the Wikipedia terminology.

However, I don't understand why this is needed. Wouldn't it be more efficient instead to:

If this approach is wrong, could anyone provide an example of how it would lead to a data loss problem? Or is there another more external reason why this Flush is needed?

This question somewhat supposes that cache-to-cache transfers are possible, which I'm not entirely sure. Here is a video that discusses that: Cache To Cache Transfers - Georgia Tech - HPCA: Part 5.

I believe in these models that there is no direct access to another processor's cache; values can only come from (a) the main memory or (b) a bus snooping operation.

I would also look at this from the perspective of the programmer's model of the synchronisation instructions on the CPU. There will usually be "compare and swap" and maybe an "atomic increment". Both of those require the old value.

The "stale" cached value absolutely does have to be invalidated in the cache of the other CPU, and I think you've correctly understood that.

I will let somebody else provide a full answer to your questions. For now I've included a table of state transitions for the MSI protocol taken from Sorin, Daniel J., Mark D. Hill, and David A. Wood. "A primer on memory consistency and cache coherence." Synthesis lectures on computer architecture 6.3 (2011): 1-212. Observing an Other-GetM (BusRdX) when in M state will transition to I state and send the data to the requestor. I imagine both variants could be considered "flavours" of MSI.

Theoretically, a CMP's bus could be split into control and data components where the former is the only part snooped. In this case, it wouldn't be possible to transfer lines between cache controllers and the data communication would need to happen through shared memory. I'm not sure if such designs occur in the wild though. 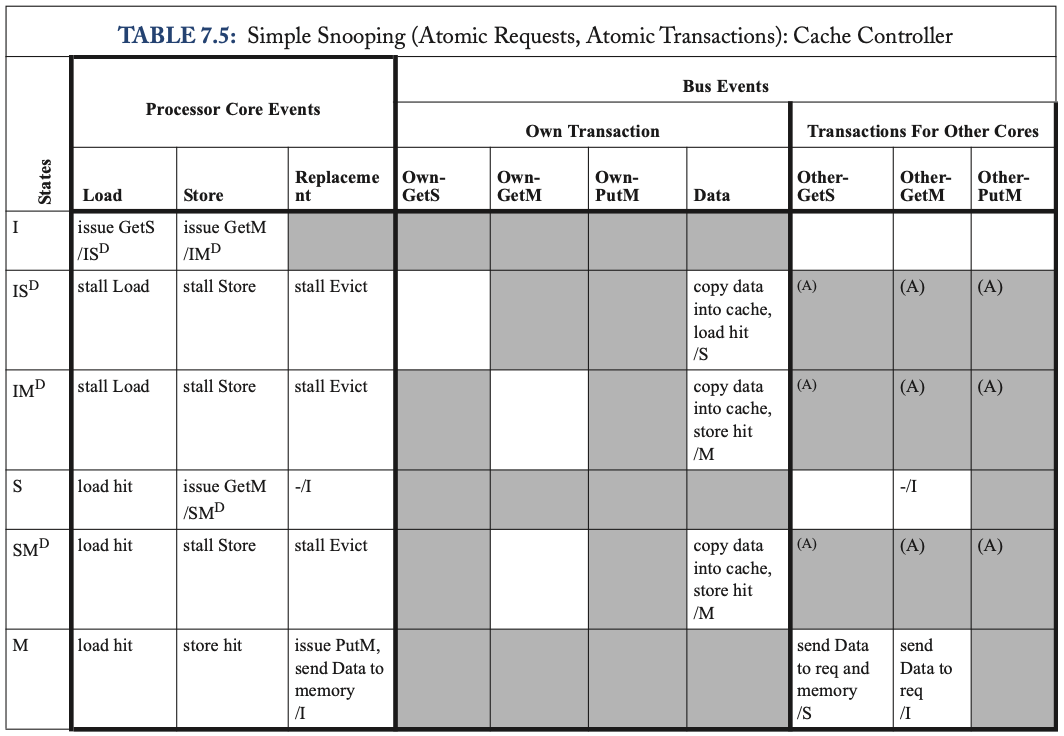 Not the answer you're looking for? Browse other questions tagged computer-architecture or ask your own question.

0
5-stage pipelined implementation (RISC) of a microprocessor
2
Why does reading 1 byte from hard disk has the same speed as operation reading 1000 bytes?
3
Why is the cache size identification register on ARM CPUs accessible from privileged modes only?