Why connection of longer stub lengths cause more intense ringing in a Communication Network like CAN?

As stub lengths increase won't the attenuation increase and lead to less ringing? Also the time taken for the multiple reflections will increase so won't the ringing be less?

Depends on the stub length. If the time it takes an EM wave to propagate down the stub and back is somewhat less than the rise time of the signal, then the size of any reflections due to impedance mismatches will be hidden inside the shape of the rise time waveform, e.g. the rise may be slightly faster or slower, but won't "bounce" or have any reverse dip, so might be hard to even notice with an oscilloscope. Make the stub longer, and the reflection voltage wave, if any, will arrive back after the signal has already completed risen, and thus will be quite visible.

And if a low loss wire stub is driven continuously at one of its resonant frequencies by the right impedance source, then it can act like an end-fed antenna, which is capable of generating some very high voltages, such as at the tips of a half wave dipole, where kilovolts are possible before the energy is radiated off and dissipated into EM waves.

"As stub lengths increase won't the attenuation increase and lead to less ringing?"

Yes, although the effects are very minor due to the relatively low resistance of the interconnects (copper in most cases). Sometimes you can help this situation by putting 10 ohm or 20 ohm resistors in series with the stubs that serve to dampen the reflections. But you really have to model your entire interface to see how much this gains you.

As to the effect of stub length on ringing, I thought I had posted some Hyperlynx simulations previously that showed this. I will try to locate the post or re-post those results here.

The following discussion of stubs assumes a single frequency signal, because it makes the discussions a bit easier. But keep in mind that for a square wave or even an edge, many frequencies are involved, and so the explanation is not quite as straightforward. Also, this applies to all frequencies, the only difference being the physical lengths at which they become apparent.

If the stub is short compared to the frequency of interest, then it just acts like a lumped-circuit. For a stub length less than ~1/20 of the wavelength, reflections come back to the main bus within the rise/fall time of the signal, and all you see is a little perturbation of the rising or falling edge.

With a stub length of ¼ wavelength, the reflections come back to the main bus 180 deg out of phase. This cancels out the signal on the bus, causing the classic “suck out” at that frequency. In an ideal case, the receiver sees no signal at this frequency.

Conversely, if the stub length is ½ the wavelength, the reflected signal comes back shifted 360 deg, so is in phase with the signal on the main bus, and adds to the amplitude.

You can extend this analysis to stubs that are multiples of ¼ wavelength or ½ wavelength. With longer length stubs, the resistive losses start to come into play. Note that resistive losses depend on frequency because high speed signals want to travel on the surface of a conductor and surface roughness of a copper trace can increase that resistance apart from what you might expect just from the resistivity of the conductor.

Now what if the stub is infinitely long? You get no reflection from the end (since the signal never reaches the end), but there is that impedance discontinuity I mentioned at the junction of the main bus and the stub. If the main bus is designed for 50 ohm impedance (close to 100 ohm differential impedance), as is the infinitely long stub, then at that junction the signal “sees” an impedance of 25 ohms (single ended), ~50 ohms diff, and so there is a partial (1/3) reflection at that junction back to the source.

Finally. The following picture, from one of Dr. Eric Bogatin’s Rule-of-Thumb papers, illustrates the suck-out effect of a stub (in this case an 0.2 in via) as a function of frequency. 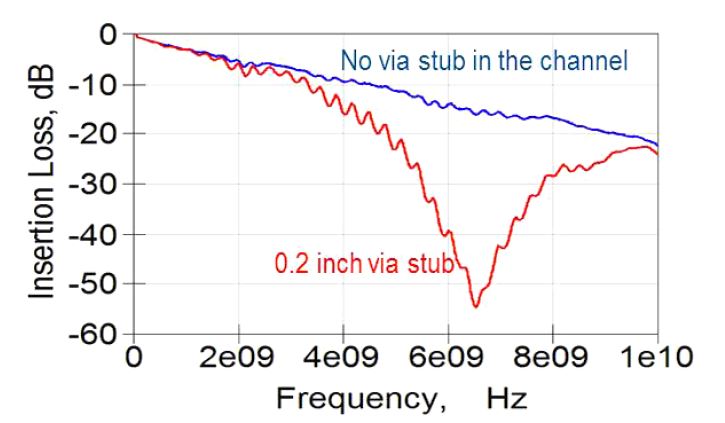 most of your CAN energy is well below 100MHz.

Not the answer you're looking for? Browse other questions tagged transmission-line signal-integrity ringing reflection or ask your own question.

0
How to terminate branches in a transmission line

9
Why does more bandwidth mean higher bit rate in digital transmission?
0
Transmission line: Why do longer traces cause signal reflections?
10
Ethernet RMII on two layer PCB
2
Why does turning a MOSFET ON too fast cause ringing?
3
How do reflections of a square wave cause ringing in transmission lines?
0
Why is the amplitude of ringing in square wave independent of frequency of square wave?
5
What is the meaning of "longer electrical length = more wavelengths"?