Why does a bipolar transistor not work, but a MOSFET does

In reference to my question Arduino Controlled Power Supply for more details and a test program.

Why is it that my circuit involving a transistor does not work (see below) whereas a similar circuit using a MOSFET does work?

The idea behind this circuit is to maximise the life of a 9V battery powering the Arduino. The idea is to allow an external physical event (pressing S1) to power up the Arduino. Then, the Arduino, via Pin D2, will keep the power on after S1 is released until such time as it has done what it needs to do. Finally the Arduino will drop Pin D2 to a low state to shut off the power.

Following are the two circuit diagrams.

Firstly the transistor based circuit - which does not work (the Arduino dies as soon as S1 is released - and it dies instantaneously). 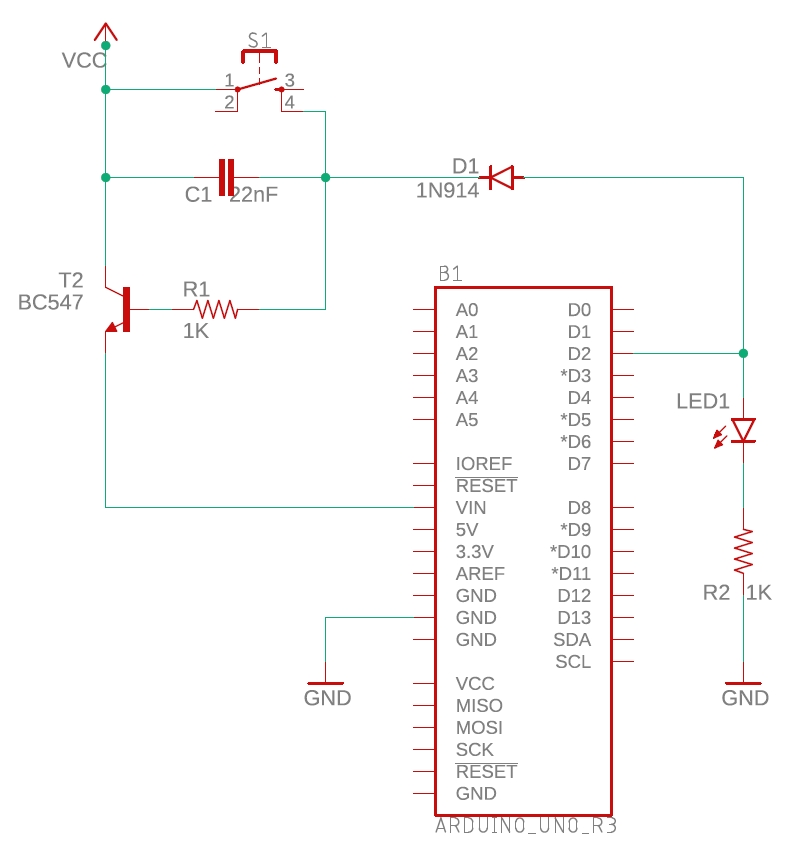 Secondly, the MOSFET based circuit - which achieves the desired result, but the Arduino gradually "fades away" when D2 goes LOW. This is OK, but it would be nicer if the Arduino powered down much more quickly. 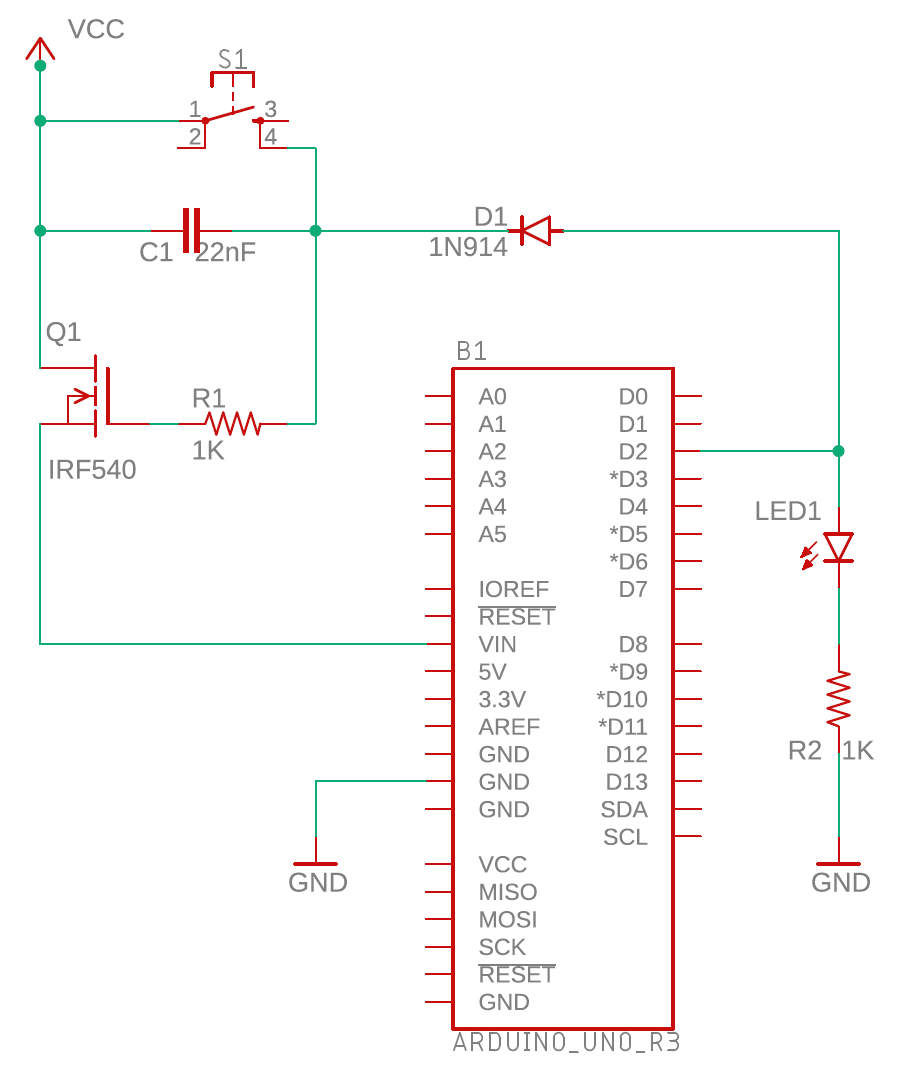 In the BJT circuit the switching transistor should be PNP with a second NPN transistor to provide the drive current to it.

My circuit below is remarkably similar to the one Russel posted and it has been tested with an Arduino UNO. It switches the twelve volt supply pre-regulator.

The push button injects current into the NPN transistor which in turn injects current into the PNP transistor that powers up the Arduino. With the UNO the capacitor is required because it takes a long time for the UNO to start up and to set the ON_PIN high. The capacitor discharging through the 5k6 resistor keeps the base of the NPN supplied with current until the ON_PIN takes over.

The circuit on the left with the diodes allows further push button presses to be sensed so that you could signal other functions to the code or, as I do, use it as an abort.

I have used variants of this circuit with batteries to power IR and WiFi remotes using other MCUs, e.g. Adafruit ItsyBitsy. When the circuit is off the leakage current is under 1 micro amp making batteries last months between charges. Circuit values have to be adjusted for other supply voltages. 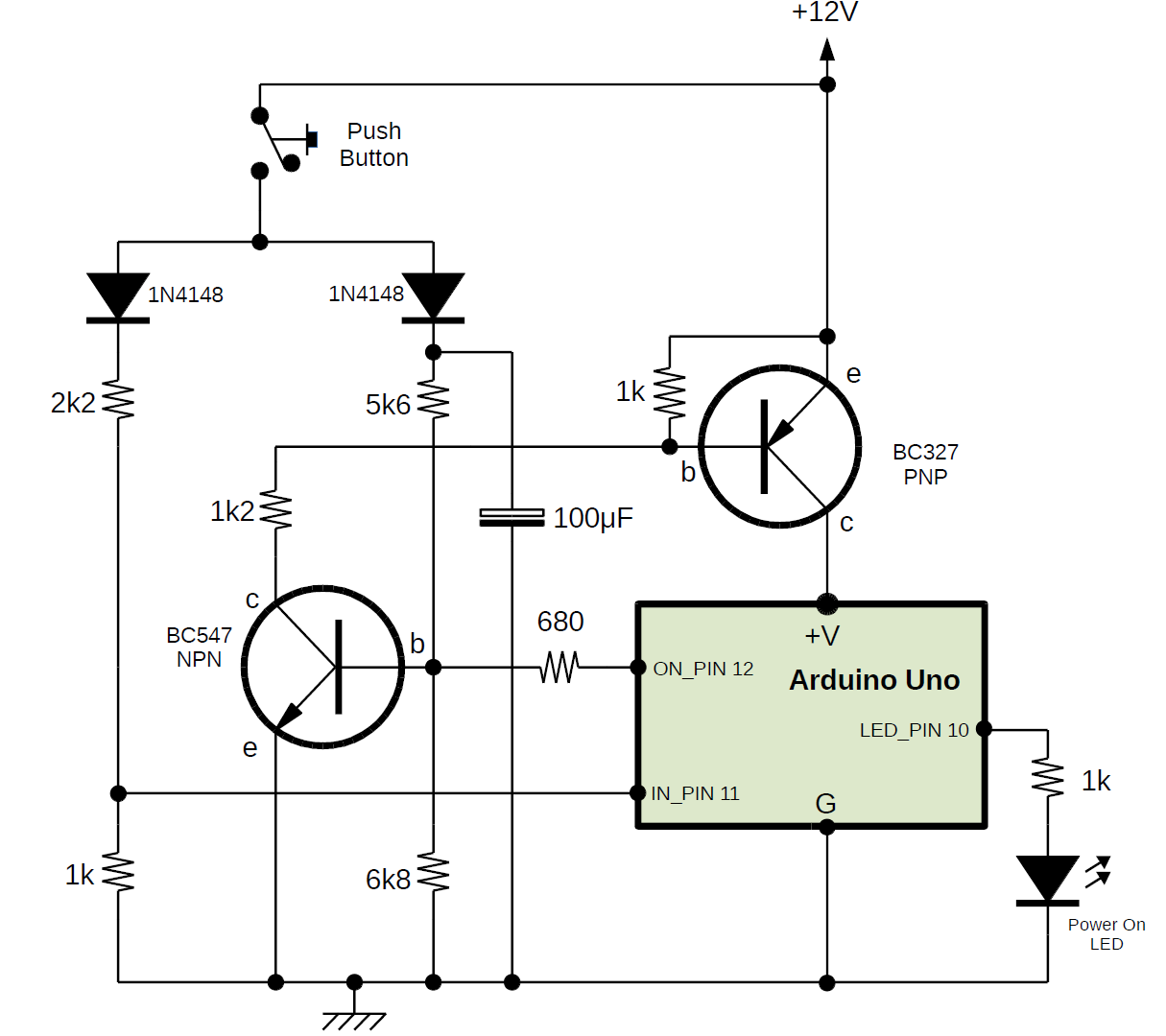 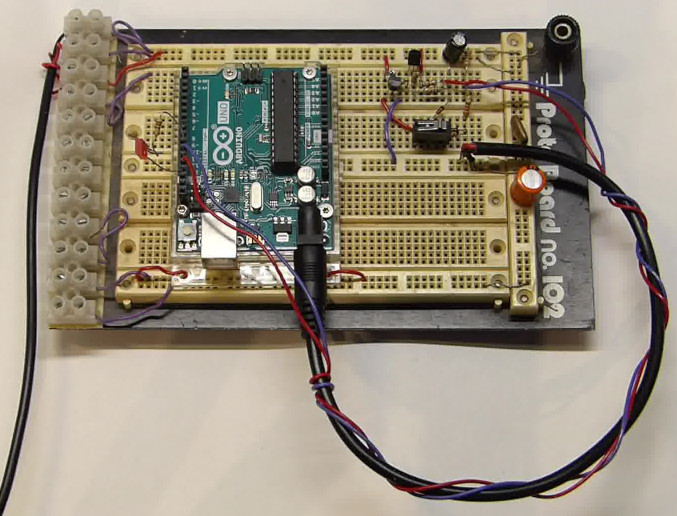 The above is a solution to your initial problem but, to answer some of your questions:

For the FET the answer is similar but, as others have said, the current needed by the gate of the FET is tiny, and the charge on the gate of the FET will hold it on until it leaks away. There is no mechanism in the circuit to actively discharge the gate when the D2 output is pulled low and that is why it doesn't switch off under D2 control.

You say, "Presumably this is due to the 100uF capacitor", exactly. The capacitor charges almost instantly from the push button and discharges at a rate controlled by the 5k6 resistor. With other boards (ItsyBitsy and Feather) I didn't need the capacitor but, with the UNO I did. The start up time that I saw was around 1.5 seconds.

Another feature of my circuit that I like is that, although it is started by a button here, it can cactually be triggered by any sensor that can provide enough current to turn on the base of the BC547, e.g. a door switch, a temperature or light sensor going above a threshold, etc.

I'm not convinced that this is the most elegant circuit / method to achieve what you want (switching on/off your Arduino). More on that below.

But anyway, my guess is that the main difference between the circuits is that the NPN transistor needs a (small) base current in order to conduct. That base current can only flow when C1 (22 nF) is being charged. As C1 has a very small value, charging it takes only an instant, then there's no more base current, Q1 switches off, the Arduino stops as it has no supply voltage.

The MOSFET doesn't need a current, it just needs a voltage. The gate of a MOSFET is isolated so no current can flow. The only way that C1 can charge is through the leakage current of D1. Wow, that's scary, relying on a diode's leakage current! No experienced circuit designer would do that willingly.

All-in-all your circuit creeps me out, I would never do this like that. What would I do then? First of all, letting some circuit switch on/off its own power supply is always a bit scary and actually not needed. I have made a project where an Arduino runs on 2 AA batteries in series and is continuously connected to the battery. Those AA batteries last for more than a year.

For this I removed the voltage-regulator chip on the Arduino board (leaving it in place and using the 3.3 V supply pin might also work) then I programmed the Arduino such that it goes into sleep mode most of the time. In sleep mode it consumes very little power.

I suggest that you find similar battery powered Arduino projects and see how they do that, then just do the same.

Bipolar transistors require a continous flow of current. As soon as they are deprived of current through the base, they turn off.

In the MOSFET case, the transistor is being held on by its own capacitance. There's actually no way it can be pulled low other than by leakage back through the diode. Current does not flow from the gate to either the drain or source.

The transistor approach could probably be made to work by changing it to a PMOS which requires being held low to turn on.

Edit: Falstad simulation with the Arduino replaced by a wire, which shows it initially turning on (pulse through C1) then very slowly turning off as leakage through the diode. Falstad doesn't simulate capacitor leakage, which may also be relevant.

The circuit below will do what you want.
Direct replacement with suitable MOSFETs would also work.
Component values are correct as shown but could be altered to optimise results.

Many other small bipolar transistors will do what you want, but the ones I have shown (especially the BC327-40) are better suited to the task than many. The "-40" suffix means it has a high current gain and the BC327 / BC337 have a higher current handling capacity and lower Vsat (minimum turn on Vce) than most other small bipolar transistors. Despite the less usual BC suffix they are widely available internationally.

The BC327-40 will handle 100's of mA and has a voltage drop of perhaps 0.3V.
A suitably low Rdson MOSFET will produce minimal voltage drop in the same role.

Positive input at D2 or D1 will start or hold the circuit on.
Q1 turning on turns on Q2.

If required, turn off delay could be added by adding a capacitor from Q1 base to ground. A MOSFET in this location will allow a far higher value of R1, making turn off delay longer for a given C1. 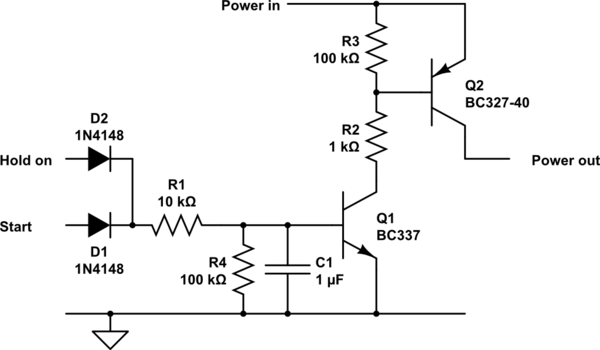 Here is a MOSFET version.
R1 & R2 in the bipolar circuit are not needed.
R4 and C1 set a turn off time constant - about 0.1 second as shown - so turn off times is 0.1 to a few tenthos of a second depending on the FET (lower Vgsth = longer turn off time).
MAny MOSFETs could be used - I've left the standard circuitlab defaults in place but they have much larger current and voltage capabilities than need, larger Rdson than necessary and Vgsth is OK for 5V and not low enough for 3V3 operation. 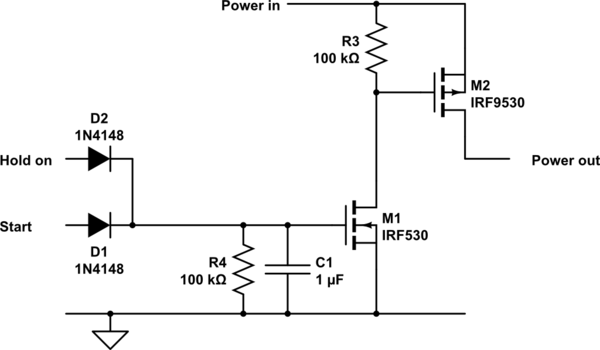 Your first schematic doesn't work because it's trying to pull itself out of a mire by his own hair.

An NPN requires its base voltage to be higher than the emitter voltage in order to conduct. Yet Arduino is powered via the same NPN's emitter, so it obviously cannot produce a pin voltage higher than VCC, so the NPN closes and the Arduino shuts down.

I don't understand the purpose of C1. IMO that's what could cause the fade-away. MOSFETS can stay on with very minimal current. Connect the gate to GND with a resistor between 22 to 100khoms. Also theorically, C1 should turn on the arduino when Vcc is powered up.

In both the mosfet and bipolar circuits, the output (source in the mosfet and emitter in the bipolar) will always be less than the control voltage. Since the arduino output pin never can reach the supply voltage, as soon as you let go of the switch, the switched supply voltage drops and continues to drop. Using a PNP avoids that problem.

Use a PNP transistor and invert your logic. 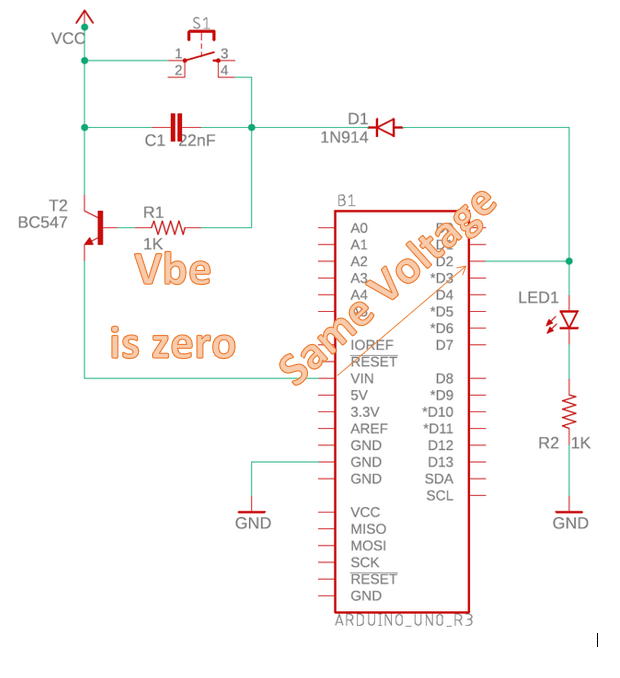 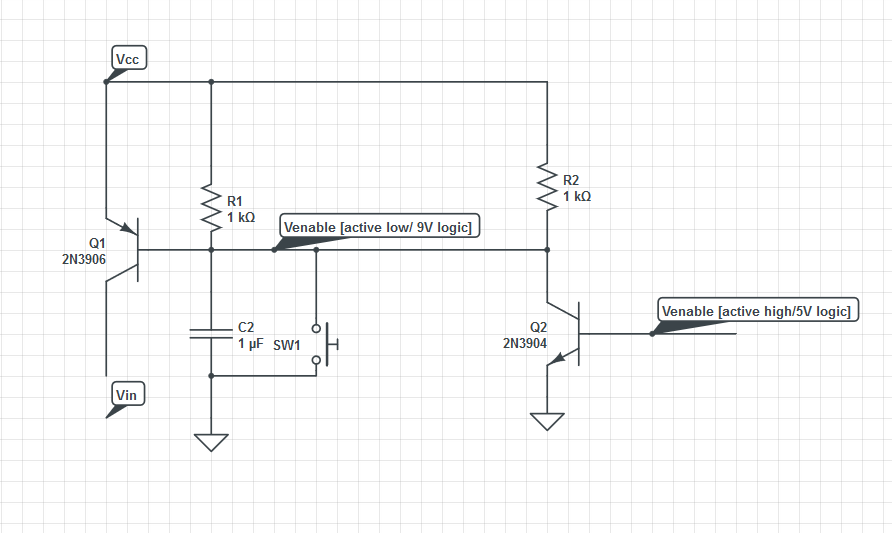 4
Microcontroller soft off circuit not working - why?
0
Arduino power on button problem
2
Arduino complete self shutdown
1
ORing for Arduino Mini Pro
1
Arduino battery power stay on for button - Not quite working
3
Arduino controlled power supply
1
Will this work? Transistor to keep the uC power supply on once a trigger happens
0
Soft latch switch circuit with buck converter load does not work
3
How does current flow with external battery for DC motor and transistor