Why output of square wave signal after bypass capacitor is a triangular wave?

At medium frequency, output from square wave looks like exponential charging & discharging curve, that one I can understand. But what I don't understand is its output at high frequency. Why is it so ?

My circuit setup is simple, small amplitude signal fed directly into capacitor to ground. Output is taken from capacitor too. 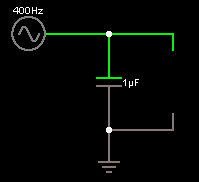 The above observation can be seen on all capacitor ranges, however, it is easier to see on not so small capacitor like 0.1uF. In short, at high frequency, output from square wave turns into a triangular wave.

The Fourier series for a triangle wave is Odd harmonics shift in phase by 90 deg from a square wave with 12 dB/ odd octave more attenuation.

and the square wave

Both have only odd harmonics but differ in the slope of the peak value for each harmonic. However triangle harmonics are much smaller. As n increases, the amplitude reduces by 1/n², whereas a square wave reduces by 1/n. Triangle waves harmonics also alternate phase (+/-sin) with increasing n.

To simplify my explanation, the capacitive load on a 50Ω gen. gives a frequency response or Transfer Function of;

, which you know gives the exponential time response to a medium square wave where f is near 1/RC .

But for high frequency where RCs>>1 so the transfer fcn reduces to an integrator Hc(s)=1/RCs transfer function.

Applying this filter to the Fourier series of the square wave, its 1/n harmonic attenuation becomes 1/n² slope on harmonics of the triangle wave. Similarily the triangle wave source when filtered, its harmonic attenuation slope of 1/n² becomes 1/n³.
On a scope all you would see is a sine wave, but on a spectrum analyzer log scale you would see the 1/n³ slope of all harmonics ( i.e. 3rd order slope )

side comments added I believe there is value in the time you spend in the lab to match theory with practise. When it does not match, look at for a better equivalent circuit then verify your assumptions. If you have Java you can play with this programmable signal generator . Have fun ! Spend more time in the lab validating what you learn and bring the lab to your desktop then expand your horizons.

use the mouse pointer and left or right click...drag and adjust

When Integrate a step input and Dump, you get a Sawtooth waveform 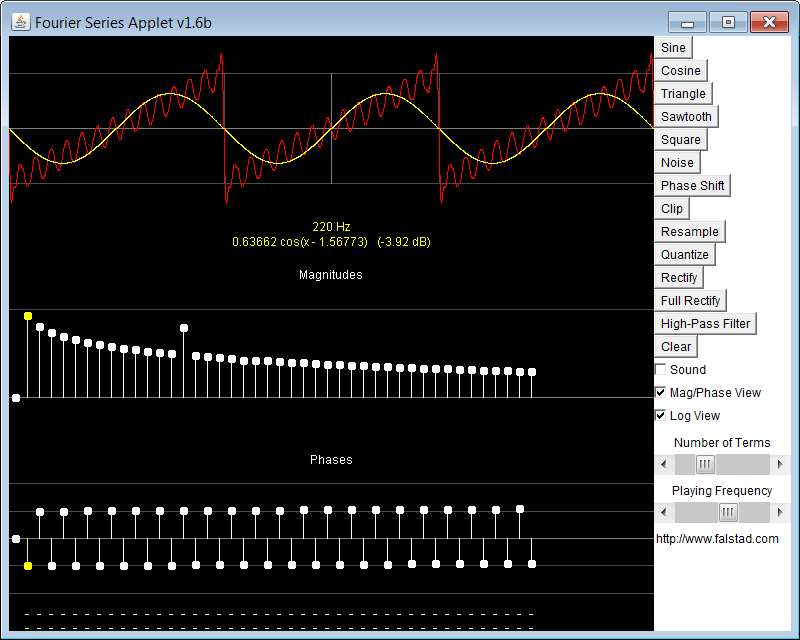 Here the mouse is hovering over the fundamental of the Fourier spectrum and the fundamental sinewave amplitude and phase are shown in yellow. Meanwhile I boosted a harmonic to similate a resonance on the sawtooth.

The combinations are "only limited by your imagination"

Here is a seat-of-the-pants explanation. The beginning part of the exponential curve, before it starts to "level off", looks very much like a straight line. At high frequencies, you don't get very far up that curve before the signal reverses and heads the other way. If you look carefully, you'll see the lines of the triangular wave aren't quite straight, just close to it.

Chances are, the sine wave you get from the triangular wave isn't quite perfect, either, but that's hard to see without a distortion analyzer.

Not the answer you're looking for? Browse other questions tagged frequency fourier or ask your own question.

2
Sawtooth/ramp waves with fixed amplitude from sine or square clock source?
5
Cannot get a digital square wave on oscilloscope from the GPIO of the Raspberry Pi?
4
Using 555 to generate square signal with fixed duty cycle / variable frequency
0
How do you convert a changing input (square wave) into a single high signal?
2
Which is the loudest in terms of sound intensity - Sine, Square or Sawtooth waveform?
4
What is the meaning of my fourier transform results?
1
Bias-tee for adding multiple frequencies to a DC line
1
Understanding Fourier, signals and spectrum analyzer
4
Coefficients and harmonics of a PWM signal
2
Importance of Sine Waves And Maxwell's Equations