I'm designing a solid state battery disconnect switch and I want to improve the mosfets' turn-on immunity (high dV/dt on Vds) without impacting the turn-off time. I don't really care about the turn-on time, it can be 100x slower than turn-off time, no problem.

I came up with this solution: 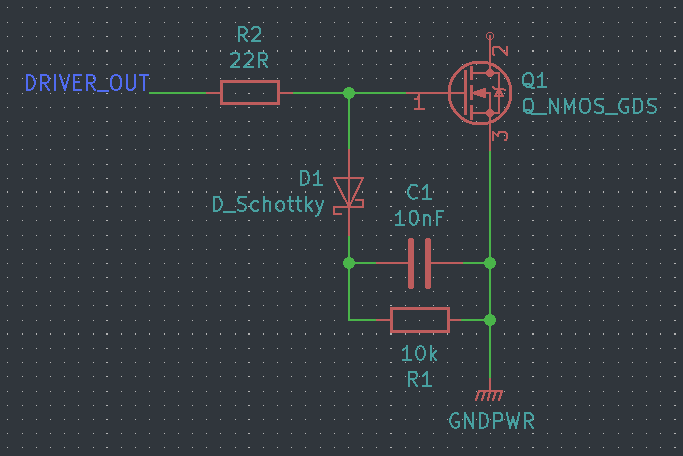 C1 obviously improves the immunity and D1 should leave the turn-off time the same. Did I miss something? is there a better way to do this?

I simulated your circuit using a similar FET with a transient suppressor added, switching a 'short circuit' drawing 1000 amps from a 50 V battery with 10 nH of wiring inductance. It 'worked' in that it had no effect on the switch-off time or power dissipated during the transition. However in this scenario the transition is slowed down by Miller effect, so (assuming adequate transient suppression) you should not have to worry about Dv/Dt causing the MOSFET to turn on again.

So when might Dv/Dt be a problem? One possibility could be if the battery is plugged in while the FET driver is not powered. In this case there could be a fast rising Drain voltage with only weak resistance pulling the Gate down. But would this cause the FET to turn on? Looking at the MOSFET's capacitance graph we see that Gate-Drain capacitance is ~800 pF at 50 V, while Gate-Source capacitance is ~12 nF. That corresponds to a division ratio of 16:1, so 50 V on the Drain could produce ~3.1V on the Gate. As the threshold voltage is between 2 and 4 V the FET might partially turn on for a few microseconds.

By adding extra capacitance to the Gate your circuit increases the capacitive division ratio which makes the power-on transient Gate voltage lower, (hopefully) ensuring that the FET stays turned off when an external voltage is applied.

So You can control On and Off time simply by selecting two resistors: Ron from Out+(ON) to Q1gate and

There is no need of any other components!

If you will drive 10 mosfets in parallel then Ciss will increase 10 times.

About driver supply: It is better to use bipolar to "prevent a dynamic turn on of the MOSFET". P.S. If you want to decrease dV/dt simply add an inductance to the load in series. (with all the consequences)

Besides your suggestion, there is something else you can do in order to reduce the unwanted gate voltage rise due to the parasitic leakage current.

Consider the following circuit: The mosfet is permanently grounded through the resistor R1 and a square wave with a slew rate of 100n is applied to its drain.

How it works: the leakage current is mostly a function of the parasitic capacitance and the slew rate dV/dt of the drain voltage. Thus, once the drain voltage starts to increase, part of it is coupled through the capacitor C2 and used to turn on the BJts. Due to their high speed, a few bipolars are connected in a cascade fashion in order to increase even more their gain. For a short moment, the gate of the mosfet is shorted and the parasitic capacitance is discharged.

In the waveform you see the effect of not using the circuit (C2 ~ 1p) and with a coupling capacitor (10n). Using this approach the gate voltage dropped by half. I must say that I never saw something like that in any application. The slew rate used in the simulation is extremely high (fast), and probably does not represent a real load.

P.S.: I did not consider any side effect of this proposal. 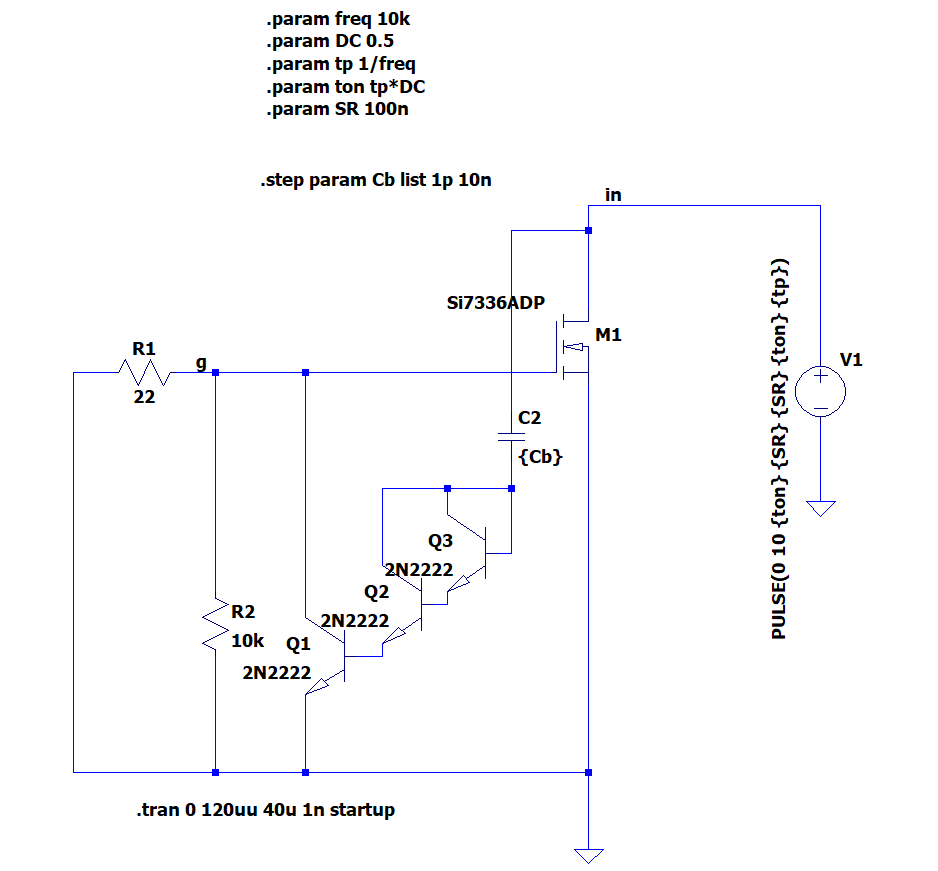 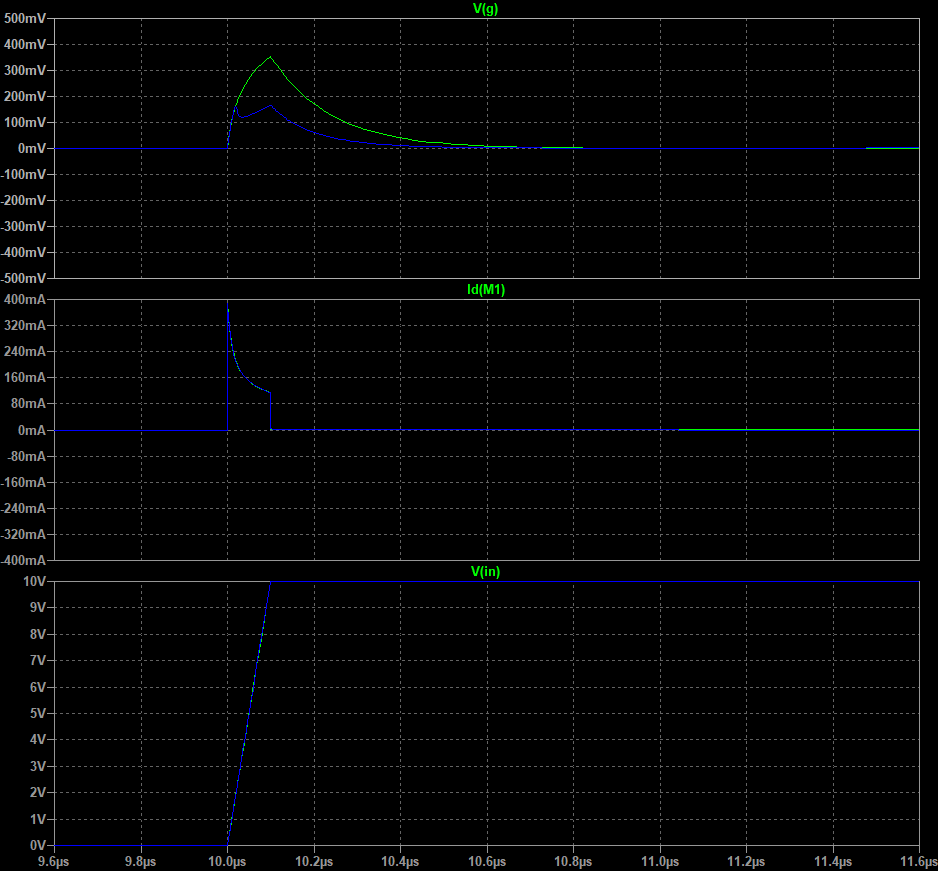 I used the solution I gave in the question with:

Also be warned the inductive voltage spike at turn-off is actually a significant problem contrary to what I thought, you must do something about it if your application is similar to mine. NB: TVS/zener diodes aren't good enough if your working voltage is 64 V and the mosfets have a Vdss of only 80 V.

Why not simply increase the switch-on resistance by adding R3? 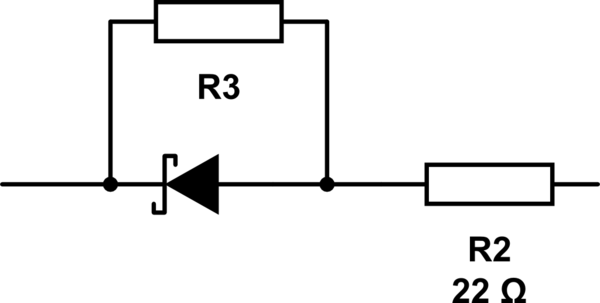 Not the answer you're looking for? Browse other questions tagged mosfet mosfet-driver nmos powermosfet or ask your own question.

2
gate current direction during turn-ON of P-channel mosfet
1
How do I calculate necessary mosfet turn on/turn off time?
2
Bipolar Square Wave Generator
0
How to drive power MOSFET by logic level signal without inverting phase?
1
MOSFET driver without gate resistor
0
MOSFET turn off time way too long, why?
3
MOSFET does not turn off totally
0
Drive P channel MOSFET with Arduino, unable to get desired behaviour (LOW pin, MOSFET ON)