Why are the IV curves of capacitors and inductors ellipses?

I don't really know what the difference is between a regular diode, a zener diode, a schottky diode or an LED. Neither do I knoe the difference beetween a DIAC, a TRIAC or even a NPN transitor.

The way I see it, the difference lies on the IV curves, how the component behaves at different voltage values, so I decided to buy a curve tracer from China like this one: 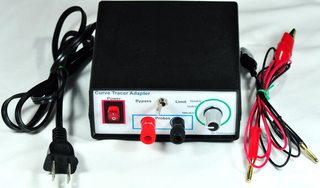 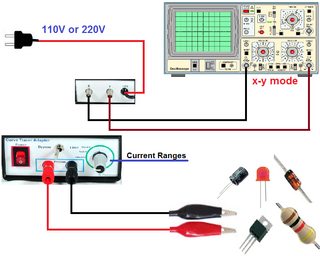 But before testing it, I wanted to make sure to understand the theoretical basis behind the IV curves of some basic components:

So, let's place a resistor, the IV curve must be a straight line. There is an equation to model this and it is called "Ohm's Law":

In its differential form, it can be written as:

The gray zone marks off the limit of the operating zone. If you cross the gray zone, you are going to have a burnt resistor.

From the resistor case it is possible to obtain two special cases:

By just increasing the voltage a little bit, the current is going to increase and go to infinite. You're also going to have a burt wire.

My problem comes with the next components:

The capacitance is described by:

So, in words, the current is equivalent to the derivative of voltage with respect time multipled by some factor C.

How does this relate to an ellipse?

The equation of an ellipse centered at the origin with width 2a and height 2b is this one:

But I have no clue, I don't understand why a capacitor can be modeled with that equation. What physical basis does it follows that makes it arrive to the equation of an ellipse?

Also, if you cross the gray zone, you are going to have a burnt capacitor, but I am not sure if the limits are correctly placed.

An inductor is described by this equation:

It is very symmetric to the capacitance rquation. By just changing v(t) to i(t) and L to C, you arrive at the same equation, so why is this one also an ellipse?

You might be asking, How do I know they are ellipsis if I have never seen an IV curve by myself? Well, I don't know, but that is what curve tracer sellers say on the internet: 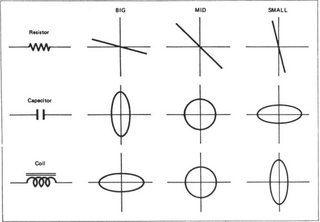 You are driving the L and C with a sine or cosine wave, right?

If you are driving the inductor or capaactor with a sine or cosine, the derivative terms for the inductor and capacitor I-V equations will cause more cosines and sines to pop out.

Intuitively, there is a lag time between I and V for capacitors and inductors. For L and C, one parameter reacts immediately while the other lags. The parameters are reversed between L and C so the ellipses between the two are turned 90 degrees, because the lagging parameter of one is the leading parameter of the other.

Hypothesis: B-H curves are an ellipse that is slanted the same way the resistor I-V line is slanted, rather than vertical or horizontal ellipse the L or C (until you saturate them then they turned S-shaped which still maintains a slant). Why is it slanted?

The slant in the I-V loops might have something to do with the fact the resistor is lossy and the B-H loops is also lossy. The inductor and capacitor have no loss so the curve is perpendicular (either horizontal or vertical). The B-H loop of a magnetic core that stores little energy gets narrower and skinnier so there is less area. Although, I have seen metglas B-H loops which have very vertical edges and so don't look like they slant very much.

Not the answer you're looking for? Browse other questions tagged voltage capacitor inductor iv-curve or ask your own question.

28
Why do smaller loads require larger inductors in buck regulators?
8
ESR and parallel capacitors
2
Decreasing the resistance in the input circuit of a transistor and its effect on the output current and voltage
0
Voltage increase per cycle across capacitor for a boost converter
1
Leakage Flux in a Transformer
3
Problem with load switching at capacitor resonant frequency
0
What is the change in voltage across an inductor, or change in current through a capacitor?
4
Question about ideal transformers and inductors
0
Doesn't a curve tracer harm modern circuits?