From this video lecture how come the initial current values are different in two cases?

I think they're assuming that the switch resistance is small in the first case. However how about if they're the same switch and hence same resistance, just different capacitance to make one slow switching and the other fast swtiching? 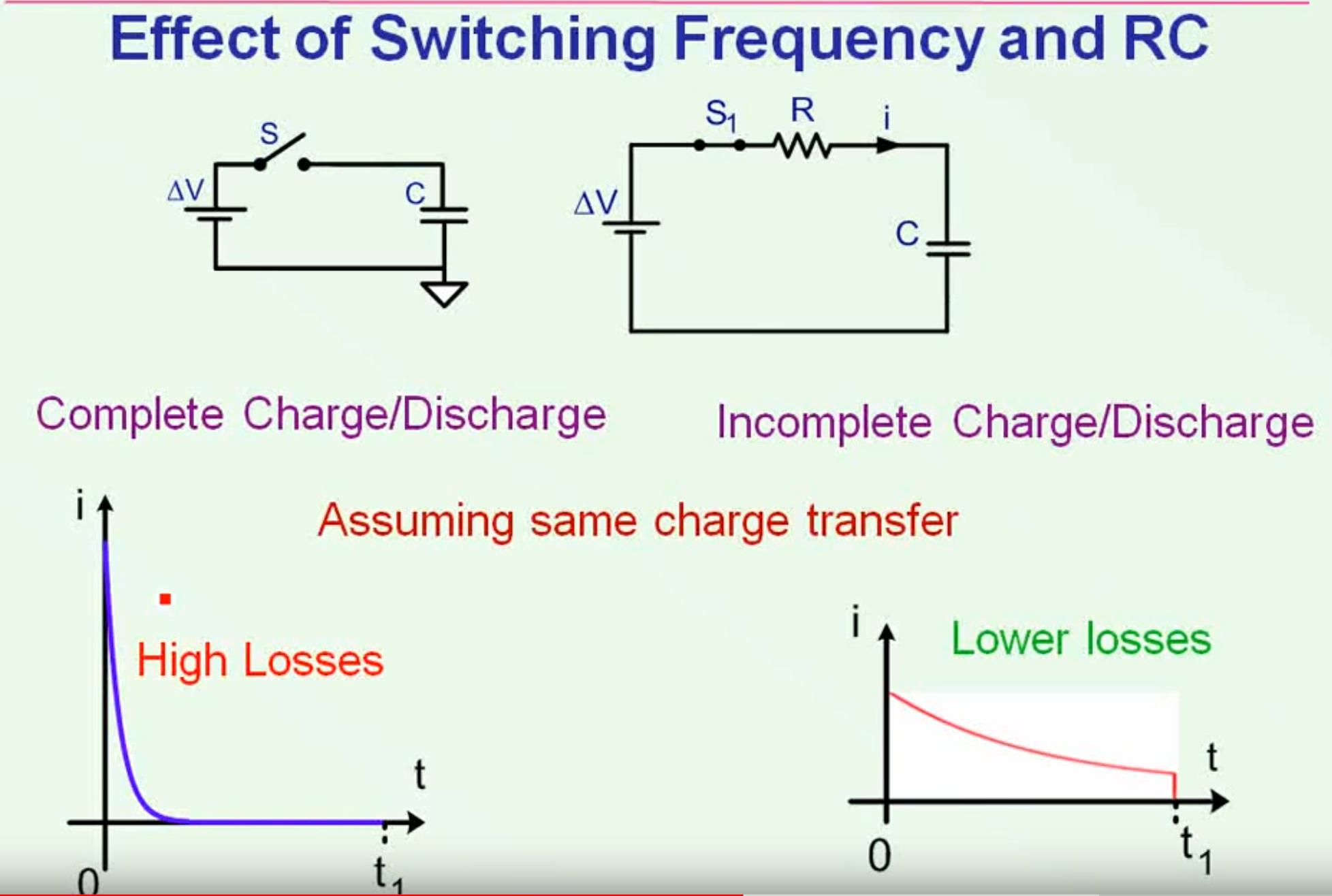 While the first diagram is pretty and simple, it's too simple to be worth simulating or drawing a graph for the theoretical current. It never occurs. It is a picture of a switch with zero resistance, connecting components with zero resistance. The initial current will therefore be infinite, which is non-physical. Think of it as that hoary old puzzle, an irresistable force pushing an immovable object. Given the terms as presented, it's not analysable.

The graph they present shows a decay to the current over time, which implies some resistance, contrary to the diagram. They say 'high losses', but where is the dissipative component? There is no resistor shown. When we draw schematics, all components are assumed to be ideal, a capacitor with no ESR, a battery, switch, and wires with zero internal resistance.

Interestingly, for the same capacitor and voltage, the losses are independent of the value of R, once the capacitor has become fully charged. Although in theory, the capacitor never becomes 'fully' charged, in practice, the error becomes exponentially smaller over time, and after 5 or 10 RC time constants (depending on your need for accuracy) it is generally considered to be fully charged.

If you charge a capacitor up to a voltage via a series resistor then the energy you use is \$CV^2\$. The energy obtained by the capacitor is \$\dfrac{CV^2}{2}\$ i.e. 50% of that energy is lost to heat. It makes no difference how small or big the resistor is; you get 50% energy transfer period.

However how about if they're the same switch and hence same resistance, just different capacitance to make one slow switching and the other fast swtiching?

It makes no difference to the energy losses; if the larger capacitor is charged to the same voltage as a smaller capacitor, the energy loss proportion is the same. This is why we need a combination of inductor and capacitor in switch mode power supplies; to get high efficiency. Resistors don't cut the mustard.

In an SMPS such as a flyback converter, an inductor is charged by applying a voltage across it and letting the current ramp up. The value the current rises to defines how much energy is stored by the inductor. It may be a surprise to find that there are no losses incurred; all the energy taken from the voltage supply are delivered to the inductor. This is because there is no collision involved.

I mention "collision" as an analogy because, when charging a capacitor from a voltage source there is a collision just as if two objects at different speeds were physically joined. The resulting momentum is the same (i.e. momentum, like charge is conserved) but, energy is lost. It's the same as when trying to start a car moving by quickly releasing the clutch; there is a risk of the engine stalling because of the collision. If you avoid stalling, the clutch will slip until the engine and wheels are up to speed.

If you charge a capacitor by applying it to a variable voltage source and lift the voltage from 0 volts to (say) 12 volts, there is 100% energy transfer with no losses. That is why we charge an inductor then discharge it into a capacitor to obtain high efficiency power supplies.

The linked video makes a statement that I think has been missed-- the Q transferred in both cases is the same. For this to be the case both resistance and capacitance in the larger tau case are larger than in the first case since the plot shows that there is not a full transfer of voltage at t-on. Putting this constraint into the analysis results in less loss for the larter tau case.

Not the answer you're looking for? Browse other questions tagged capacitor circuit-analysis dc-dc-converter loss or ask your own question.

0
What is the dependence of current through inductor in parallel RLC CIRCUIT with a AC source at resonance frequency
2
Why do electrons move as if on conveyor belt in a circuit?
1
Discharging a capacitor with an analog switch
1
finding missing current and voltage in a circuit involving superposition
0
RC and RL circuit transient behaviour
0
How to analyze a capacitor connected to a DC voltage directly (no resistor)?
6
Simple question about the difference between Thevenin resistance and non-Thevenin resistance