Can we use pir sensor while it's moving?

I fixed the pir sensor on the top of servo motor.while the servo motor's rotation the pir was also rotated by servo motor's motion.but the problem I had founded that pir sensor had always indicated motion of human which I realized through a buzzer. When I take of the sensor from servo motor it had worked as well. So my question is that can we use pir sensor while it's moving?

A PIR sensor on its own is effectively just two Infrared sensors next to each other: 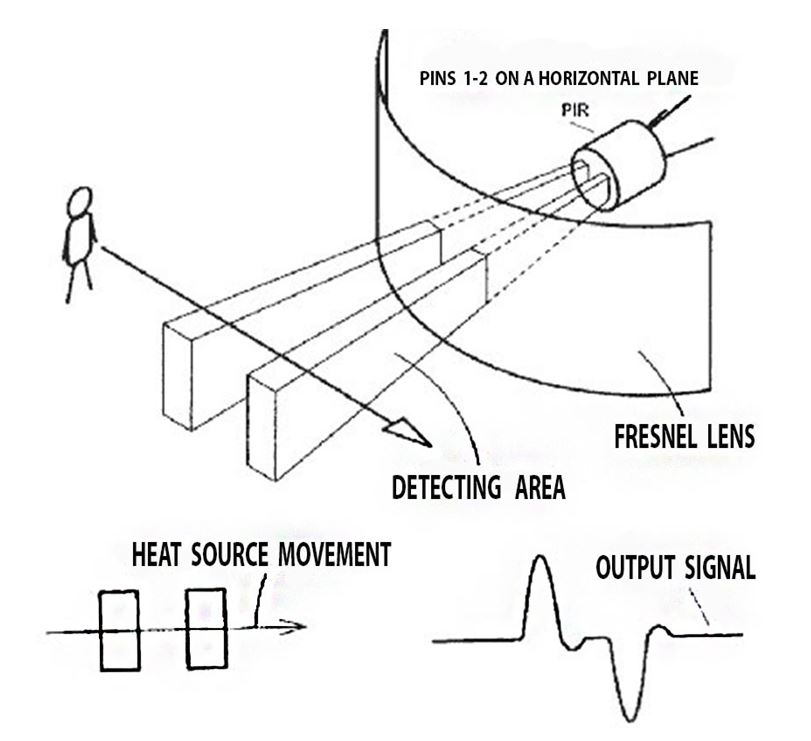 I assume you are using one with a fresnel lens on it, and a driver/detection circuit already built in. If so, it will be basically impossible to use it while moving, since it relies on detecting a change in temperature between two areas, and it will be detecting this constantly. They are meant for detecting motion, and you are moving all the time.

Even if you created your own driver, I imagine it would still be pretty difficult to do it (maybe impossible).

The illustrations in the linked MakerGuides article is not quite correct.

Figure 2. The type of Fresnel lens shown in the accompanying article.

The type of Fresnel lens shown in the article is used in lighthouse and theater lamps to give high aperture with short focal length. This is not what is required for a PIR motion sensor.

As shown in Figure 3, the lens used in a PIR motion sensor is not what is commonly known as a Fresnel lens. Instead, it is designed as an array of cylindrical or spherical lenses to give a pattern of weak and strong sensing zones.

So my question is that can we use PIR sensor while it's moving?

Probably not. You would need to stop the motion for long enough to take a reading and check for motion over a specified time period.

Not the answer you're looking for? Browse other questions tagged microcontroller arduino components arduino-uno or ask your own question.

0
PIR motion sensor connected to Arduino sometimes does not detect a repeatable trigger
0
Can you help me identify this board?

7
Servo Motor Won't Turn Without Push
2
Can the board inside a hobby servo be repurposed to drive an external DC motor
0
How to tell when the stepper motor is done stepping?
0
H-Bridge vs Mechanical Speed Controller
0
Stopping a servo before it reaches final position?
0
PSOC 5 interfacing with PIR sensor
0
Mechanisim or Circuit to detect angular position of rotating knob of Motor