When an AC source is connected with an inductor we have a continuous change in voltage and current across the inductor.

According to Farady and Lenz law we will get an equal and opposite voltage against the source voltage for each change of voltage or current across the inductor.

Now since we always get an equal and opposite voltage across the inductor for each change in source voltage so it means that the current will never be able to flow in the inductor but yet current is always flowing in each text book. I am confused about it. Please guide me. I shall be grateful to you. Note that it is an ideal case and we have no resistance in the circuit. 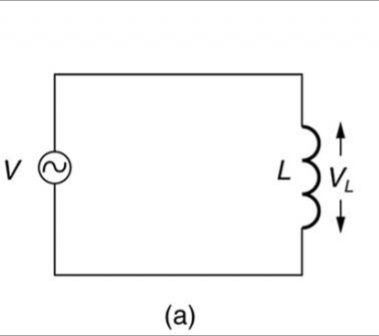 This means that if you want to solve for current in this particular circuit, you will have the superposition of any everlasting initial transient, and the long term steady state result. This will complicate your mental picture of what's going on.

The easiest way to resolve this is to connect the inductor at a time which gives you no initial transient. Paradoxically, this is at the peak of the AC voltage.

Connect the inductor. AC voltage is at its peak, inductor current is zero. Current starts to build, and continues to build until the input voltage has dropped to zero. As the voltage dips negative, now current starts to fall, and for a nice symmetrical waveform, current reaches zero by the time the voltage waveform is at its negative peak. That's the first half cycle done, run through the same argument swapping the signs for the second half cycle. This is one cycle of the steady state.

There are two ways of interpreting this current change with voltage behaviour that's summed up by the equation dI/dt = V/L. We could say that the current changes because of the applied voltage. We could say that the change in current generates a voltage exactly equal to that applied. Actually what happens is that both things happen at the same time. We cannot meaningfully say that one causes the other, in the way that kicking a ball causes it to move, because the moving ball certainly does not cause the kick, this cause-effect is not reversible.

You seemingly think the induced voltage is there at first and then "no voltage difference, no current can be born" That's reversing the cause and the consequence. As well one could think a freely falling object cannot fall because the air resistance has grown as high as the gravity. The error is the same. Air resistance needs the motion to exist.

The induction law in ideal coils (=no resistance, no capacitance, no radiation as radiowaves) has the following quantitative form: The current changes at rate = fed voltage divided by the inductance. That's the formula for the time derivative of the current.

Think about what happens when you have 0 volts applied across an inductor. You might say that there isn't any current and that would be one truth from many other truths. The reality is that if there was 1 amp flowing through an inductor and the driving voltage was instantly brought to 0 volts, that 1 amp would continue to flow forever (assuming a perfect inductor).

What I'm trying to say is that you can't define the current through an inductor by the voltage across it even if the back-emf appears to make the "true" or "real" voltage zero at any particular instant in time. The current in an inductor is dependent on previous events in time.

Another way of looking at it: the back emf being equal to the driving voltage makes the effective voltage across the inductor equal to zero. But we're not talking about the external terminals of the inductor any more: - 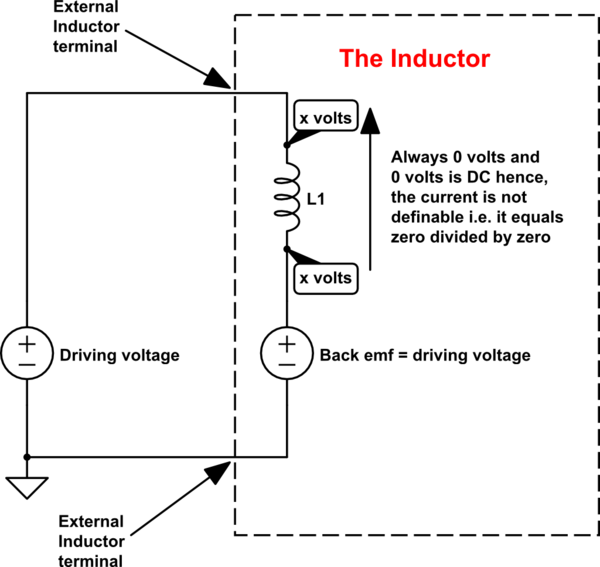 We're talking about an invisible untouchable node. Given there is 0 volts across this "internal inductor" the impedance has to be zero (because it is also DC hence, current is 0/0 i.e. indefinable at any instant.

We are left with the old tried and tested relationship, that being: -

And back-emf tells us nothing about the current that flows.

An inductor stores energy in the form of a magnetic field.

As you stated in the question: When DC voltage is connected over an inductor the rising current will be opposed by the induced back-EMF. This will only last so long as the field is increasing to its full strenght (until saturation).

During the positive half cycle of the source voltage, the inductor will store energy and during the negative half cycle, it will release the same energy that it previously stored.

Only when the frequency of the applied voltage is to high, the pulses are to brief to overcome the back-EMF, so the inductor will block the current. This is why inductors can be used in analog filters.

In response to the comment, consider a wire with a resistance R. For a current I to flow through it, the resistor needs a potential difference V across it, which is given by, $$V = IR$$ This is because of Ohm's Law. Now, smaller the resistance, the less is the voltage required to maintain the same current.
In the limiting case of extremely small R, an extremely small voltage is required for current I.

As an alternative explanation, if R = 0, V = 0 and the equation becomes: $$0 = I * 0$$. Clearly, all values of current will satisfy this equation. So now, the wire does not decide (or bother) what current will flow through it. It is the inductor which decides the current.

Given the instantaneous value of velocity, can you find the displacement? No, because the displacement depends on the initial values and the history:
\$s(t) = s(0) + \int\limits_0^t v(t)\,dt\$

At any particular time, does it make sense to have some displacement but \$0\$ velocity? Yes, after driving all day you rest.

Suppose you're at rest and some giant kicks on your ass with some force \$F\$. By newton's third law you will kick back at the giant with the same but opposite force \$-F\$. And that giant continues kicking you with variable force \$F(t)\$. To honor newton, you will also continue kicking back at the giant with force \$-F(t)\$. Here at any time both forces are equal and opposite. Do you stop accelerating because you're generating your own opposite force? No because you cannot feel the effect of your force on your own. You can feel only the external forces on you, so you accelrate at a rate \$\frac{F}{m}\$.

The voltage source kicks the inductor. Inductor kicks back with the same but opposite emf. However the inductor cannot feel its own emf, so it allows the current to change at a rate \$\frac{V}{L}\$.

The electric field associated with the changing magnetic flux is non-conservative.

Consider a circuit consisting of an ideal cell of emf Vs, a switch and an ideal inductor all in series with one another.

At time t=0 the switch is closed. The initial current must be zero which you can understand with an appreciation of the fact that mobile charge carriers have inertia and thus cannot undergo an infinite acceleration.

Noooooooooooooo. Of course you will have resistance ( more like impendance ), which will limit the average current ,equal to L2pf and will cause a phase shift of 90 degrees between voltage and current limiting even more power.

Not the answer you're looking for? Browse other questions tagged ac inductor back-emf or ask your own question.

6
How can there be a current without a voltage?
3
How does the inductor ''really'' induce voltage?

1
At t=0 the voltage across the Inductor will immediately jump to battery voltage. Why?
1
About misunderstanding of Lenz law
0
Lenz Law and Magnetic fields in an Inductor
0
Back EMF in an inductor with an AC supply
1
If the self-induced EMF in an inductor is 180° out of phase with source voltage, shouldn't they cancel out and net voltage should become zero?
0
Ideal inductor in DC circuit
0
Ideal voltage source connected with ideal Inductor