What is the point of this resistor network?

What is the purpose of this resistor network? Why not just use one resistor? or connect the cathode of RA93 diode directly to the mosfet drain (this mosfet is high side of the h-bridge).

It seems to me that pin 30 of the relay is connected to pin 87 through diode and the resistor network. I just am not able to figure out why? The diode is probably to preventing the circuit in case someone plugs in the battery terminals backwards, is this right? 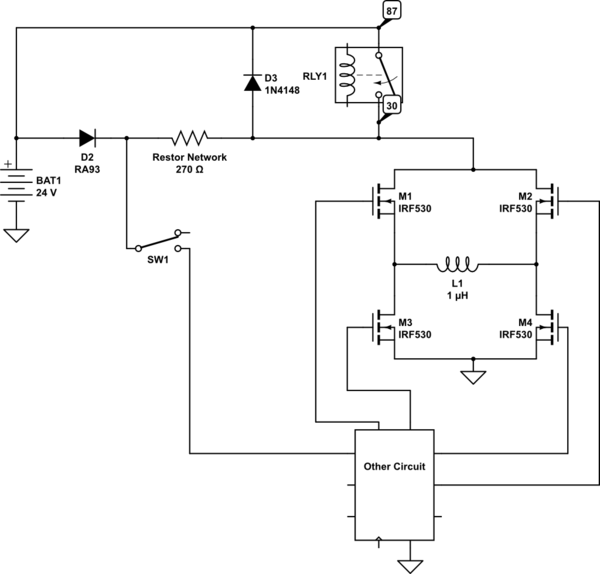 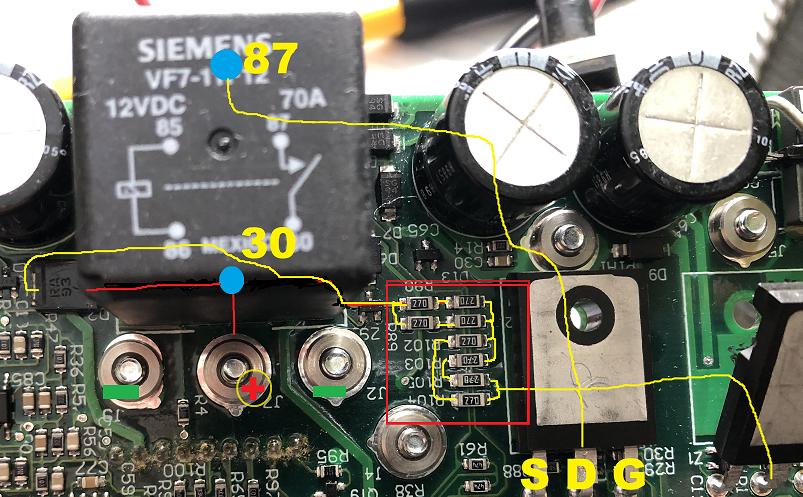 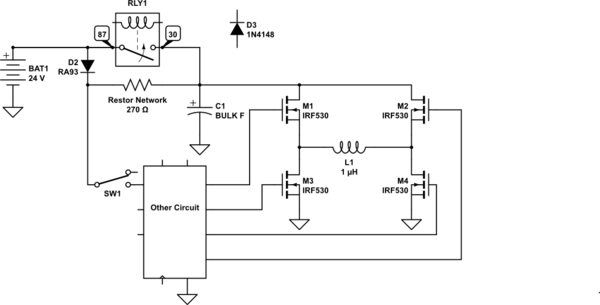 Alternate schematic (by @Transistor) emphasising bulk capacitor and relay bypass of soft-start. Purpose of D3 is unclear. Operator to review.

GrepsoftGrepsoft
10111 gold badge11 silver badge66 bronze badges
New contributor
Grepsoft is a new contributor to this site. Take care in asking for clarification, commenting, and answering. Check out our Code of Conduct.
\$\endgroup\$
add a comment  |

Your network seems to consist of a series / parallel combination of eight 27 Ω resistors that is equivalent to a single 54 Ω resistor. The significant thing is that these are surface mount and will be placed by machine.

Presumably eight are required for power handling. The circuit could have used one 54 Ω through-hole 1 W resistor but this would require an extra component and, probably, hand installation and soldering. With pick and place equipment this could be avoided for this component (although not for the caps, relay and MOSFETs) and possibly there were some savings by using resistors which had been bought in bulk for elsewhere in the circuit.

Another reason one might see series combinations is because of high voltage, such as dimmer-circuits, etc. The components may have a maximum voltage rating considerably less than the circuit voltage and this is solved by series connection of several resistors but that is not the problem in your application as it is low-voltage battery powered.

Rusk BoxRusk Box
30633 bronze badges
New contributor
Rusk Box is a new contributor to this site. Take care in asking for clarification, commenting, and answering. Check out our Code of Conduct.
\$\endgroup\$
add a comment  |
5
\$\begingroup\$

When the relay is open, power flows to the H-bridge (and the inductor driven through it) only through the resistor network. This is commonly done to reduce the inrush current when starting a motor; once the motor is running, the relay closes and power flows directly.

Startup is the highest current draw condition, so the resistor bank has to be able to handle it. The relay is rated for as much as 70 amps! So a resistor network is used to distribute the power dissipation across more than one individual resistor. These surface-mount devices are very small and can't handle much power by themselves, but as a team that capability is multiplied.

D3 is your standard back emf absorbing diode that stops collapsing magnetic field in coil from generating a transient and blowing fets.

JohnJohn
911 bronze badge
New contributor
John is a new contributor to this site. Take care in asking for clarification, commenting, and answering. Check out our Code of Conduct.
\$\endgroup\$
add a comment  |
0
\$\begingroup\$

They use several resistors for power dissipation reasons but the resistors are effectively shunting the relay forcing a certain level of current from the "H" bridge in order to trigger the relay. If the current that's required to operate the inductor L1 is too high, then the relay will trip. There is no frequency indicated so the actual load from inductor L1 is not known. However, if the load is too high or the frequency is too low the current will then be forced across the resistor network and the relay. This looks like a garage door opener overload circuit.

TedTed
111 bronze badge
New contributor
Ted is a new contributor to this site. Take care in asking for clarification, commenting, and answering. Check out our Code of Conduct.
\$\endgroup\$
add a comment  |
0
\$\begingroup\$

The resistores form a Current Dump! And as they are only Surface mount types can't individually shunt the Power so hence the Parallel in Series configuration. This is a very common way of Dumping Current and or Power in the Professional World.

|share|improve this answer
answered Mar 25 at 8:56

EK LekkyEK Lekky
1
New contributor
EK Lekky is a new contributor to this site. Take care in asking for clarification, commenting, and answering. Check out our Code of Conduct.
\$\endgroup\$
add a comment  |

Not the answer you're looking for? Browse other questions tagged diodes relay resistor-ladder or ask your own question.

1
Choosing a relay, suppression diode and transistor for switching car power from a PIC pin
22
Correct use of Flyback or Snubber diode across Motor or Transistor?
0
Diode parallel to resistor on H-Bridge MOSFETs gates
2
What is the use of the capacitor in this relay circuit?
0
Confusions with placing and sizing the flyback diode, TVS and Zener
0
What is a good resistor value for my circuit?
0
Why is this line connected to the microcontroller input in this schematic?