Choosing a relay, suppression diode and transistor for switching car power from a PIC pin

Here is my circuit that's hopefully going to be a custom timer circuit. It has two inputs (ignition wire and headlamp wire), it has one output that will be used to switch a relay. 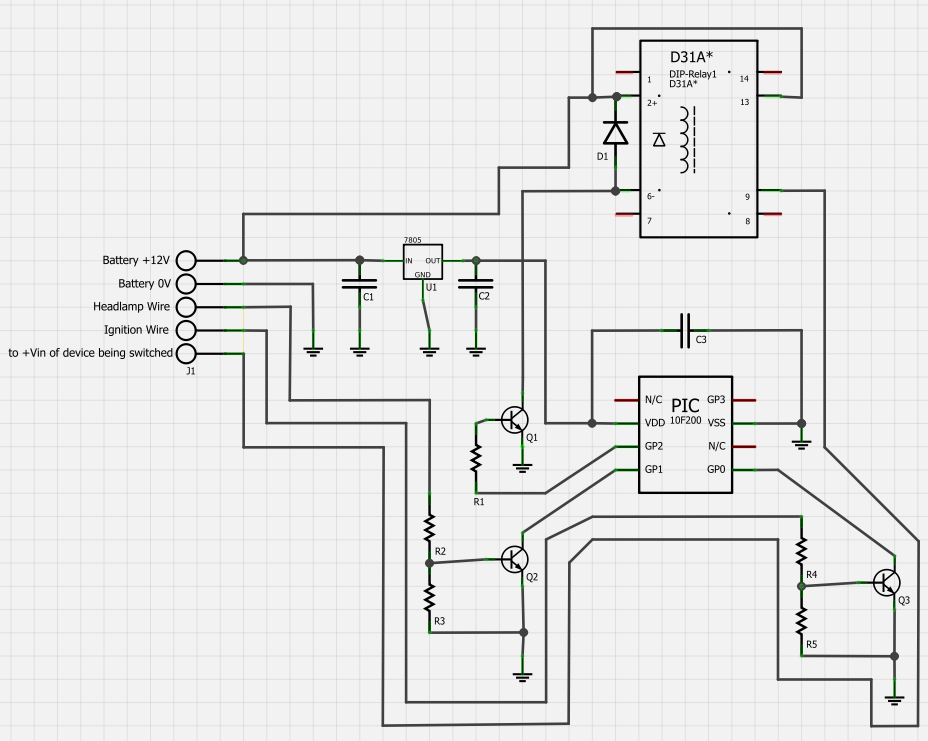 nb. "D31A*" is a Frizting part for a relay that's the closest I could find.

D1 is a suppression diode to protect the transistor from transient voltage when the coil switches. I'm somewhat confident it's wired the correct way, with the diode cathode connecting to the positive side of the coil.

The PIC pin is wired in series to a 10K ohm 1/4 watt resistor to the base of a transistor.

I have chosen BC547 for the transistor, because I have some spares, and the circuit works on my breadboad. I had tried with 2n4401's but the Collector/Emitter continues to conduct after the Base is pulled low, which I found a bit strange and could find no mention of in the datasheet. Perhaps something else is causing it?

The relay I like at the moment is this one: http://www.rapidonline.com/pdf/60-1910.pdf This has spade/blade terminals on the bottom and suits my environment.

The datasheet indicates the relay is avaialble with a diode built in, but I've been unable to find one and think it may be special-order only.

The load the relay needs to switch is 12V @ 1.5A continuous, 3A peaks. I'm using unregulated vehicle power into the positive side of the coil, is this okay? I had considered solid state relays but they're really expensive! Might one be suitable for this or is a 1.5A continuous with 3A peak too much?

*The device I'm switching on and off with the relay can handle unregulated vehicle power already.

Comments on your schematic and circuit:

Without part values, it is difficult to critique anything but the overall topology. That seems OK, within the detail provided by the schematic.

Added after schematic cleaned up:

I didn't look up the maximum input voltage of the LM2576. Check that it can handle car power glitches.

Check that the BC547 can support the relay coil current with a 10 kΩ base resistor driven to 5V. That should provide about 430 µA base current. If the minimum guaranteed gain of the transistor is 50, for example, then this can support up to 21 mA collector current. That's cutting it close if the relay needs 20 mA, and of course is insufficient if it needs more.

"I had considered solid state relays ... Might one be suitable for this ...?"

Wouldn't it be nice if a "solid state relay" could be used to replace a mechanical relay? Alas, all the "solid-state relays" I've ever used can't be turned off until their output current drops to zero. That's not what we want in an DC battery power application, but fine for switching AC power.

However, I've been told that, in addition to the "AC" SSRs I've used, there also exist:

The International Rectifier IPS6011PBF "Self-Protected Intelligent High-side Power Switch" seems specifically designed to do exactly the kind of automotive application you're trying to do. a b

Internally, such "DC SSR" and "AC/DC SSRs" typically use MOSFETs. As Olin Lathrop mentions, there's many other things to consider to get that MOSFET to work properly in all the extremes of an automobile power environment.

In this particular application -- connecting and disconnecting so-called "12 V" automobile power to some device -- you could replace the relay with a P-MOSFET.

Keeping the gate within the gate-source limits specified by the manufacturers is a bit tricky, and requires a few more components.

You still need something -- a few resistors and the BC547 may be adequate -- to level-shift the on/off signal appropriately to drive the gate of the FET.

For under $2 (less than the price of a relay), there are dozens of adequate MOSFETs in standard TO-220 packages at Mouser, Jameco, Newark, Digikey, and other suppliers. For example (randomly selected):

Something like one of those MOSFETS (plus all the other components mentioned) is in those convenient, easy-to-use SSR packages and almost-as-easy-to-use IPS packages.

Not the answer you're looking for? Browse other questions tagged pic relay diodes or ask your own question.

6
Understanding of Relays and associated circuitry
4
Choosing a transistor and resistor for PIC input pin protection from Car Power
2
How to calculate the required base resistor for this BJT-relay circuit?
2
Using unsuitable relay in transistor switching circuit?
0
Are my calculations for flyback diode/s corret?
0
Relay coil suppression with unknown switching tolerance
0
Controlling 3V3 relay from 2V8 (VL53L1X) GPIO output with PNP transistor
4
Understanding driving a relay with a transistor
9
Is this single transistor interface good enough for this relay-control?