How does a center tapped transformer work?

Here is my secondary transformer. So i measure between A and G and get 120V because A is 120V more than G which is 0. So now when i measure between G and B i still get 120V telling me G is 120V more than B, or B is 120V less than G. This is the part that confuses me. How can my center tapped wire G which is grounded be at a higher voltage than B when it is supposed to be 0? Thinking about it the other way still confuses me as well; how can B be at a 120V less than G, what would that mean? Can someone explain the theory behind why/how this works?

With DC it's obvious.

How can B be at a 120V less than G, what would that mean? Can someone explain the theory behind why/how this works?

You are forgetting that your meter only measures magnitude of an AC voltage. There is no sign so saying that B is less than or greater than ground doesn't make much sense.

Figure 2. For AC we have the same situation as with DC but with no sign - just the voltage magnitudes.

When working with AC, therefore, referencing to ground doesn't tell you what the voltage is between two non-grounded points. Let's look at a high-leg delta transformer arrangement which should be familiar to you in North America (but always looks so unbalanced to us Europeans). 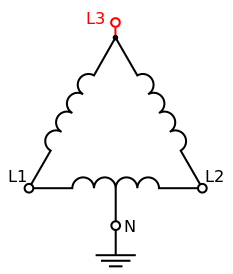 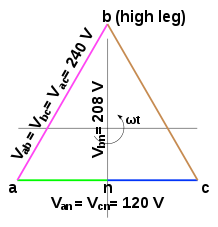 If you stick one probe of your meter into the neutral (earth) terminal and measure around the circuit with the other you will get:

These are all correct but without the knowledge of the transformer configuration there is nothing to tell you that these have three different phase angles. If we then take some more readings we get a better picture:

With three points and three same voltage measurements between any two of them the only solution is an equilateral triangle - a three-phase supply. Note again that all the voltages are "positive" as we are only reading magnitude.

The dots indicate identical winding ends (current direction being outward at the dotted ends and inward at the opposite ends at the same instant of time or vice versa). With the windings so connected (series-aiding), the total voltage would be 240 V.

With one of the windings being reversed (in series-opposition), the total voltage would be zero.

The outputs are anti-phase. When other phase has maximum, the other phase has minimum. If you were able to measure the phase, the other would be +120VAC and the other one -120VAC, but the polarity/phase is not indicated with minus sign, but with degrees of phase. Same as with two 9V batteries, it's 18V between ends, 9V over one battery and 0V center, and -9V between other battery and 0V center, and you are able to measure polarity because it's DC.

The voltages on A and B relative to G will be continually changing, but they will always be the same magnitude, but opposite polarity.

Try not to think about the voltage potentials in relation to the vertical direction of your diagram. Also, transformers work on AC, not DC, so the actual voltages are constantly changing with respect to each other in time.

0V is a relative term in AC. In fact, at 60Hz, A and G alternate being 0V 60 times a second. But it's convenient to think of the voltages as a magnitude, like when we put a DMM on said transformer and measure it.

The secondary can have many taps, not just a center tap. And the voltages on those taps can all be relative to a single common tap, or they can be isolated and independent from each other. That's the beauty of a transformer.

For example, in this schematic diagram of a transformer, it has two independent outputs, 30V and 18V, each with its own center tap. This one also has two options for inputs, which allows more flexibility for specific input voltages. 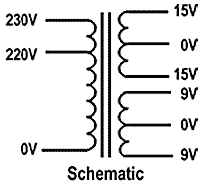 In the example diagram shows the center tap at 0V for conveniance, so that you can do the math to show the magnitude of the voltage between those two points. Tutorials point has a nice write on this and their image helps too. 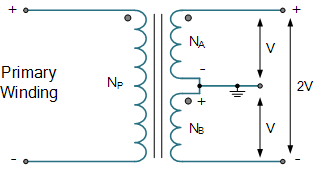 As you can see they have placed a ground symbol at the center tap. This is just to help as a reference point. The magnitude from measured on \$Na\$ and \$Nb\$ is still \$V\$ for each tap.

Assuming the line frequency is 50Hz then 10ms later A will be at -170V peak and B will be at +170V peak, both voltages being relative to G.

Not the answer you're looking for? Browse other questions tagged voltage transformer ground or ask your own question.