I built the following circuit to filter noisy pulses from a inductive tachometer pickup. The first opamp (U4D) acts as a peak detector. The second opamp (U4C) is a comparator which uses the output from the first as a reference voltage. The positive feedback on the comparator is for hysteresis.

I am getting a lot of noise on the output of the comparator. All of the technical articles I have read suggesting adding hysteresis (which I have already done) or using an actual comparator IC instead. Are there any other ways that I may be able to salvage this circuit? 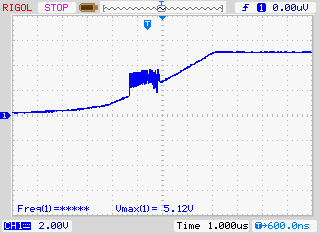 When comparator U4C output goes high (caused by the "A" signal from the first stage rising through the threshold set at "B") there is a reaction that lifts input "C" at U4D a little higher.

At the start of the sentences above I said U4C output went high but, that caused a chain of events that ended up with it going low pretty much straight away afterwards.

Do you see the problem? The problem is that the actual input ("C") to U4D can be manipulated by the output of U4C and that is because that TACH1 input is fed via R4, a 10 kohm resistor. If that resistor wasn't there i.e. it were a short AND the output impedance of the input voltage at TACH1 were very low then this wouldn't happen.

I expect your slewrate is too slow to push the 2nd opamp out of the linear region. So the circuit oscillates.

Not the answer you're looking for? Browse other questions tagged operational-amplifier comparator hysteresis or ask your own question.

4
OP-AMP Positive/Negative Feedback together
0
Rail-To-Rail Comparator Design
2
What is the drawback of a high-value resistor for positive comparator feedback / hysteresis?
0
Output State of comparator circuit for AC signal when open?
1
Feedback capacitor in comparator circuit with an OP-AMP
0
How can I modify this circuit for some hysteresis and better design?
0
Which Comparator could match this electronic circuit?
2
Output of LM393 won't swing LOW unless it is pulled up with a LED
1
Op Amp Output Voltage with Hysteresis
0
Input/output characteristics of opamp circuits involving diodes (fast peak detector and sine-to-block wave converter)