I have a couple questions about my DIY LED installation. 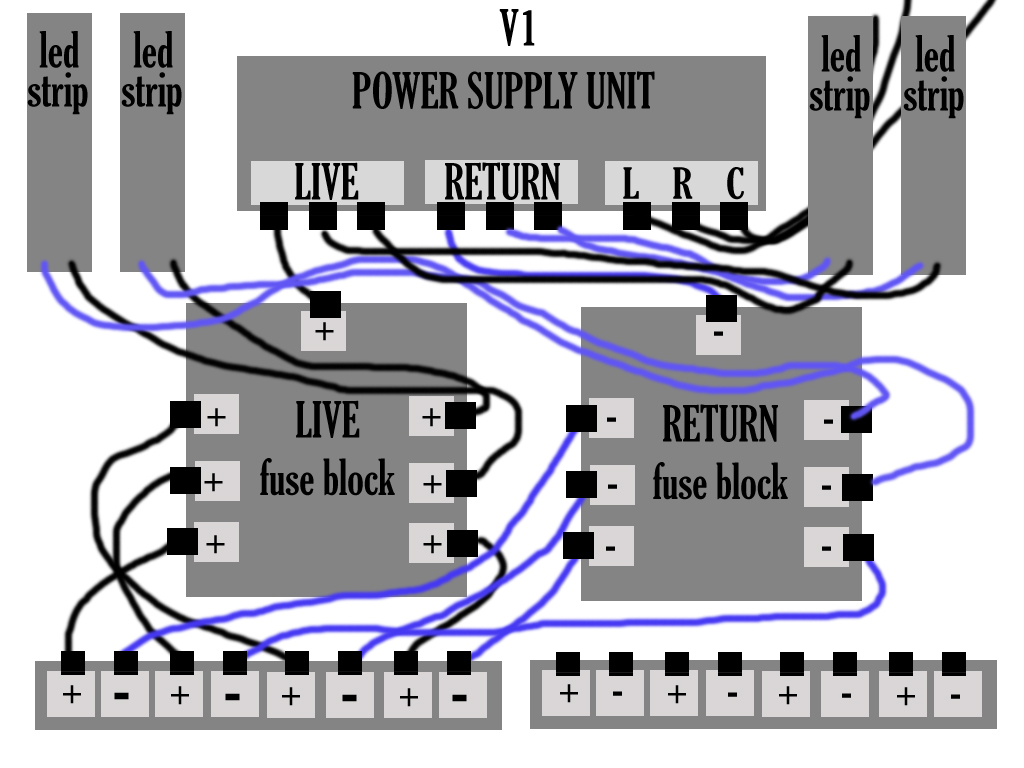 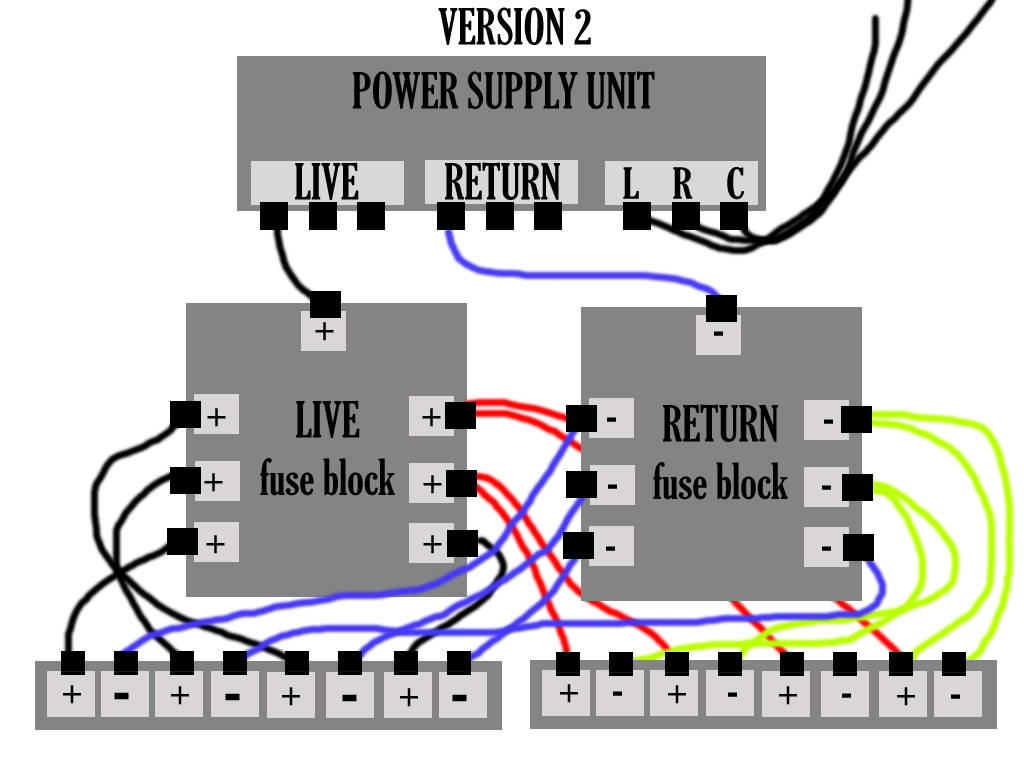 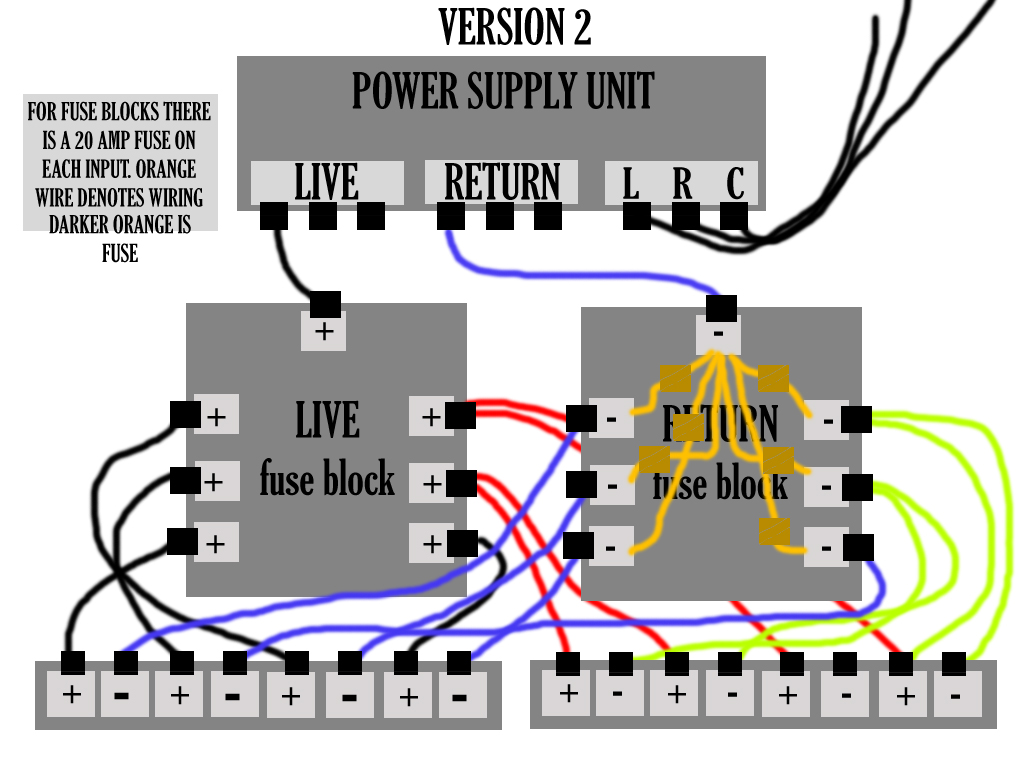 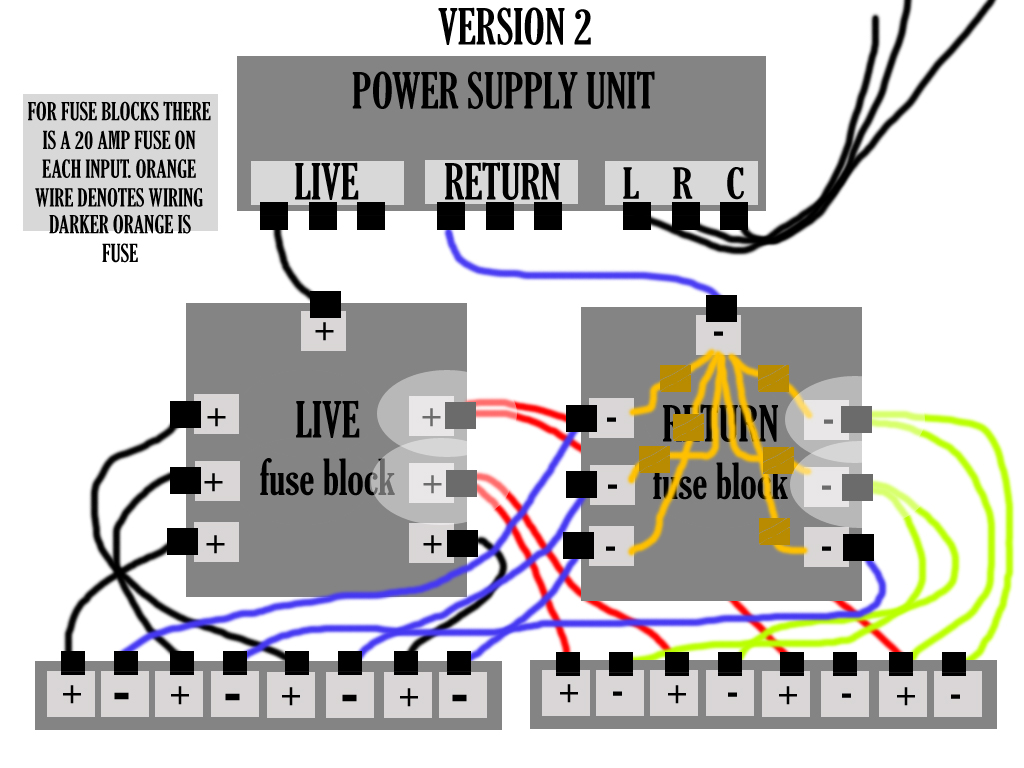 Now in my first picture supplied, not V2, my lights lit up efficiently and safely. I ran them for 24 hours and my wires never got hot. Yes I did overkill (way overkill) on purpose as my solder skills are above average, so no shorts.

Will my V2 work efficiently as the first one when I switch over with the "CONSOLIDATION" of wires with the added second BUS BLOCK, thus bringing the spare LEDs to a BUS BLOCK and freeing up other terminal posts? Now with this alteration, I have connected (2) sources to (1) terminal block that once had only (1) source.

My strips do not have a closed loop // the LIVE and RETURN are only fed at one end.

I'm basically confused about what I'm doing to my circuit. Will it perform properly? I am not interested in changing up my circuit completely, as I have made a bunch of custom wiring for it, but if I am completely lost, please let me know.

My math shows I'm at 96 percent at (V1) drawings, but when I make this alteration to the wiring and having two sources on on post, what does that do to my math?

Thank you for reading this and please let me know any material you have vested interests in, as I am always willing to buy a book and learn.

Your diagrams are a little confusing. The effort is appreciated, but the critical bit that's missing is how the fuse blocks are wired.

The only difference is the fuse position. From the perspective of the power supply (what you call "live") the fuse is either before the LED strip or after it. They are functionally the same. If current through the circuit increases beyond the fuse rating, it will open and interrupt the circuit.

I don't understand how the "fuse block" is meant to be wired. Typically a block of fuses will have slots for loading glass cartridge fuses, for example, but is not itself a distribution block. A typical fuse block might basically be:

On either side you would simply have screw/spade/spring terminals, binding posts, or whatever to attach the wires.

A terminal block as you have at the bottom of your diagrams, is commonly used to make connections between wires. But how the terminals connect to each other varies wildly. A "distribution block" would typically have several terminals connected electrically together, whereas a "terminal block" is just a more general term for these connectors.

For example, here's a terminal block where two wires can be connected to each other, but each set of two screws are isolated: 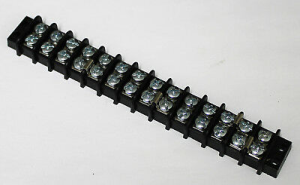 Compared to a distribution block (or bar), typically used to connect multiple grounds in a circuit breaker panel:

Since you seem to have multiple fuses and LED strips, I assume the intent is to have each strip protected by a fuse, but the entire installation powered from a single power supply.

That would connected as follows:

You will have to determine how your particular components are connected and compare them to this suggested schematic.

Usually WS281B (that's the controller datasheet) LEDs are loosely calculated based on 60mA per pixel (20mA per LED). With 120 pixels per strip that's 7.2A, which at 5V is 36W. This is quite a bit more than the 1.25A and 6.25W you used. (These are also commonly called "NeoPixels" due to the popularity of Adafruit's sales and support. I'm not affiliated.)

If two of these strips are combined into an "extrusion" as you mentioned, then each one will require 14.4A or 72W at most.

Four of these extrusions then, would require 288W, which is the figure you listed first with your PSU specifications. So I think your math is ultimately correct, even though the per-strip figures you list later are low.

A 300W PSU should be able to continuously supply its rated power, so in theory your project will operate just fine. You will want to check the PSU documentation to see what it is actually rated for (is it 300 watts, but only at a certain duty cycle, for example?). Consider, for example, the Meanwell LRS-350-5 power supply. It is a member of their "350 watt" power supply line, but if you look carefully at the specifications, the 5V variant is only good for 300W.

Generally I like to have a minimum of 20% headroom, so for this project I would recommend a supply that is genuinely rated for 350W PSU. (Perhaps a Meanwell SE-450 which is rated for 375W at 5V.) It will run cooler and longer and I would feel more confident about it. That said, if you are not expecting the LED strips to run at full white most of the time, you may be just fine.

Some final thoughts: 5 volts from the PSU out to the strips will inevitably have some voltage drops due to resistance. More noticeably from the first to the last LED in a given strip. Your large gauge wire will help cut down on that considerably (from PSU to strip), but if you measure the voltage at various points in your system, you may note that the lowest voltage is at the last LED in a strip (don't be surprised if it's only 4V). This is also why you may see some pink or red gradation in the strips from one end to the other when they are supposed to be at full white. To compensate, try to ensure that power is supplied to both ends of the strip and that power distribution wires are as short as possible. You may alternatively want to use smaller wattage power supplies closer to each strip.

Why Power LED Strips from Both Ends?

You expressed some confusion in a comment about providing power to both ends of an LED strip.

If you have a very long strip or very thin copper traces, you may see a noticeable voltage drop on the last LED (furthest from the supply). I did some quick calculations and I would agree that you probably don't need to power your strips from both ends. Just be aware that with long (4+ meter) strips, sometimes it is necessary to connect both ends to power to help avoid this issue. When in doubt, measure!

By having a fuse block on both the "live" and "return" sides (let's call them positive and negative, since we're working with DC), you effectively have:

This seems to only complicate your wiring. If you feel better having two fuses instead of one in the circuit, that is up to you. But my perspective is that you're simply adding additional points of failure unnecessarily.

You mentioned that you chose to power the LED strips from just one end to reduce the amount of wiring and soldering. I think that's perfectly acceptable given the manufacturer's note and the strip length (I assume they are 2 meters or less). You can completely eliminate one of the fuse blocks. For example, I would simply connect the negative terminals of the distribution blocks (or each LED strip) directly to the power supply. The fuse block on the positive side is sufficient.

Multiple Wires from a Terminal

Your last image shows how you've doubled the wires from the positive fuse block out to two terminals and you express concern about doing this. I presume you are running LED strips from each of these wires (one enclosure or "aluminum extrusion" on each wire).

The problem that this introduces is that one fuse is now inline with two strips in parallel. If a strip pulls 14.4A, then two in parallel pull 28.8A. (Current usage is additive when connecting loads in parallel.) This means a 20A fuse will blow when no problem actually exists; in other words, the fuse will be under-sized for the load.

A single fuse should be connected serially with the load it is protecting.

Not the answer you're looking for? Browse other questions tagged power-supply power ws2812b or ask your own question.