Since \$\tau=R C\$, we're basically finding the time it takes to get to 69% of \$\tau\$. The only thing I have figured out is that we are finding the \$T_{1/2}\$ value but I don't understand why. Why is this value used for astable multivibrators?

The time of one half-cycle of the classic two-transistor astable multivibrator is the time that it takes the base end of the capacitor to charge from –(VCC – (VBE + VCE(SAT))) to +VBE.

For example, at the moment right before the left-hand transistor switches on, the capacitor connected to its collector is charged to (nearly) VCC, with its left end positive. Note that the other end of the capacitor is held one diode drop above ground by the B-E junction of the other transistor. Now, immediately after the left-hand transistor switches on, it is now clamping the left end of that same capacitor to ground (actually, Vce(sat) above ground). Since the voltage across the capacitor can't change instantaneously, that means that the right end of it is initially driven to –VCC. This is the starting point of the exponential curve for this half of the timing cycle.

Now, keep in mind that the capacitor is charging "toward" +VCC, but it gets halted by the B-E junction of the transistor at +VBE. This charging is occuring at a rate determined by the time constant C × R, and we're basically interested in the time that it takes to move halfway from its starting value to its final value. This works out to –ln(0.5), or 0.693 times the R-C time constant.

For a more complete explanation of this circuit, see the Circuit Cellar "Engineering Quotient" column for issue 262 (April 2012).

For the monostable, the cap charges to 2/3 Vcc before discharging, so we're interested in the time it takes for a rising exponential with time constant RC to go from 0 to 2/3 Vcc:

Assuming this starts at V=0, t=0, we're looking for t at which

For the astable, the astable circ I have has two resistors, and the equation for period concerns both of them. The circuit charges through both resistors and discharges through one. The high time is the time to charge from 1/3Vcc to 2/3Vcc, and the low time is the time to discharge through that same span. You would derive similarly to the above, but if you post the diagram, I'll derive it for you.

But for astable mutivibrators they use constant current sources and switch between two voltage thresholds. The LS123 has a different formula than the 555 due to these differences for determining the rise time of a half cycle. Always consult specs on any chip you use.

Another astable method is to use a CMOS schmitt inverter with resistive feedback and a capacitor to ground. The thesholds are less accurately defined for this but it works by integrating between the stable hysteresis threshold points. Variance between parts and supply sensitivity is a weakness.

Yet another is a precision voltage source used as a current source and precise thesholds. There is no standard formula.

Ammar The magic formula appears to derive from the 1/3 rd supply range between dual thresholds. 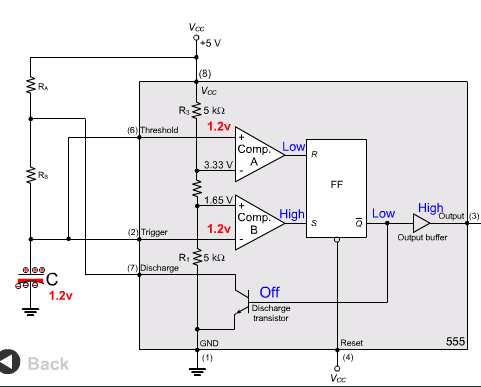 The product of resistance times capacitance is the time required for a capacitor that starts at voltage v to decay through a parallel-wired resistance to a voltage of v/e. The constant e (2.718) is used there for the same reasons that it is used as the base for the natural logarithm function.

In typical multivibrator circuits, the effective voltage across the resistor doesn't change by a factor of e, but changes by other amounts. In a typical 555 oscillator, the "rising voltage" part of the cycle will start with the capacitor charged to 1/3VDD (meaning the charging resistor will see 2/3VDD across it), and will last until voltage reaches 2/3VDD (meaning the charging resistor sees 1/3VDD). That's dropping by a factor of two, and the natural log of 2 is 0.693 (does that number seem familiar).

Note that different circuits use different starting and ending voltages, and so their ratios may vary. If in a 555 circuit the capacitor started totally discharged, the charging resistor would start with VDD rather than 2/3VDD across it, meaning the voltage across the resistor would have to drop by a factor of three, whose natural log is 1.0986 (a scaling factor that appears in some other 555 circuits). If you see weird "time-scaling" values in RC circuits, try taking their inverse logarithms; in many cases, one will find that they yield sensible-looking numbers or fractions.

Scott (above) is half way there.For the monostable, the capacitor charges up from 0 V to 0.67 x Vcc, the Threshold input transition level, which is greater than the voltage at one time constant, 0.63 x Vcc.

For the astable, the capacitor charges up and down between 0.33 x Vcc and 0.67 x Vcc. Because the capacitor never discharges all the say down to 0 V, obviously the oscillation half-cycles will be shorter than a monostable period with the same timing component values. You can use the equations in Scott's answer to calculate the times it takes for the two half-cycles and subtract them. Note that with the 555, the two half cycles can have two different resistance with the same capacitor. The equations in the datasheet show this.

Not the answer you're looking for? Browse other questions tagged transistors 555 time or ask your own question.

1
Invert a 555 Astable Output Signal
2
Monostable and Astable 555 Timer
2
How does this TLC556 work?
0
Shift register led display not working?
1
Mono and Astable multivibrators not working when connected together
2
Using transistors to control a 555 timer in astable configuration
3
4 way traffic light using 555 timer
1
Astable multivibrator frequency mismatch
3
555 monostable configuration: why shorting a charged capacitor is not a concern?