Extracting speaker, microphone and hook signals from a two-line telephone

I'd like to use a 'normal' telephone as an audio and switch interface for a project. I want to design a circuit that has the telephone A and B wires on one side (ie. an RJ-11 socket) and has four connections for my other work on the other:

I've been reading some old usenet posts but my electronics engineering days are a long way in my past, I can't quite decipher what I should be building. Can anyone help?

I've put a representative schematic below. 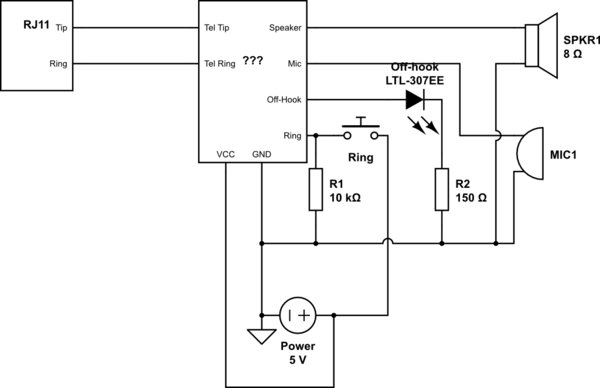 What I think I know

I still need to digest this inverter circuit, but I can probably figure out the components I'd need for the above (though I'd probably have difficulty isolating it properly)

I don't know if I need to generate the 50V base voltage that a telephone network usually provides — I imagine this requirement will come from being able to detect if the phone is off the hook or not.

Where I need your help:

Does anyone have any advice?

It looks like you will need to hold the speaker on your ear because its power amplifier is missing. Then the hybrid matching to the phone line will not be perfect so you will have a noise into the mic will come out the speaker and the mic will pick it up and the sound will go around and around as acoustical feedback howling. Very old speakerphones used a push-to-talk pushbutton that disconnected the speaker when you talk and disconnected the mic when you listen. The old and modern mics need to be DC powered.

OK; the hybrid circuit looks cheezy, but if Instructables says it'll work, what could go wrong?* If you somehow think that Instructables may not be the best and most reliable source of information on the internet, search on "POTS hybrid circuit" or some such, and engage your BS filter.

You need to power the phone -- when you detect off-hook by detecting current, you're detecting the current used to power the phone. You can get by with 12V through a 600 ohm resistor, 24 is better. 48V is excessive -- the central office supply is 48V, but it's designed to work through miles of wire. It was quite common back in the day for small PBXs to use 24V to the phones.

I would disconnect the transformer from the line when you're pumping your 75VAC into it. I might, if I knew the thing were going to get used more than once, experiment with a protection circuit for the audio bits -- but a simple relay circuit takes very little design time, and Just Works (TM).

Note that a lot of cheap electronic phones will ring if you just chop the 12V supply to them at 25Hz -- old mechanical ringers need lots of power, but new phones don't. If you're running a Western Electric model 500 phone, then yes -- give it a 75VAC sinusoid (or at least 75V RMS at 25Hz). While you're at it, if it's an old mechanical ringer make sure you give it enough current -- those things want lots of power (comparatively).

* Yes, my tone of voice was sarcastic there.

Not the answer you're looking for? Browse other questions tagged telephone or ask your own question.

0
Connect IPOD audio output to old rotary telephone
3
Phone line to 3.5mm audio line
13
Control the hardware of an old phone using a Raspberry PI
1
How would you increase voltage to drive an LED yet also keep it limited?
1
How to make a home intercom system with two corded phones powered by house current
1
How does this telephone circuit modulate the current?
2
How does this old telephone ringer work?
3
Analog (POTS) telephone off-hook detection
8
Make old telephone ring