Why does a square wave in frequency domain have less amplitude?

For a square wave in time domain to frequency domain, the amplitude decreases, as shown in the spectrum image below.

Great explanations will help me a lot. 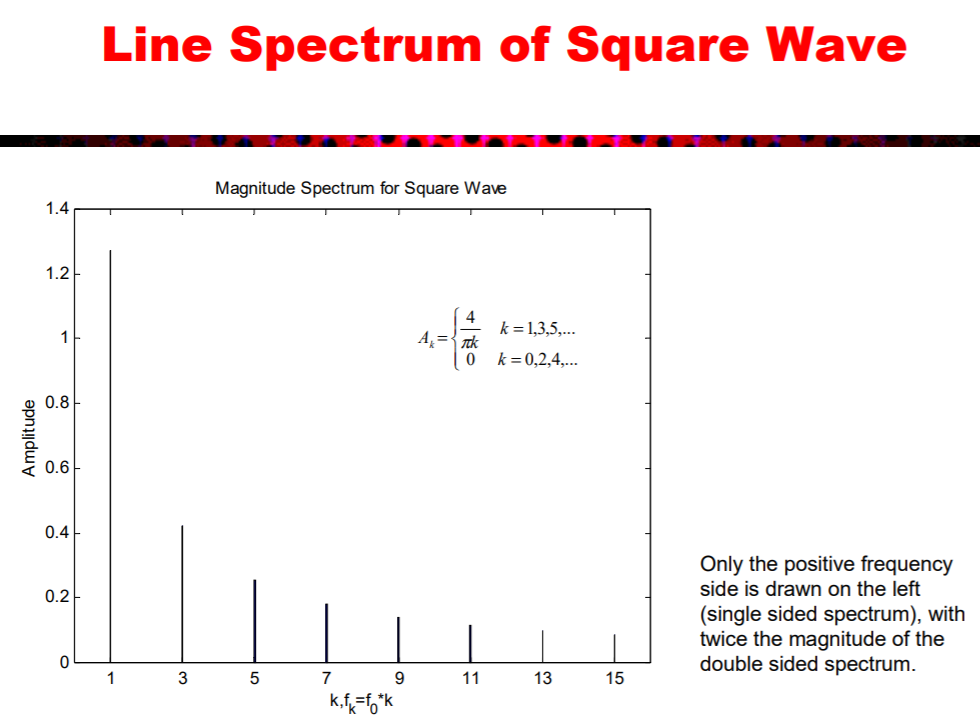 Any repeating waveform can be constructed from a series of sines of integer multiples of the fundemental frequency of the waveform. These are the harmonics. Using Fourier expansion with cycle frequency f over time t, an ideal square wave with an amplitude of 1 can be represented as an infinite sum of sinusoidal waves of odd harmonics of the fundemental.

This is represented graphically in the animation below.

Figure 1. This fabulous illustration of the Fourier Transform by Lucas V. Barbosa on Wikipedia's Fourier transform page shows the transformation of a periodic waveform from the time domain to the frequency domain. The frequency plot shows the relative strength of the harmonics with clarity that could not be obtained from staring at the time plot.

Look at this animation. You will see why the reduction in the amplitude of each harmonic is required. Also look at the impact of even harmonics on the shape of the signal.

There are numerous websites and video animations that demonstrate this concept, for example:

What is a Fourier Series? (Explained by drawing circles) - Smarter Every Day 205

You wrote "In frequency domain the amplitude decreases"

That "decreases" obviously means that in the left in your spectrum diagram the peaks are higher and in the right they are lower.

But the spectrum diagram doesn't present any evolution during the time, it simply states that there's a set of continuous sine voltages which have always existed and will stay unchanged from now to eternity.

Just the square wave happens to be a sum of continuous infinitely long lasting sinewaves with coarsely the following amplitude rule: The higher the frequency, the lower the amplitude". But that's the comparison of the simultaneous amplitudes, not something which decreases along the time.

The spectrum is a receipe which shows how arbitary signals can be theoretically constructed by summing continuous sinewaves. The summing means the same as connecting in series sinusoidal voltage sources like in the next image: 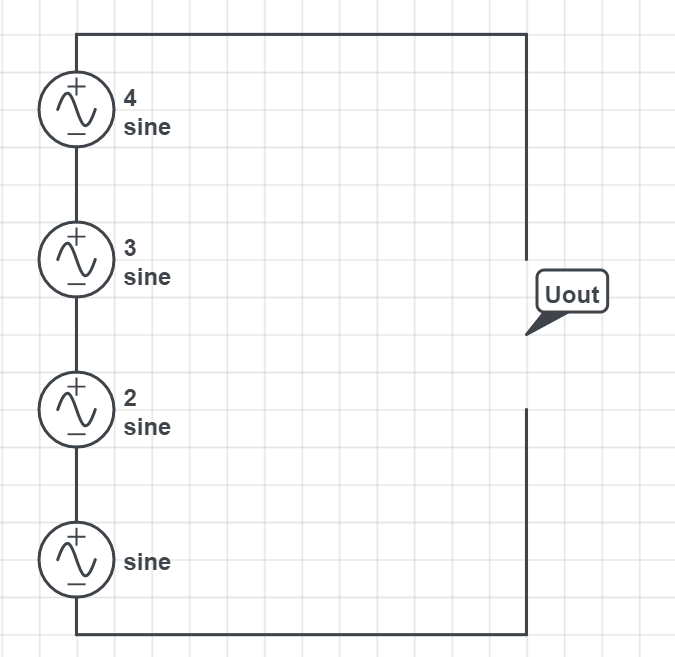 Here are only 4 sinewaves (=frequency components) and the set of possible waveforms is limited. To generate an arbitary waveform infinite number of sinewaves is a must, but with reduced accuracy a finite, even a practical number is enough as MP3 music files and JPG photos literally prove.

BTW. If infinite number of quantities are summed and the result is something solid and finite, the only possibility for this is that the summed quantities, when ordered to any order and indexed, the quantities finally get smaller as the index grows. Think for ex number 1/9. As decimal it's 0,1111... The spectrum of the ideal squarewave contains infinite number of components. When ordered by growing frequency the general level must be smaller as the frequency grows.

The FFT is a correlation, from N=1 to some larger number.

The math that computes the amplitude uses a 1/N coefficient.

Not the answer you're looking for? Browse other questions tagged frequency-response or ask your own question.