Why are modern telephone lightning arrestors less prone to (rectification) RFI problems than old ones?

I was reading about telephone lightning arrestors in my ARRL RFI Book (first edition, copyright 1998), in chapter 9 "Telephone RFI" (by Pete Krieger, previously WA8KZH, now K8COM) and on page 9.6, the following is stated (emphasis mine):

Telephone service enters a house at a grounded, fused lightning arrestor located outside at the house end of the telephone company drop. Years of exposure to weather or moisture can cause corrosion or discoloration (onset of corrosion) of wires, junction boxes or components inside the lightning protector housing. If the arrestor is accessible, a good visual inspection may reveal potential problems. Lightning arrestors, especially those that have done their job a few times, can become nonlinear, acting like a diode, rectifying any RF energy present on the phone lines (just like the crystal radios many hams built in their early years). If you discover that a lightning arrestor is creating RFI, the fact that it's rectifying RF is one indication that it needed to be replaced anyway! Modern arrestors are less prone to RFI problems than older ones.

Just a few notes about this quote... This is the entire (small) section, so this is likely all the information that I have behind my question. Also, the context does indicate that the lightning arrestor is standard telephone service equipment, and therefore part of a standard land-line telephone installation; therefore, this question may be limited to only standard telephone company equipment. Quite possibly, it may be a broader generalization -- I just don't know.

So, it's that last sentence that piqued my interest. Why, exactly, are modern lightning arrestors less prone to RFI problems? Is it more even "wearing" so it doesn't become a diode? Is it a better design, so it lasts longer and fails more gracefully?

I emphasized the "diode" aspects of the quote from the book a little more in preparation for making the following request:

I would like to argue that for me to accept an answer, your answer has to show either how semiconducting happened more frequently with the old style, or alternately show how semiconducting happens less frequently with the new style. This is because I can't really decide between the two really great answers already given. How did a lightning hit (or moisture, or time) cause carbon blocks (the old style) to semiconduct?

The carbon block becomes exactly like a high power TRIAC (with a trigger voltage (<250V), when sufficient voltage and time duration for ionization exists.

There is an incremental negative resistance when triggered (avalanche effect) and is inversely proportional to the current.

Line inductance limits the Re-radiated EMI as it spews an impulse of low current yet widespread on the Telco line. The Broadband EMI is approx. L/-ESR = omega -3dB in a radial direction along to the CO. (Central office)

This parallel gap is closer to 3K/mm vs. a sharp edge or point =< 1kV/min dry air. This BVD threshold also degrades with air quality and higher humidity and surface contamination from sputtered carbon.

Using @Mike’s data 0.076 mm = 76V for 1kV/mm and 228 V @ 3kV/mm when new for the -48 to -54V telco DC voltage. thus to me is a good design value for an arrestor and also for a TVS but for an exposed carbon gap not so reliable long term. The relaxation pulses might not occur when the phone is off-hook low impedance but only when high impedance so the capacitance charge can build up from ingress of lightning, then partial discharge egress on the phone lines picked up by AM and HAM radios in addition to real lightning EMI hundreds of miles away which would be much stronger when close and weak far away. (Friis Loss)

If corona discharge on wet powerline bushing is say 100kV triggers the creapage moisture and dust at lower levels, so that when you walk near HV power lines and transformers, you may hear these in the morning with dew, like snap crackle pop which are harmless surface Partial Discharges (PD) But when sufficient dirt accumulates, it can lead to a failure just like carbon gap arrestors if not self cleaning from rain. I have heard HVAC lines crackle overhead in golf courses and back lanes of apartments. when they monitor this with circuits and determine a HVDC or HVAC line is at risk, they then fly helicopters and techs in faraday cage suits to spray clean the insulator bushings.

A lighting arrestor diverts the high voltage lighting strike to ground instead of allowing the voltage to pass through to your radio equipment.

Some are simply devices that are basically spark plugs. High voltage jumps across the electrodes and goes to ground while low voltage does not. Others consist of gas-filled tubes that ionize at high voltage and conduct while remaining inert and non conductive at lower voltages. Many today are solid state devices such as a series of MOVs.

After taking a lighting hit, the electrodes can be damaged or melted. The gas may heat up, expand, and create a leak due to the pressure. The junctions in the solid state devices may be damaged.

You can argue that the most dangerous failure is that they no longer send high voltage to ground, but there certainly are failure modes that can cause them to have high impedance, blocking RF, and in some cases rectifying it like a diode as they conduct part of the waveform to ground.

Many advise replacing the lighting arrestor after each lightning hit. Some also have an estimated life after which they should be replaced.

I don't know if I agree with a blanket statement that new lighting arrestor designs are better than older designs, but I would agree that a new manufactured arrestor is going to be better than one that has been in use for many years.

This is what an older telephone line lightning arrestor looks like.
Modern sealed metal-oxide varistors (MOVs) have replaced these, as they are a superior and more reliable design.

The protective cover at the top has been removed, exposing the two carbon blocks separated by a brass strip (which I believe to be either a varistor or a carbon block spark gap). Probably, the brass strip is connected to a ground rod, and the outer contacts on each block are respectively connected to each wire.

Those blocks may not be pure carbon, and I don't know what the two red cylinders are.

The one in my parents' former home had a porcelain base instead of a Bakelite base. At some point, I watched a Bell System repairman unscrew the varistor cover and screwed in what appeared to be a slide hammer, which he pumped up-and-down for several seconds. To this day, I don't know why he did that. 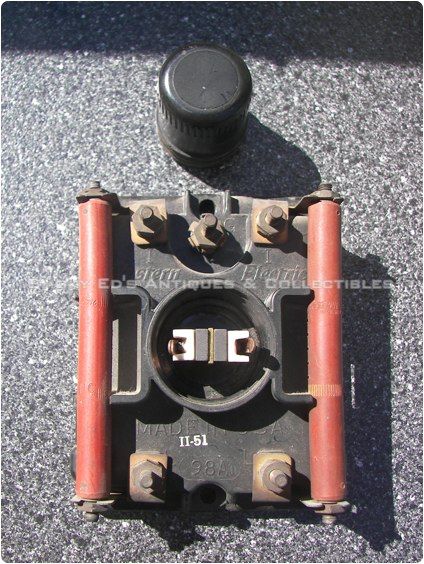 A spark gap is one of the oldest protective electrical technologies still found in telephone circuits, having been developed in the nineteenth century. A carbon rod electrode is held with an insulator at a specific distance from a second electrode. The gap dimension determines the voltage at which a spark will jump between the two parts and short to ground. The typical spacing for telephone applications in North America is 0.076 mm (0.003 inches). Carbon block suppressors are similar to gas arrestors (GDTs) but with the two electrodes exposed to the air, so their behavior is affected by the surrounding atmosphere, especially the humidity. Since their operation produces an open spark, these devices should never be installed where an explosive atmosphere may develop.

The carbon block units, with less than 0.1mm spacing between carbon blocks and a metallic earth electrode, could have caused interference from local AM broadcasts had the gap been bridged by metal deposits caused by arcing over a period of time. In other words, they could have worked as 'razor blade/pencil lead' foxhole radio detectors.

'Improved' gas discharge units may have also contributed to the problem. The 'improved' units had a construction similar to fluorescent tube light starters. Heat from a sustained gas discharge would sufficiently deform a bimetal strip to short circuit the tube electrodes and quench the discharge. The strip would recover its shape on cooling. Failure to recover could have caused improper metallic contact between the electrodes to form a rectifying junction.

Though metal oxide varistors are high voltage semiconductor devices, they exhibit characteristics of back-to-back series-connected Zener diodes and would not cause interference from local AM broadcasts.

Not the answer you're looking for? Browse other questions tagged diodes telephone surge-protection history lightning or ask your own question.

0
Why are telephone/internet lines less susceptible to surges than power lines?