The Source is connected to 5 V and the Gate is pulled up to 5 V through the 1 kΩ resistor. Drain is connected to the anodes of 16 LEDs in parallel and the gate to the 74HC595. Now my observation on a logic analyzer (as well as on an oscilloscope):

The red channel is just the constant 5 V supply at the source. The brown channel is the switching signal coming from the 74HC595 and the black channel the voltage at the drain. Isn't the MOSFET supposed to shut off immediately after the gate gets pulled high again? The turn off delay is described as about 80 ns which is clearly passed on the output of the logic analyzer. Is this the expected behavior or am I doing something wrong here? Since the TLC5940 can only sink current on the cathodes of the LEDs I could not get around high side switching, but I was under the impression that this circuit should work...

After finally having some time, I recreated a simpler version of the circuit and tested it on a prototyping board with an Arduino to isolate the problem. This is my schematic, the unconnected nets connect to the control pins from the Arduino: 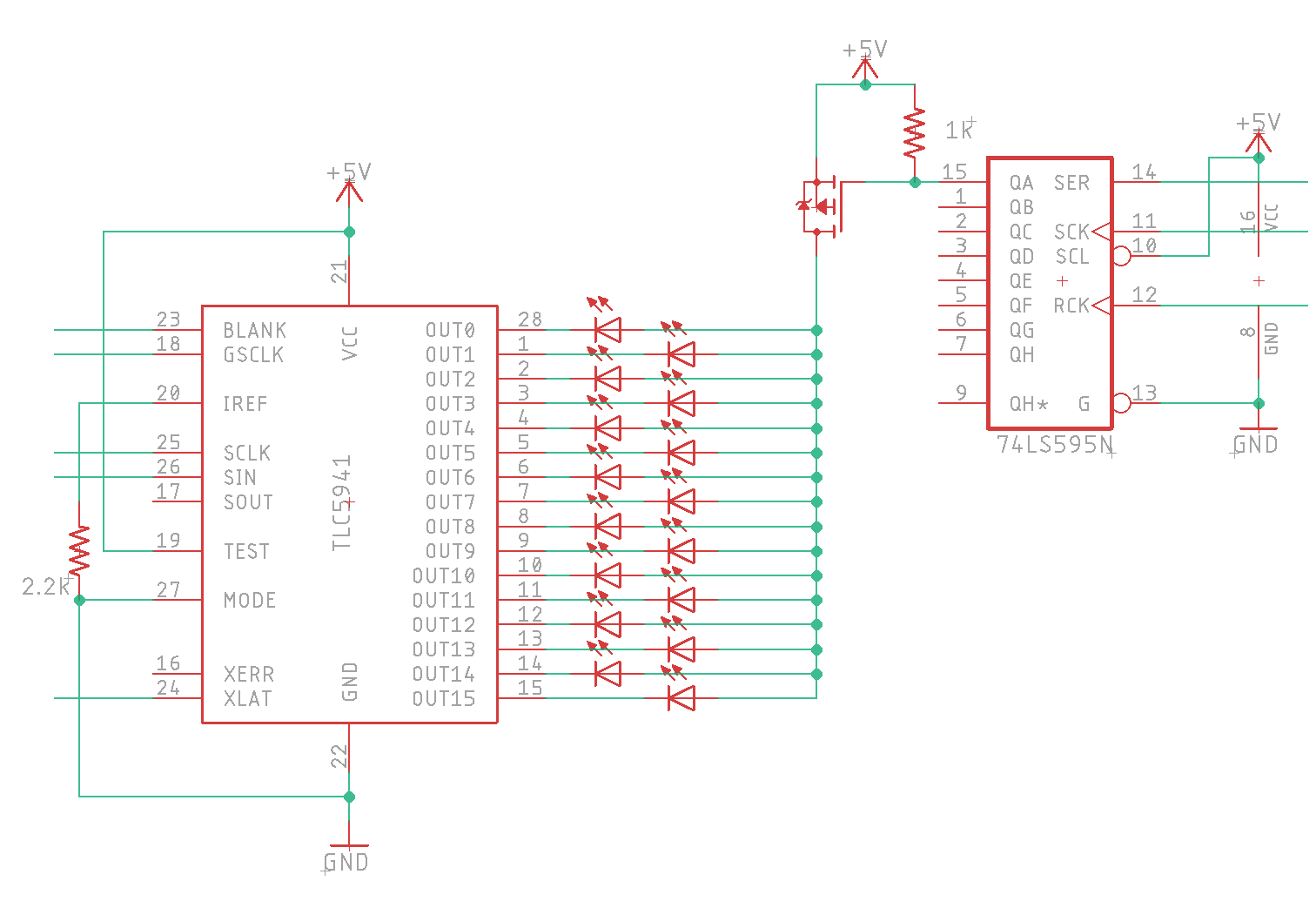 As p-channel MOSFETs I tried both, the FQP27P06 and the IRF9540N which both have similar specs. My readings were in both cases almost the same:

We see that the MOSFET is only supposed to conduct for 0.27ms according to the gate reading but it remains for another 0.86 ms which really causes harm to my application when all 9 led rows are connected in the end. It caused trouble, because one column with all 16 LEDs lit was drawing 320mA. With this behavior on all the MOSFETs though and all LEDs activated in my matrix, 3-4 MOSFETs were conducting at the same time which at least tripled the current draw and since my board was not specced for this the voltage was braking down and the MCU ended up halting. Also my package of the TLC5940 was not rated for the amount of heat dissipation and it occasionally went into the temperature error mode. Anyone having an idea why this problem might occur? Every answer is greatly appreciated!

Try adding pull-down resistors to the drain pins of the MOSFETs. The waveforms you are showing are classic capacitive discharge curves caused by high-impedance loads.

Since your FET Source pins are at 5 Vdc, try 1k resistors from the drains to Ground.

You've misunderstood something crucial and it's not about your circuit, it's about your reading of the datasheet. IRF9540 says:

It's clear now that the Fall Time "promised" is in fact 51ns. But you need to pay attention to the conditions:

This means that the "promised" Fall Time is not going to be 51ns, or at least not with your 5v supply. This is the root of the problem.

If you don't believe me yet then check the following, I made some tests: 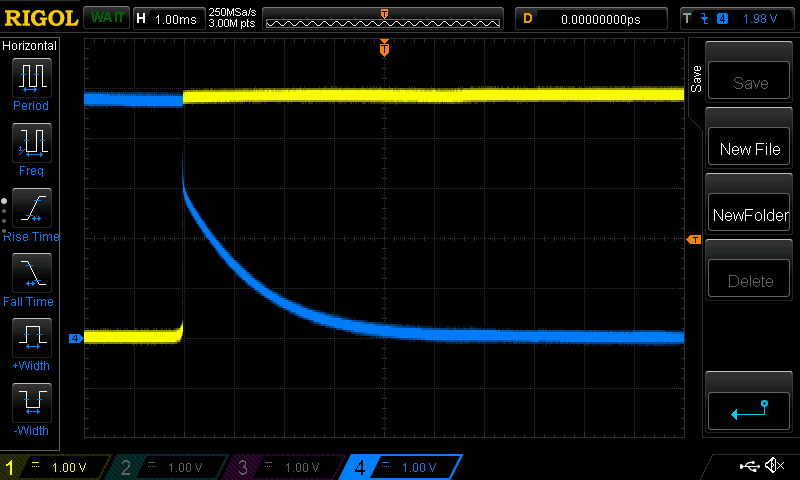 This is the response of the circuit with VDD = 5v. The resulting Fall Time is 4ms! 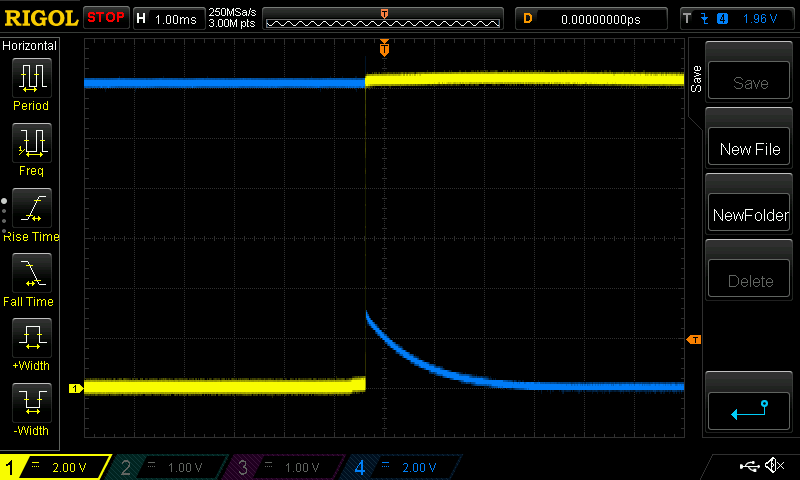 This is the response of the circuit with VDD = 12v. Here the resulting Fall Time is 2.5ms. It's less in fact because we're getting closer to the test values (e.g. VDD=50v).

I would like to test this with VDD = 50v but I don't have the tools right now.

Read the datasheet and be careful next time! They promise some things but you should read between lines.

You tried multiple MOSFETS and got the same result, so that seems unlikely. But you can do some tests to nail it down and point toward the real culprit:

You know if you work towards having a switch connected to a single LED/resistor combination, it has to work somewhere on that path. So the idea is to work your way toward that and identify what is failing. Maybe your circuit board has a flaw and is giving you some sort of coupling to the drain terminal, in which case even the switch powering an LED/resistor combination might show that behavior!

Wow. Lots of red herring answers to this question. This is a simple problem with a simple answer.

The MOSFET isn't turning off too slowly.

Those waveforms are measuring the voltage relative to ground, specifically the voltage at the MOSFET's drain.

LEDs are still diodes. They have intrinsic capacitance and a non-linear voltage drop. And MOSFETs do, in fact, have capacitances. One of interested here is the output capacitance, which is effectively a capacitor across the drain and source. It must discharge through these diodes, and that discharge will become exponentially slower (exactly like we see in the plots of the voltage). So of course the voltage at the drain decays slowly. You're just looking at the expected voltage decay curve for the output capacitance of the MOSFET being forced to discharge through the sub threshold leakage of the diodes. The capacitance is in hundreds of picofarads, but this discharge current is on the order of nano amps. Whenever the drive voltage is close to the voltage drop of the diodes, this becomes a lot more noticeable, where at higher voltages, it is less so as the decay doesn't slow down until a bit below the voltage drop of the diodes. But it is still there, just less visible on a graph. I would point out that with a drive voltage of 5V, and lest we forget that there is at least an additional 0.6-1.2V drop due to the low side driver chip (which is not using MOSFETs internally, but bipolar transistors) on top of the possibly 3V-3.4V drop for the LEDs... that's not much headroom. Such a decay would be that much more noticeable.

And I can prove it. If you place a load resistor in parallel with the diodes to ground, maybe 10K, you should see the voltage decay much more rapidly as now it has a linear resistive path to discharge through and not the exponential behavior of PN junctions.

My point is that the MOSFET is turning off. The voltage decay is both normal, expected, and unrelated to the other problems he's having. It is easily as well. Measure the current. Measure the current in series with the drain or source of the MOSFET. Measuring the voltage at the drain is not a correct way to determine turnoff in this circuit. Measuring current is the correct way to determine if the MOSFET is turning off or not. And I am sure it is turning off as fast as one would expect.

And, of course, if the MOSFET was truly turning off as slowly as the voltage is decaying at the measured node, then why can we see these: 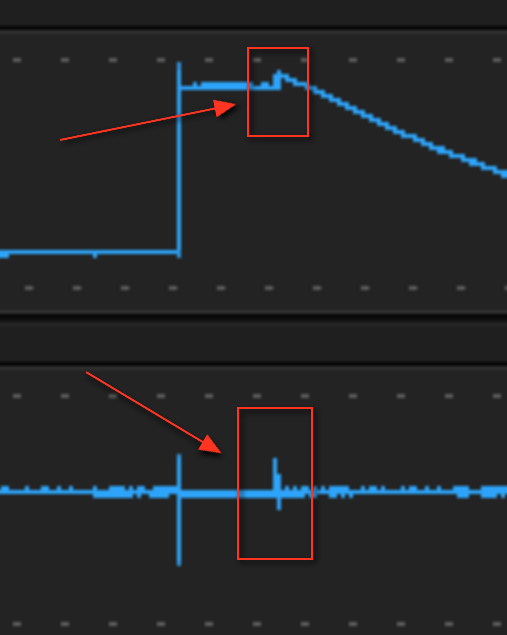 Voltage regulators don't spike their output voltage like that if the load is decaying like the voltage measured. The only way we'd see a sudden spike on the power supply voltage like that is if the regulator experienced a sudden load step from heavy current draw to almost no current draw. It can't react instantaneously, so there is a brief period where the voltage goes out of regulation, specifically by being higher than it is supposed to be, before it can get the output back into regulation. This requires a large, fast load step.

There is such a load step in the voltage rail, which means the MOSFET is, indeed, turning off and slightly faster than that voltage spike on the power rails occurs.

Measure the current. You'll see that the current falls as quickly as you'd expect.

Cin gate around 1400 pF depending on your conditions.
Rpullup 1 kΩ

You are seeing a much longer gate turnoff time that that. Are you sure the 1 kΩ is not a 100 kΩ or so?

Failing that, it makes no great sense.
Look for something nonsensical :-)

... as you can see in the brown channel of the logic analyzer, the gate voltage behaves as expected. Its the Drain voltage that gives me this weird behavior. I also verified the resistance and tested with a range of other resistors (1k, 10k, 100k...)...same behavior.

Is there an unused select or address line on the HC595 floating when it should be strapped high or low? That would explain behaviour like this - or also random behaviour in other cases.

Here the floating line can follow some source (select line or ...) via leakage (in IC or external) with a long time constant due to pin capacitance and v high leakage resistance or bias current.

This is a very common class of behaviour with a floating pin.

A couple of thoughts.

Using a lower LED voltage on its own rail will reduce power dissipation in the TLC current-source driver. And because, by nature, the LED transient currents are high, it doesn't hurt to isolate them on their own supply. And... less charge to bleed off when it comes time to blank the row.

Now, on to the problem you're seeing.

tl; dr: your LEDs are ghosting. You could get an exorcist, or... you need to pull down the anodes during the dead time.

When the columm high-side FET is off, the LED current goes to almost zero. That's fine, but there is still leftover charge on the LED anodes, the traces, and the P-FET drain. Yes, those LEDs become capacitors.

What happens when the FET turns off is then:

So any remaining charge bleeds off s-l-o-w-l-y through the sub-Vf biased LEDs, having nowhere else to go. This means that those LEDs are still very close to being 'on', even if just a little bit, during this sub-Vf threshold decay time.

And guess what? If the cathode voltage gets jacked up by activating another column, this couples to the 'off' column through their LED sub-Vf capacitance. And in the process, pushes the off-column anode voltage back above Vf, lighting the LEDs in the 'off' column.

That's ghosting, in a (nut) shell.

How to fix it?

Add an N-FET to each columm to bring the anode voltage low, forcefully, when that columm is off. The N-side pulldown will discharge that leftover voltage much faster than a pulldown resistor can do it. Not only does this fix ghosting, but it allows you to shorten blanking time considerably.

I notice that each mosfet's gate low time is 0.27ms. Well, 0.27ms x 9 = 2.45ms but your cycle time is 4.5ms. Are you doing 2ms of processing inbetween each cycle around the strings when the display isn't being driven?

A usual way of driving an LED display is under interrupt control. Have a timer driven interrupt and each time the interrupt sub routine is executed the currently lit string is switched off and the next one switched on. Then there is no dead time during other processing.

You could make the display interrupt driven and if the problem is caused by the FET's switchoff time you could drive the display at a lower frequency (you shouldn't see any flicker at 80Hz). Then you can add 0.8ms "all gates high" dead time inbetween a string being switched off and the next one being switched on.

Not the answer you're looking for? Browse other questions tagged microcontroller led mosfet switching led-matrix or ask your own question.