Why does current only choose path of least resistance sometimes

Say we have the following setup 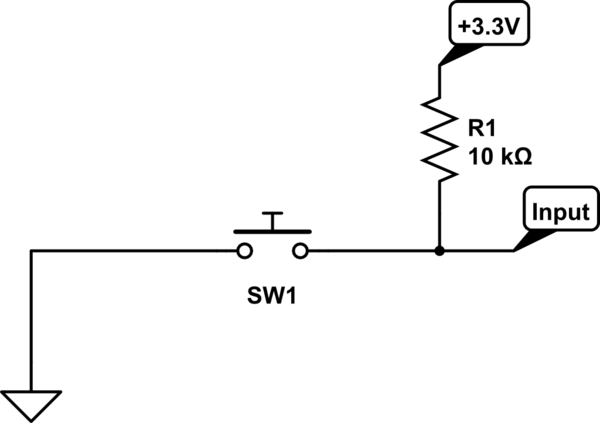 Input is pulled high and current flows through it as long as the switch is open. As soon as it closes current switches to the path of least resistance and goes through the switch to ground.

Imagine a similar setup with two paths with different resistances

In this case current will flow through both paths, and will not simply go through the path of least resistance.

'Path of Least Resistance' is a phrase that only really applies where you have alternative paths for, for instance, a walker who chooses to go through a gap in the wall next to the gate, rather than open the gate. Wikipedia says this:

In physics, the "path of least resistance" is a heuristic from folk physics that can sometimes, in very simple situations, describe approximately what happens.

In electronics, the current always divides between several paths in the inverse ratio of their resistances (or impedances if it's AC).

In your first example, the switch when closed has orders of magnitude less resistance than the input. The current division ratio will be so close to 100% to the switch, that we engineers approximate it to 'all through the switch'.

In your second example, it's a reasonable ratio.

Note that the input current doesn't 'divide' as such, looking at all the paths and deciding how to split. The node where the paths split from has a specific voltage V. Current flows through each path I=V/R, V is the same for each path, hence the current is in the inverse ratio of resistances. The input current to that node is then the sum of all the output currents.

Looking at the comments about water channels, and thinking about the origins of the phrase, it's also often used for lightning. Who hasn't been told, when perhaps visiting a tower with a 'lightning conductor' fixed to the outside, that it takes the path of least resistance. Just like water eroding its own channel, ionisation in the air creates its own low resistance channel. This happens to such a degree that lightning may well not strike the most obvious high point in the local area, but proceed by ionisation steps to create an alternative low resistance path to ground through which the main strike then occurs.

Why does current only choose path of least resistance sometimes

It doesn't, it travels all paths inversely proportionally to the resistance of the path.

Input is pulled high and current flows through it as long as the switch is open. As soon as it closes current switches to the path of least resistance and goes through the switch to ground.

In your first example, when the switch is open:

When the switch closes:

Conductance is a unit you never think of, even though you almost work with it all the time.

The unit is the siemens. Yeah, like the service equipment. (Some people call it the "mho", but I think those people work for Square D :)

"Path of least resistance" is wrong. It's used by business managers and motivational speakers because it's nicer to say than "I don't have to outrun the bear". The actual rule is

Current flows on all paths simultaneously, in proportion to their conductivity

Pardon the graphic. The schematic editor won't support this.

Current splits 10:1 down those two paths.

Easy peasy, when you think in conductance!

In the first case, when you close the switch you are connecting vin directly to ground. If you had Vin coming through some other circuit, you would notice a current coming through that element too . In your circuit when the switch is open , depending on Vin the current might flow through the resistor ( Say if Vin is 3.3v and the switch is open no current is going to flow ). Current will flow through all resistors which have a potential difference across them. If Resistance is small current is going to be more through it ( which is the case of the second schematic).

Not the answer you're looking for? Browse other questions tagged voltage current resistance ohms-law or ask your own question.

22
Why does water short out PCBs? (i.e. Why doesn't electricity follow the path of least resistance?)

0
Relay resistance
7
Will the short circuit damage electronic components or just the supply?
0
The path of least resistance
0
Why doesn't all current flow to ground but instead splits into 2 paths (as shown in the schematic)?
2
Why does not current flow in open circuit wire connected to a closed circuit?
0
How to find current of different parallel components in SR Latch
1
Is my understanding of current, voltage, and resistance correct?
1
Path of current and equivalent resistance