Why is it called Wired-OR when it is functioning as Wired-NOR?

When at least one of the inputs is HIGH the output is LOW.
This is clearly NOR. Then why everyone calls it Wired-OR? 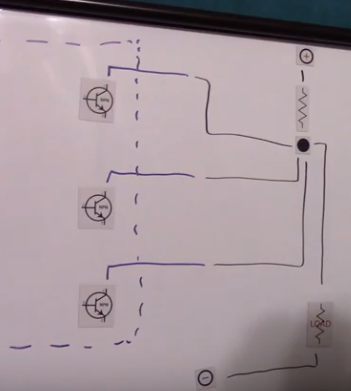 This is a historic convention.

The preferred active level in many 5V TTL circuits was low as the noise immunity at the input was higher (3V as opposed to 0.8V in the low state). This is the reason we still see pin definitions such as \$ \overline {CS}\$ and \$ \overline {OE}\$ on many parts even though the circuits are not often old TTL; this is simply a convention that has been used for decades.

Noise immunity is the difference between a guaranteed input level recognised as a high or a low (0.8V for a low, 2V for a high in TTL) and the power rail (0V on the low side and 5V on the high side for classic TTL). Therefore the noise immunity of a gate is 0.8V in the low state and 3V in the high state assuming a perfect (5V or 0V) input.

The use of active low is to keep an input in the idle (high state) for as long as possible and only become true for shorter times. That doesn't always work, of course, but the principle is sound.

If we consider an output low to be true (in assertion level notation) and an input level of high to be true, then any true input (high) will yield an output true (low).

From this perspective, it is indeed an OR gate.

Other answers are kind of correct, but they aren't going back far enough historically.

A "wired-OR" assumes an SPST relay with a normally-open contact. Using an SPDT (changeover) relay, the normally-closed contact can be used to create a "wired-NOR" gate, and from there (via De Morgan's theorem) you have access to any digital logic you need. The convention is to refer to this logic system as "wired-OR" though because that is the simplest possible gate.

With transistors, as you say, a wired-NOR is the simplest possible gate. However the naming convention from relay logic took some time to die away, and in some circles it never really did. Most people don't know the origin, but the naming convention lives on. It relates to that technique of creating a gate with (relatively) direct connections between inputs, not always specifically to the gate created. I should note too (picking up from AnalogKid's answer) that you can also create wired-OR and wired-AND gates using diodes.

why everyone calls it Wired-OR?

Not everyone does, and the ones that do are wrong.

This isn't a question of writing style; an OR gate and a NOR gate are not the same function. You cannot use the two symbols equivalently on a schematic, and doing it in text is the same level of critical error.

I use all four wire-X terms where appropriate for a clear, unambiguous description of the logical effect being discussed. Extending the SI conventions for technical writing, the "W" should not be capitalized. Personally, I prefer wire-X over wired-X.

Wire-AND and wire-OR can be achieved with diodes and a resistor, while wire-NAND and wire-NOR require inverting stages on either the inputs or output. For example:

This is an alternative representation of that wired-Nor using a single transistor. 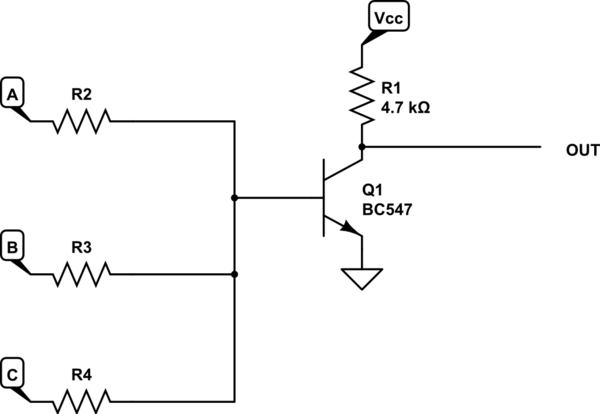 I'm not sure why you think the above schematic is a "wired OR". I would call it an open collector line. 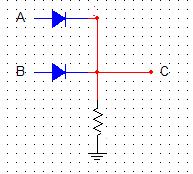 Not the answer you're looking for? Browse other questions tagged logic-gates basic or ask your own question.

0
Can I use 1 resistor for both inputs of an RTL NOR gate?
1
Identifying the logic gate needed for this problem
0
How to build a sequential logic circuit with transistors on a breadboard
3
NAND gate output doesn't change to logic 0 when expected
3
How to implement a function using just NAND or NOR logic gates
0
Why is there no race around condition in NOR SR latch when S=R=0(initially)?