Why will the line loss decrease when the power factor increase?

I have two questions about this:

However, my second thinking should be wrong, because the answer of the QA does decrease with the increasing of P.F.

There is a figure about my second thinking:

However, the cable doesn't know the difference between reactive current and the current used to generate real output power and, it produces higher \$I^2R\$ losses when the PF is 0.8 compared to 0.95.

We can know the unit of line loss is Watt(W),that is, the line loss is a real power,not apparent power or reactive power.

Consider that the current needed to drive real power into the load was 1 amp (for example).

This is because the information in the power triangle is also reflected by the current triangle: - 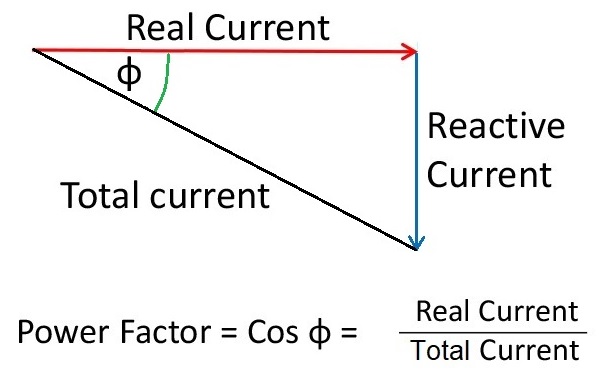 The current the cable carries is shown as "total current" above.

Well, let's first look at the definitions of the powers:

Not the answer you're looking for? Browse other questions tagged power loss or ask your own question.

1
Complex power using phasors derivation
0
Why are Watt's more common than VA's?
4
Why stepping up voltage during transmission considers \$I^2 R\$ but not \$\frac{V^2}{R}\$?
1
Why can't I get correct reactive and real power in what seems to be easy task
2
Is there a mathematical proof that reactive power regulates voltage?
2
Why should we multiply Copper loss with \$ (\frac{1}{2})^2 \$, not \$(\frac{1}{2})\$ when the transformer is in half loading?
0
Where am I wrong about my calculation of power loss?
0
In what condition,we can have \$P_{\Delta}=P_{Y}\$,not \$P_Y=\frac{1}{3}P_{\Delta} \$
1
Why is apparent power more important\relevant than maximum instantaneous power?