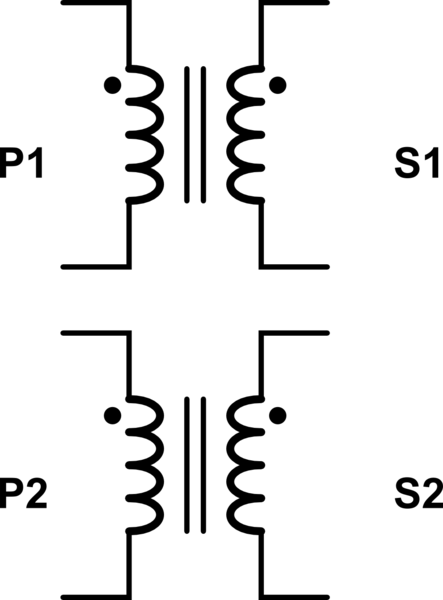 What is the proper way to wire such a transformer? Do both primary sides have to be wired to something in order to work? In my simulation, I'm only using one primary winding and one secondary as a bridge-rectifier, so the other one is not used at all. If I decide to make S1 and S2 center-tapped, will I have to use P2 as well?

First of all your diagram is showing 2 separate transformers. If it is one transformer there should be only one magnetic core like in picture below. There is no 2 primary winding transformer model in CircuitLab. So if you really need it you should create it.

A)"What is the proper way to wire such a transformer?"
You can wire in any order. Good practice is to wire all winding in same direction to avoid phase reversal.
B) "If I decide to make S1 and S2 center-tapped, will I have to use P2 as well?"
No. Just leave P2 ends not connected.

You should connect the two primaries in parallel for 120 V input, and in series for 240 V (assuming the transformer is designed for 120/240V input).

You must observe the polarity of the primary windings when connecting them - the datasheet should show the correct connections.

In parallel connection, identical ends would go together ('dot' to 'dot' and 'no dot' to 'no dot').

In series connection, opposite ends would go together ('dot' to 'no dot').

In practice, numbered terminals would be wired as per the wiring chart provided.

All windings would need to be used to utilise the transformer to its maximum VA rating.

Not the answer you're looking for? Browse other questions tagged transformer rectifier bridge-rectifier or ask your own question.