I am interested in using the SLB03070LR35 cell, which is a tiny cell that can handle 20C charge rate. What kind of charge controller can I use to recharge such a small cell? Would an LDO set to 2.8V with a current limiting resistor (120 Ohm, limits to 7mA from 2V dead cell to 2.8V max charge) be acceptable?

You are looking for chargers and/or BMS adapted for "Lithium Titanate" aka LTO cells, though I've never seen one that small before!

They are even less common (so far) than Lithium Iron Phosphate.

What's not to like : in bulk, only the lower capacity per kg (which isn't a real issue here, but makes them less attractive for cars). Currently also more expensive per amp hour capacity, but over 20000 cycles they pay you back handsomely for that.

By reputation they are also a lot safer (less fire risk) and work over a wide temperature range. IMO they could be a game changer where weight is less important and lifetime is, e.g. for power grid storage. I discussed the economics a bit here and that has only improved since. If you get 2 cycles a day out of them (for the morning and evening peak demand) the economics of grid storage start to look attractive.

Here's a slightly bigger one, with quite a lot of information. These cells seem to be popular in China, perhaps for grid applications. BMS adapted for these are available.

I have only limited experience so far, but : Treat roughly as Li-Ion except for the voltages. That is :

Charge cutoff point : Russell is effectively suggesting 100% of the CC value which will be safe, simple, and probably fine for your aplication, but 50% or 25% should give you a few more % capacity if that's worth the complexity.

In practice there's not a lot to be gained above 2.6 or 2.7V, or below 1.8V and using these should reduce wear and only lose a couple percent capacity. Most of the action happens between 2.3 and 2.0V, so treat "2.4V" as a little optimistic, and 6 cells is a better match for a 12V (car) battery than 5 cells.

And to answer your actual question : if you augment your suggested charger with current detection (measure voltage across the current limit resistor) and some means to cutoff charging when current falls to (your choice of value) you should be fine. (I would add a timeout: say 4 or 5 minutes since 20C is 3 minutes, as a safety measure if practical).

As Bryan notes, these are LTO (Lithium Titanate) batteries, a relatively new addition to the Lithium secondary cell range.

Advantages include 25,000 cycle life, 20C charge and discharge rates, and operation down to -30C for this version - and down to a claimed -50C for some versions. .
What's not to like? In this case - price, and very low capacity. For larger cells (eg see Bryan's link) the capacities can be much larger (eg 40 Ah in a single cell) and the cost per kWh is a few years behind LiIon pricing but still acceptable.

Based on the available data:

Based on specifications you could charge at up to 7 mA (somewhat less is probably wise) until a terminal voltage of 2.8V is reached and then immediately stop charging.

A suitable charger could be implemented with a 7 mA (or less) constant current source (eg LM317 and one resistor) followed by a 2.8V regulator plus a comparator that determines when the cell reaches 2.8V and terminates charging.

The voltage regulator is essentially only a precaution. A say 5 mA current source and a charge terminate comparator would serve as well if the battery was connected to the current source before the source was powered on.

In the datasheet below the charge/discharge graphs it says
"Charge CC-CV: CC at 1C to 2.8V then CV to 0.05C, at 25 C
So you could charge at 0.35 mA (!) unto Vbat = 2.8V then hold at 2.8V until Icharge drops to 17.5 uA. I suspect that a CC charge as above would suffice in most cases. Note that the stated 0.05C termination current is for road warrior full state of charge. Stopping at say 0.1C or 0.2C or higher will not reduce capacity by much amd will probably usefully extend cycle life and whole of life mAh storage.

Costs for this very small capacity cell are an arm and a leg, relatively
$7.32/1 Digikey for 0.35 mAh version here
No Digikey prices for the other versions :-(. 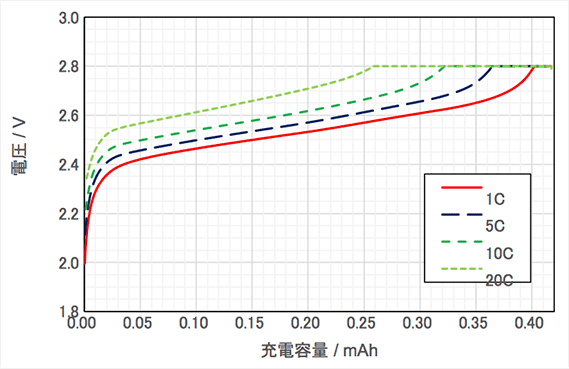